How to distinguish primary and secondary beam in FEM formulation?

Assume that I am writing a new FEM software for structural analysis, it shouldn't really matter whether this is a frame or frame+shell element analysis tool.

I understand that primary and secondary beams have their own function, and are designed for different use. 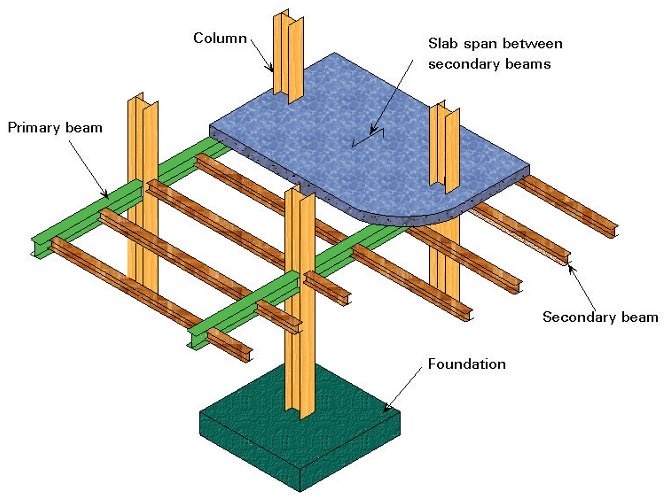 Primary Beam: A horizontal beam connecting columns (simply supported or shear connected.) Function: It will transfer the load from secondary beam(if present) to the columns.

Secondary Beam: A horizontal beam connecting primary beams (simply supported or shear connected.) Function: It will transfer the load to the primary beam and not directly connected to the columns.

In FEM, everything is just frame element, and all the beams and columns are equal, so whether one beam should resist more loads ( ie primary beam) than the other is completely up to the outcome of FEM procedure. But as engineers, sometimes we just want this one beam to take more loads than the neighboring ones.

How can I modify my FEM engine to do what I want?

You have some options:

Very few models can be accurately modelled in this way because in real life, there are many causes of nonlinearity.

Thus by providing a physical gap between the primary and secondary beams and setting up contact conditions, your FEM software will necessarily consider a contact nonlinearity condition. This might not accurately describe your model, but applying this method could force the simulation to only load the secondary beams after the primary beams have deformed by a certain margin.

Your description of what primary and secondary beams do is dramatically different to the definition given in the link you present (which is itself correct).

To quote the answer in your link:

Primary Beam:
A horizontal beam connecting columns (simply supported or shear connected.)
Function: It will transfer the load from secondary beam(if present) to the columns.

Secondary Beam:
A horizontal beam connecting primary beams (simply supported or shear connected.)
Function: It will transfer the load to the primary beam and not directly connected to the columns.

So all you need to do in your FEA software is allow the user to define how these loads are applied. You don't need to create different categories of beam elements (primary vs. secondary).

You are calling your software a frame analysis tool. This implies that 2D elements like plates and shells aren't available, only 1D beam elements. This therefore means that the user will have to take some decisions as to how area loads which are applied to the slab (which you can't model, since you don't have 2D elements) are transferred.

Also, the image in your OP is a poor example of primary and secondary beams because, structurally, they are identical. The secondary ones are a bit shorter, but they share the same top-level with the primaries. This means that when the slab transfers loads, it makes no distinction between them. Look at the tributary areas for each slab, it's clear the vast majority of the loads will naturally go to the secondaries, with only a small triangle of load going to each of the primaries. Therefore, when you model them there should be no distinction between them: the loads should go where they naturally wish to go.

However, if you're modelling something like the roof below, then you'll need to control how the loads are distributed. After all, all the loads coming from the roof need to go through the purlins. None of the loads may go directly to the rafters. 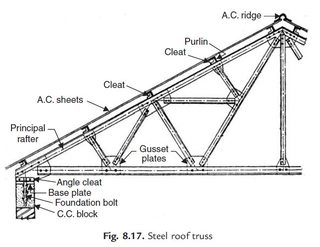 6
How should one model a structural model with both line elements and area elements?
4
Accidental Torsion and Equivalent Static Load for an irregular structure
1
How can I model beam column connection that doesn't connect at centerline?
1
How to incorporate moment release at beam end in FEM formulation?
4
Can secondary beams be supported to columns occaisionally?
1
What criteria must apply for torsional effects on this beam to be ignored in calcs?
0
Very confused as how to calculate the degree of static indeterminacy of trussed beam