I studied about the effect of turbine blade thickness on flow separation in following. The blade section is Naca 00 XX in this turbine.

The paper states that if blade thickness increases, separation on the blade delays. Why does this happen?

The paper also states: Blade (A) has lower torque than blade (E). Why?

In a isolated blade, the flow separates in the upper side due to adverse pressure gradient.

But in the case of turbines, It is well guided flow between the blades. So the effect of adjacent blades come into picture. for the same mass flow rate but different passagae dimensions, it alters the pressure on the blades such that the flow don't seperate. but there are cases in which flow seperates for the same solidity (no of blades or thickness of blades) with less mass flow rate.

We can also refer the below plots (from my own potential flow code.)

the above is coefficient of pressure plot for isolated airfoil. When we put the same aerofoil as a cascade of aerofoils(NACA 0012), We can see how the pressure distribution changes for different solidity. the outer most curve is for very less no of blades (~isolated) and the inner most profile is for high solidity. So we can't think it as a isolated blade anymore. we have to consider effect of other blades too. 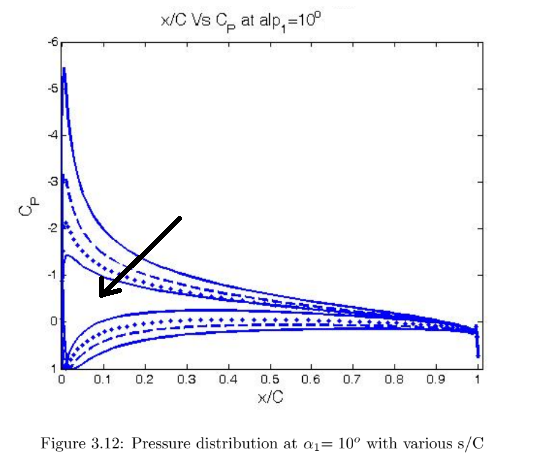 Hence we can't say there is a suction pressure on the upper side of cascade airfoil as compared to isolated. Hope this helps for your first two quastions.

Not the answer you're looking for? Browse other questions tagged mechanical-engineering fluid-mechanics turbines or ask your own question.

3
Aerodynamic Turbocharger Design
6
efficiency and flow separation
5
Wall functions and separation in turbine blade simulation
4
What is the exact meaning of "dot product of the pressure and viscous force coefficients on each face with the specified force vector"?
2
How do I set skewness correction in fluent?
3
Question about bounday layer thickness?
0
Pressure Coefficient with a Minima of 0 on Compressor Airfoils in Cascade