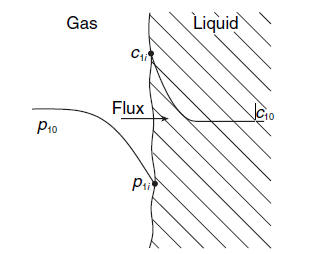 The flux in the gas can be written as:

How can I use this to find the overall mass transfer coefficient? I know that the driving force will just be $(p_{1}-Hx_{1})$ but what's $K_{g}$ and more importantly, how is it derived?

EDIT: I'll give the best answer to anyone who can even give a hint

Exactly what $k_p$ is depends on the flow of the gas. If the gas is stationary, mass transfer will by diffusion alone. Unfortunately, that process doesn't have a steady-state solution in a semi-infinite domain. If you had a thickness for the gas layer ($L_x$), $k_p$ would be:

Now, go with the idea that you've got some kind of flow.

With flow over a surface you'll end up with boundary layer, a thin region where velocity and species concentrations vary between their values at the surface and in the free stream. That flow is generally going to enhance the mass transfer, by actually moving things around a lot faster than diffusion (diffusion is wicked slow).

It is possible to cook up some solutions to the boundary layer equations and actually derive $k_p$. But that's tedious, only works in a few situations and the results are still approximate. What you actually want to do is look up a correlation. Like these:

Those'll give you the Sherwood number based on the Reynolds number and Schmidt number.

If you aren't familiar, the only thing that might be tricky here is choosing $L$. It's the characteristic length of the flow configurations. Usually, it's just the length of the object in the direction of flow. Except inside pipes, use the diameter.

Not the answer you're looking for? Browse other questions tagged heat-transfer chemical-engineering process-engineering diffusion or ask your own question.

4
What relationship is there between mass of water vapour produced in combustion and the energy lost through producing this water?
10
External diffusion: calculation of surface concentration
3
How do temperature and pressure influence the rate of evaporation of water in a closed vessel?
4
Modelling gas desorption from a still solution (e.g. a beer)
1
Boundary conditions at interface for1D transient heat conduction problem in cylindrical coordinates
0
How to compute wall heat flux q with just wall temperature