Selectively rotating (engaging/disengaging) one of 80 couplings on a small shaft?

I've been working on this problem for years (literally) and haven't yet found a workable, scalable, pragmatic, and cost-effective solution that would allow me to selectively rotate one or more of 80 discs closely aligned on a single, rotating shaft.

Unfortunately my background is in electronics and not in mechanics or mechanical engineering, and I'm unaware as to whether or not this can be considered a "solved problem" at this scale.

I have tried a number of different approaches (both conceptually and in prototype) but have constantly been stymied by the tight specifications.

Conceptually, something as simple as a gear translating rotation in one axis to another (perpendicular) axis, attached to each "disc" and actuated by a linearly-moving motor would do the trick:

One attempt I've used is to have a rotating "indexer" fixed to a spindle in the middle of the shaft (with the rest of the shaft being free to spin around the spindle), then moving that linearly while subjecting it to rotational movement when aligned with the disc in question (with a matching cutout in each disc mated to the shape of the shaft/indexer), but the need for extreme precision in order for it to move freely along the axis made it unworkable (along with the fact that the shaft/spindle now needed to be twice the width of the working surface. In the example below, the indexer would be 9b, used to rotate 11H without rotating 11G or 11I: 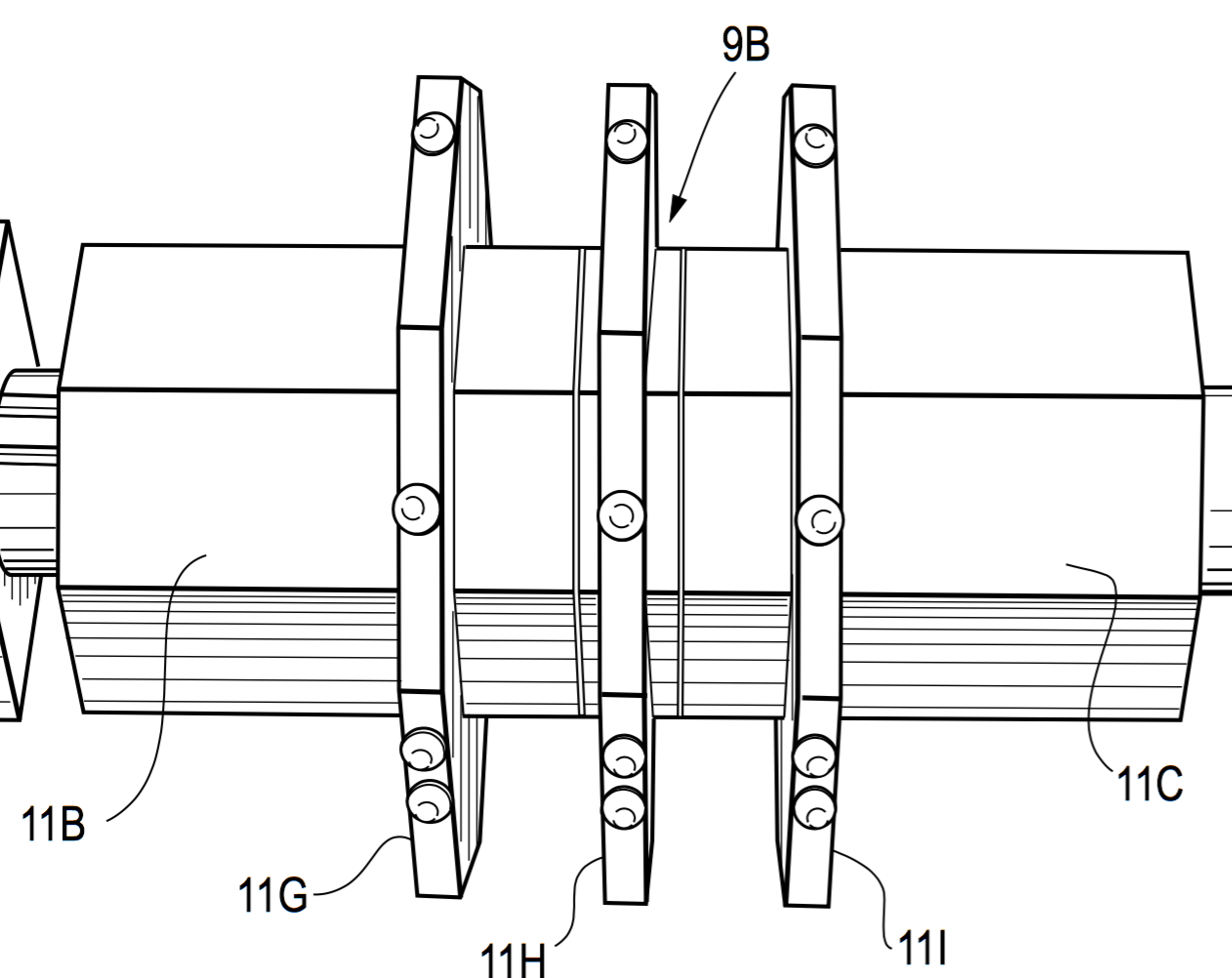 I know one solution would be a clutch of sorts - if one exists that would fit on/in each of these discs. Then the clutches could be mounted directly to the shaft, and the clutch for each disc (somehow, as of yet that's a big question mark) engaged or disengaged as needed when the shaft is turning to translate that motion to each disc.

I had an idea to use a "magnetic clutch" (if that is a thing) where rectangular strips of magnets would be mounted into channels in the shaft, then tiny magnets would be embedded around the periphery of the cutout in each disc. The idea was that when not "locked" in place by some external mechanism, each disc would (by magnetic force) rotate with a spinning shaft. When externally locked, the disc would then hold in place with the "clutch" disengaged as the shaft spun freely under it. Unfortunately, it seemed that even with neodymium magnets, the friction from the entire system was too much for the magnets and the discs were permanently in an "unlocked" position and would not spin with the shaft.

There is also the obvious solution of using pure friction. I have leeway in what material the discs and shaft are composed of, but I'm not sure if that's something that can be considered a reliable solution as it should last for hundreds of thousands of "disengaged rotations" without wearing out or losing friction.

I feel like I might be overcomplicating the problem. Bottom line: tiny discs, one rotating shaft. Selectively (preferably in parallel, but one-at-a-time is fine) rotating each of the discs, without needing tolerances only achievable in a factory and at a affordable price (let's say under $100).

Depending on the rotational speed and the torque required, you may be able to use something that resembles a pin tumbler lock (I can't put more than 2 links in a post so no link to Wikipedia..)

(pins are red, shaft is black) 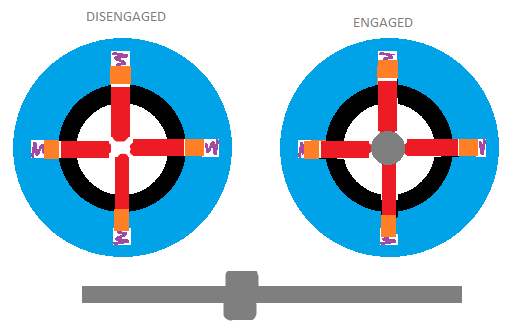 (inner rod is gray, disc is blue, disc pins are orange and springs are purple)

That's just general idea and maybe it's a little gimmicky, but it is another approach.

Band brakes around each disk.

What you do to the disk itself depends on the use case:

if it's unloaded, like an indicator like a digit in a mechanical computer, friction couple it to the shaft (which must then be capable of driving 80 times the friction torque of each disk).

If it has to transmit power, the band brake can hold the outer ring of an epicyclic gear. That'll allow efficient slippage and transfer of the motion to something else (in the 2mm gap between disks).

Each band brake is just a length of spring steel like a watch spring, wrapped round part or even most of the disk depending on the torque required ... one end is fixed, the other is either tightened or slackened by some actuator ... the keyboard from a mechanical typewriter?

Not the answer you're looking for? Browse other questions tagged mechanical-engineering design architecture or ask your own question.

4
How to secure a rotating disc so that it has no wobble
0
Control the rotation of multiple discs along the same axis
0
How can I couple two shafts along the same axis so that they rotate together, but only one shaft is allowed to drive the rotation?
2
Is it possible to move gear on a shaft in one moment and in the other allow it to rotate freely?
0
Name of this type of platform lift
1
Engaging and disengaging drive power
0
How to build a steel flat bar rotating mechanism using an axle hollow shaft?