By what factor should I scale some tapered legs to make my harpsichord stable?

Not sure how to ask a question usefully, as I'm not an engineer, but here goes. I have a harpsichord, essentially a sort of triangular slab (I'm assuming a general answer, though I could provide specifics) for which I've turned 3 tapered legs, each set in some distance from the edges, and attached securely with 4 screws. But the instrument wobbles extremely easily: if you push it on a side with one finger it's easy to move it half an inch or more. So I'd like it to be "stable" instead of wobbly. Each leg is 2.75" square at the top and at the bottom is a circle with diameter .675". Here's an early version of the leg (its final dimensions are slightly different), but very close to the present version:

Here are the legs in context: 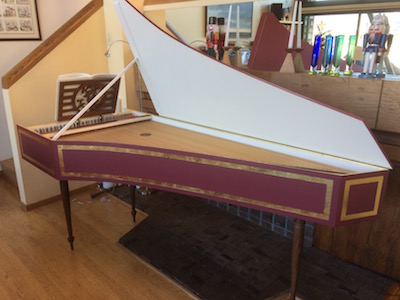 My question: By what factor do I need to scale the thickness of the present legs (height is constant) to make the instrument "stable?" I'm not sure how to define stable, but the point is, it should only wobble with "significant" effort, not minimal, one-fingered effort. I'm pretty sure that if the thickness was increased by a factor of 10 it wouldn't wobble easily, as it would be resting on tree trunks, practically. But what's a reasonable number? 1.5, 1.7, 2.3? I have no idea, but I'd be grateful for your suggestions.

Edit in response to the answer: I'd like to avoid redesigning with bracing. And I've already made a large plate, which is the bottom of the instrument. Assuming a rigid connection with the legs, wouldn't increasing the thickness improve stability?

The thickness of the legs is not the important thing. There are plenty of historical instruments with legs no thicker than yours, for example see here.

The problem is how the legs are attached to the instrument. The easiest way to make a stable design is to put some bracing between the legs, so the legs effectively form a stable "trestle table" and the instrument just sits on top of it. Here is a simple example - admittedly, with legs somewhat less elegant than yours. I would expect there would be bracing pieces at the top of the legs, as well as the ones you can see at the bottom.

Of course people sometimes took this idea to extremes, as in this example (copied from a 17th century design).

Alternatively, you could try making a large "plate" (say 6 or 7 inches square) securely attached to the top of each leg (e.g. with several recessed screws plus glue joining the plate to the square top the existing leg) and then fix the instrument to the plate with a bolt at each corner.

If the legs are simply screwed at the joint, then they should be considered pinned to the base of the instrument. This means that the angle between a leg and the base (initially equal to 90°, with the leg vertical and the base horizontal) can change: under a horizontal force such as your finger, the leg can move away from the vertical while the base remains horizontal. This is because a simple screw setup as you've described isn't capable of forcing the leg and the base to move in unison; small relative motions are allowed.

Now, if the joint were a perfect pin, then the structure would be completely unstable: any horizontal force whatsoever would cause the structure to collapse. The reason this isn't the case is because the screws do generate some level of "fixity" between the leg and the base.

So, looking at two legs, the structure can be modelled thusly (see note regarding this modelling at bottom of post):

The black bars represent the original shape, while the blue lines represent the deformed shape due to the horizontal load. The value pointed out is the horizontal deflection. It is unitless because this model is utterly symbolic: I don't know the real distances, actual materials used, the thickness of the floor of the instrument, how the screws were placed, etc. Just use these values to compare (in broad terms) how the solutions described below will improve your situation.

Now, as @alephzero mentioned in their answer, there are a few solutions to this problem.

One they describe is by strengthening the joint between the legs and the base. The extra screws and glue would try to turn this partially-fixed joint into a fully-fixed (or at least more-fixed) one, which could dramatically reduce how flexible the structure is. 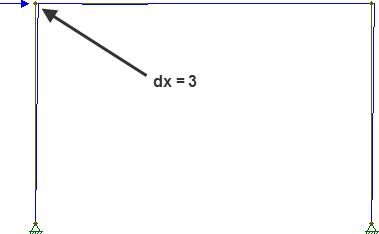 Another option would be to create bracing in the structure. @alephzero suggests bracing at the feet of the legs. Here's the result considering partial-fixity between the legs and the base and the legs and the bracing. 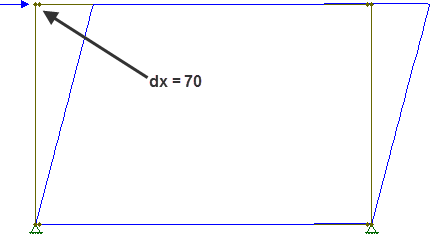 However, a very similar result can be obtained with bracing that is placed just below the joint. 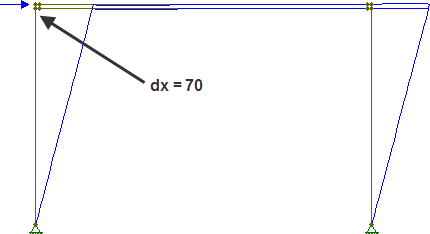 It becomes clear that the stiffest structure is when you make the joint between the leg and the base of the harpsichord perfectly fixed. This is however quite difficult and I don't believe @alephzero's suggestion would be sufficient. You'd probably need to use steel L-shapes or wooden wedges (see here and here for examples) on all four sides of each of the feet in order to achieve anything close to full fixity.

Therefore, I believe the solution of creating bracing just below the base of the instrument is also a good alternative. This is the concept behind tables where there's bracing just below the tabletop (usually touching the tabletop, even). This one, for example (and some others can be seen here). Would they do better with bracing at the feet? Yes, but this already helps tremendously.

I created these models in Ftool, a free 2D frame analysis tool. It's my go-to for simple models such as these, but it doesn't allow for partial fixity, so I had to improvise. You'll notice that the joints between the leg and the base have a second node right next to them. The bar segment between these nodes was given a moment of inertia orders of magnitude smaller than that of the horizontal bar representing the base. This allows these short segments to deform with great ease, simulating partial fixity to some extent. Obviously, the results shown here depend greatly on the ratio of the segment's and the horizontal bar's moment of inertia. If the segment's inertia were equal to the bar's, the joint would behave as if fully fixed. If it were equal to zero, (the model wouldn't run, but even if it did) the joint would be perfectly pinned and the structure would be unstable. I don't know how one would convert this improvised method to an actual partial-release hinge.

So here are the results for different ratios. In the models above I considered a very low ratio (0.15%) since such connections are usually modeled as pinned. You'll notice, however, how for ratios as of probably around 5% the braced solutions perform better than a perfectly fixed joint with no bracing. Obviously, a fixed joint with bracing would perform even better.

Not the answer you're looking for? Browse other questions tagged mechanical-engineering structural-engineering design or ask your own question.

2
Miniature electric or manual jacks?
3
GIM Mechanism Software (Kinematics / Analysis / Synthesis)
5
How effectively would a typical liquid CPU cooler cool a 15“x15”x1/8" sheet of aluminum?
3
Stability issues in gateleg table design
1
2 motors on same shaft but 1 is off. How does that work?
1
Advice on suitability of corner joints in welded frame
19
What is the purpose of building foundations?
1
Extendable apparatus