How do I update an individual control chart?

I'm finding myself using control charts and I'm unclear on a very basic point. I've read page after page of texts, but they all focus on how to make the initial chart rather than walking you through how to update it.

To make things easier, I'll set the situation: I'm making an Individual Control Chart. Every thirty points, the chart is updated. In January, I put points 1-30 on the chart. February, I put points 31-45 on, and March points 45-60. So, the chart needs to be updated now. Where do I go from here?

Assuming none of the data points were out of control, here's what I think happens: I think points 1-30 are removed from the chart. I think the chart has the average and control limits calculated using data points 31-60. I think that future points (61-90) are plotted on the newly updated chart until data point 90 is reached, at which point the chart is updated, points 31-60 dropped, and the average and limits recalculated using points 61-90.

I am aware that the limits for updated versions of the chart should be calculated using xbarr +/- 3s/c4.

So, using the power of randbetween, I've made some sample charts and sample data. The first is for the month of January, where data was taken every day, giving 31 data points, and at the end of the month, the chart that follows.

And a bunch of values for the dates stretching out over the next few months (I can post all 60 rows if really desired). 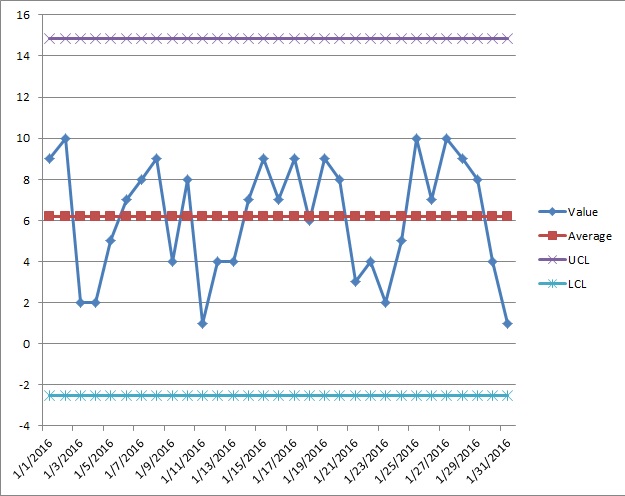 Okay, so I've plotted the first 30 datapoints. So far so good. In February, only 15 samples are sampled for data. The datapoints are added to the chart for a total of 45 datapoints on the chart: 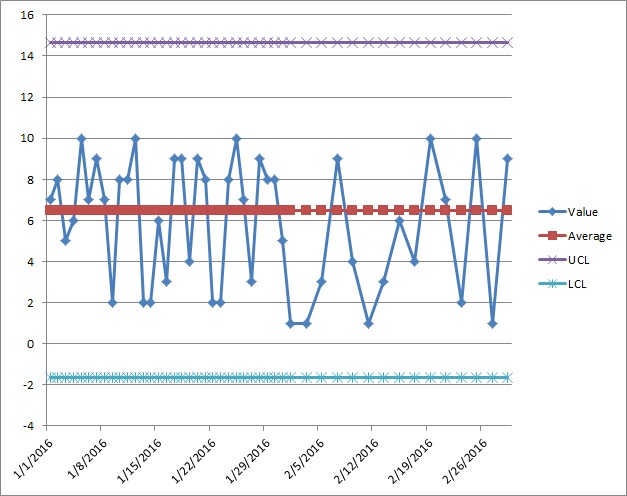 In March, another 15 samples are sampled and this brings the total number of datapoints up to 60: 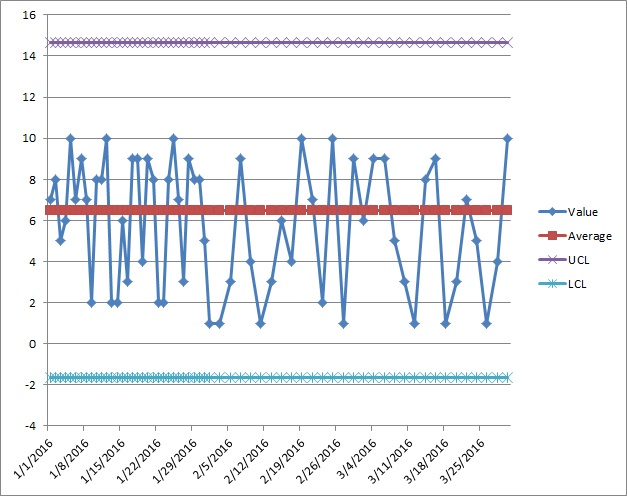 Now at this point, I know that the chart must be updated. But there are a few ways I can do it. One of which is to remove the January data (the first 30 datapoints) both from the chart and from the calculations and only plot datapoints 31-60, with datapoints 61-90 being plotted on this as well (at which time, we would go through the process again): 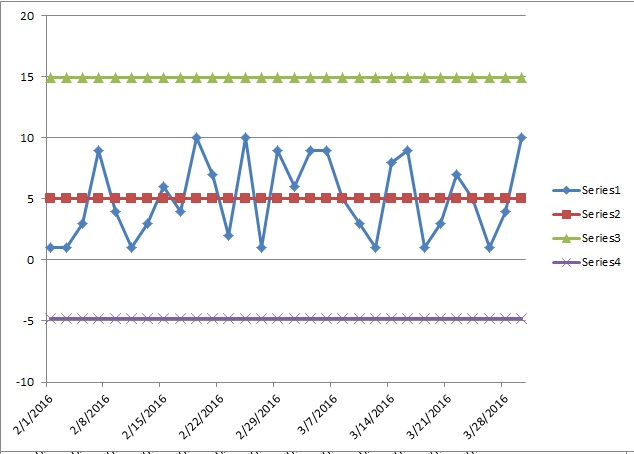 Or I could calculate the average, SD, and the upper and lower limits based on datapoints 31-60, but plot datapoints 1-60: 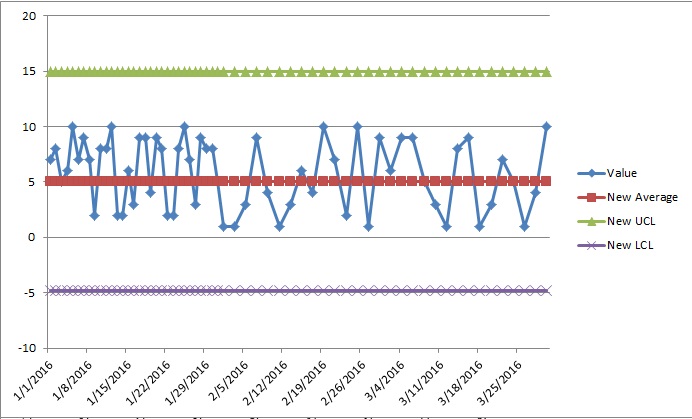 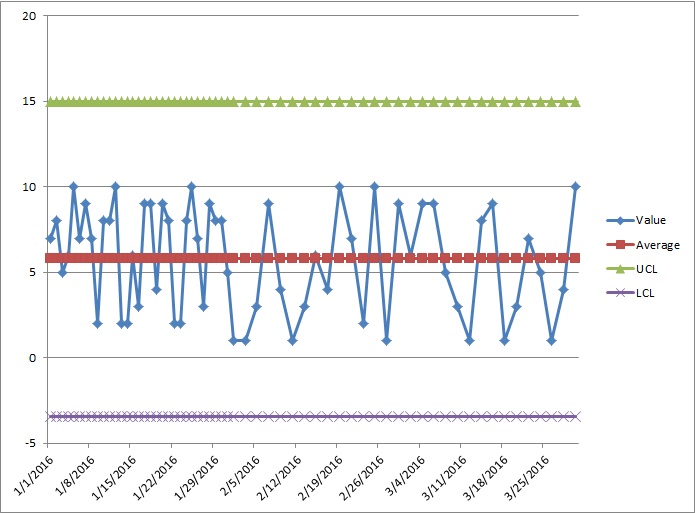 All of these give different limits, different charts, and all of them seem equally valid because nowhere does it seem to discuss what you do to actually update the chart once it has been made.

Out of desperation, I got in contact with some very nice statisticians at NIST. They walked me through the answer to my question, which boils down to: control charts are an empirically derived chart with strong statistical backing. However, because of this by its very nature, there is no one right answer. It depends on how historically stable your process is, whether or not new changes need to be accounted for, etc. You have to have an understanding of your data, an understanding of what is relevant and how that will affect your data in order to correctly decide. It's a judgement call based on someone who understands the process enough to be able to call when the limits and such are clearly incorrect and must be done a different way. Hope this helps anybody in the future needed help on control charts.

Not the answer you're looking for? Browse other questions tagged statistics quality-engineering or ask your own question.

5
How to compare utilization rates?
2
How to determine if an engineering process is stable and capable?

12
How can Pareto Analysis help solve engineering problems?
6
How can the vendor be approved/disapproved based on validation test data?
2
How to determine if an engineering process is stable and capable?
5
How to compare utilization rates?
7
How to identify low quality electronic components early?
4
How do products like the overheating Snapdragon CPU make it through quality control?
4
How can I better structure documentation for a quality control process?
4
How to display data with three degrees of freedom on a chart?
3
How do I include statistical significant index in bar chart in excel?