How does a frequency to voltage converter work?

I am measuring the rotational speed of a shaft using a disk with 60 cuts and an optical fork. The signal from the optical fork is sent to a frequency to voltage converter and after that to a data acquisition system.

What is the working principle of this frequency to voltage converter? Is it counting pulses?

There are a number of ways.

As Russell described, one way is to make a fixed size pulse each period, then low pass filter the result.

Another is to make a frequency-dependent filter. Feed in a signal with fixed amplitude and varying frequency. The filter varies the amplitude as a function of frequency. You then make a AC to DC amplitude converter, often called a "detector". Such a detector is at the heart of a AM radio, for example.

You can have a bunch of narrowly tuned circuits in parallel, then see which one has the highest response to the input signal.

You can sample the input signal, convert it to digital values, and run a FFT (fast fourier transform) on them.

If you are expecting only a single input frequency, you can tweak a oscillator to attempt to mimic that frequency. If the oscillator is voltage-controlled and you do this in a feedback loop, then the control signal into the oscillator becomes the voltage signal indicating the input frequency. This may sound far fetched, but this method is common enough to have a name. It's called a phase locked loop (PLL), and you can get PLL chips that do most of this for you. Most newer (last 40 years or so) FM radios work on this principle.

As a general guide:

One method is to provide a pulse of fixed width every time a slot passage occurs.

The history of FVCs, basically and chronologically, goes as follows:

If you want to see how the FVC came about then here is an interesting historical explanation, from basics: What's All This Frequency-To-Voltage Converter Stuff, Anyhow? It is written by Robert A. Pease, the guy who designed the LM131 for National, so this information is straight from the horse's mouth, so to speak. A PDF is also available from there.

I will attempt to summarize the article below:

Thirty years ago, a guy asked him if he could show him how to make a Frequency-to-Voltage converter (FVC), while he was working at at George A. Philbrick Researches. He designed a charge-dispenser made of a voltage limiter, a capacitor, and diodes. Evidently, it worked pretty well.

In 1964 he put a new version into the old Philbrick Applications Manual. 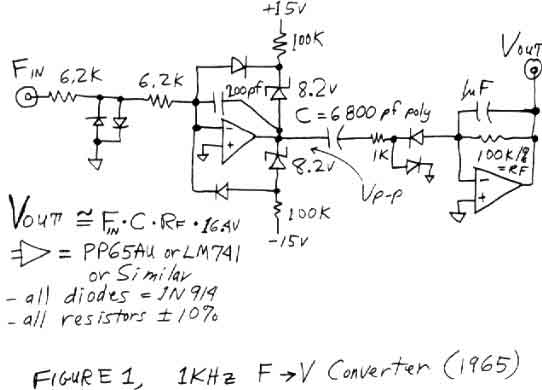 The first amplifier has a limited output voltage. The p-p voltage across the capacitor is pretty well established:

So, the charge (Q = C × V p-p) flows through the feedback resistor of the second amplifier. The output voltage will be, on the average:

A few years later, he got into the Voltage-to-Frequency Converter (VFC) business and at the same time, he came up with an improved circuit for an FVC (see figure 2). 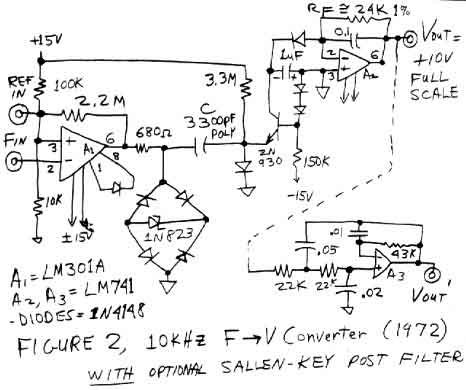 The real improvement in this FVC was the bleeder resistor, the 3.3 MΩ added to the right end of the capacitor.

After he left Philbrick, he joined National and designed the LM131 voltage-to-frequency converter3, using completely different ideas than any of the Philbrick circuits.

In 1978, he wrote an application note on how to improve the response time of an FVC—in the Linear Apps Handbook.

I showed how to cascade two or more fast Sallen-Key filters to give reasonably quick response, yet filter out the ripple at 24 dB per octave.

In 1979, he wrote another App Note showing how to use a phase-locked loop to make a quicker F-to-V converter, about 2 ms.

That's about 10 cycles of the new frequency—a further 20:1 improvement.

Recently, a guy asked him how to make a 60-Hz FVC with quick response and negligible lag or delay.

I told him that the standard procedure is to use a fast clock and a digital counter. But the number of counts collected during one period is linearly proportional to the period of the signal, and you might have to do some digital computations to convert that to a signal representing the frequency. Then I realized that a "multiplying" DAC can be used to divide in a reciprocal mode.

He built it up and it worked. This Frequency-to-Voltage converter settles in one cycle of the frequency and uses only a small number of parts. 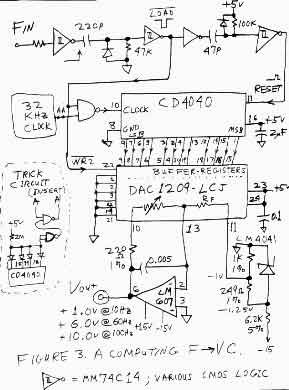 The digital logic generates a couple of pulses at the time of each rising edge of the incoming frequency (you could use some kind of dual one-shot multivibrator, but I didn't have any of those around). The first pulse loads the data from the CD4040 into the DAC (the pulse also disables the path from the clock to the counter to avoid any confusion from rippling in the counter). Then the second pulse resets the counter.

The MDAC has storage registers built in, so the data from the counter is fed right in to the DAC when the WRITE-2-bar pulse is applied. The MDAC isn't connected in the normal way, with the variable resistance in the input path. The fixed resistor is in the input, and the impedance controlled by the Digital code is connected as the feedback resistor. This permits the multiplying DAC to act as a divider, so the reciprocal function is done neatly—not in the digital realm, and not in the analog world, but on the cusp between them. (More on this in a few months). The LM607BN was chosen for the op amp because you need low offset. It's cheap, Vos is only 25 µV typical (60 µV max.), and you don't need a trimmer pot.

I seriously recommend that you read the original article, as my abridged version has, unfortunately, had to leave out most of the salient technical facts.

Not the answer you're looking for? Browse other questions tagged measurements or ask your own question.

6
Can redundancy be used instead of periodic calibration?
0
How do I sense reflective tape such as on a spinning wheel?
0
How to get natural frequencies from accelerometer measurements?
0
How can I measure the coefficients of friction of pulleys?
0
How do engineers work with extremely small objects?
3
Mechanism for controlling the clamping force
0
Safely Measuring Voltage from Solar Panels in an Experimental Research Field