Sketching an engineering system in healthcare

I am about to do a project about engineering systems in a Systems Engineering course.

I need to sketch an engineering system in which clinical decision support systems are being used to diagnose patients by a medical doctor/physician. It doesn't have to be fully correct. I just need to show that I understand how different actors/subsystems interact with each other, and who have economic/political/social interest in this system.

I have tried to sketch something, but I'm not sure if it makes sense. 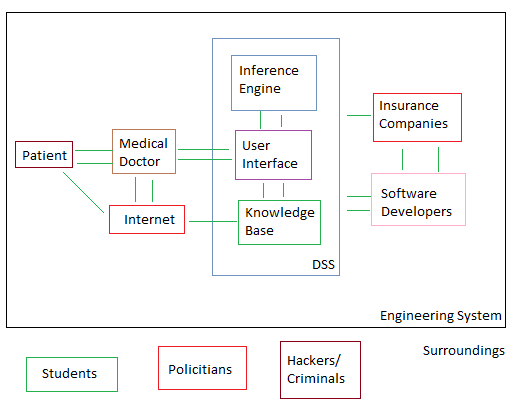 I imagine that a patients contacts his/her doctor. They cooperate to figure out what is wrong with the patient. The doctor enters some information into the (intelligent) decision support system (=IDSS). The IDSS has a user interface, an inference engine and a knowledge base. The knowledge base gets its information both from doctors entering stuff but also from the internet.

In order for this to work, there must be some software developers who build, maintain and control the system, but also some insurance companies who will cover any costs if something goes wrong.

Outside of the system, there are students or researchers who potentially can benefit from using the system, both by learning but also by searching for patterns in the huge amount of data. There are also politicians who are interested in this system since the system potentially is more efficient and reduces human mistakes. But there are also hackers or IT criminals who want to gain access to this data.

I know this is kind of a fluffy assignment, but I just need some good advice, so I really hope that you will help me out.

Have I forgot something in this system? Is there something that doesn't make sense at all?

Browse other questions tagged systems-design systems-engineering or ask your own question.

9
Is systems engineer an IT profession or an interdisciplinary field of engineering?
2
Simulation of First Order System (Matlab & Simulink)
5
Is there a term for a circular dependency in system design and engineering
3
Approximating a Gimbal using Springs and Dampers
2
Mechanical System Transfer Function - Systems Modelling
0
Solar panel actuator control
0
What are the drawbacks of inceasing the bandwidth of the system?