How it will damage the system if they are not shut down?

The electricity grid has very very little capacitance. That means that in any and every second, the energy going into it, has to come out of it too.

For example, by blowing up equipment.

One of the routes for excess energy is to make synchronous spinning things on the grid, spin faster (i.e. the grid frequency increases) - some motors, for example. Some of these will quickly exceed their intended speed.

Another thing that happens with rising supply, is that grid voltage increases. Some equipment will respond by using more energy, which in some cases can lead to faster burnout. Electrical equipment will tolerate some voltage variation, but after a point, increasing voltage will damage it.

In order to give equipment manufacturers some certainty, limits are set on how far the grid frequency and voltage can vary away from their nominal set points. The system operator will adjust supply and demand to keep frequency and voltage within their limits. One way to stop frequency and voltage getting too high, is by reducing or stopping the output of some generators. Another way is to bring more demand online. All these rules are contained in the Grid Code: each system has its own.

There will also be environmental and economic reasons. Since electricity can't be stored in this context, why make more when it's not needed? You can decrease your emissions for the year, including carbon payments. Emission legislation is so onerous these days (in the UK) that we're actually closing some power stations to save carbon. You can also save fuel. And if you never had excess capacity, you could never service or replace the generators. Since it takes 12 hours to spin up a fossil fuel power station they can't be blipped on /off anyway.

The truth of my answer could be proved at finding out whether solar /wind /hydro power plants shut down at surplus times since they run for (effectively) free.

First, conservation of energy says that power input equals power output. For all intensive purposes, the grid does not store any power. Even if there were battery systems tied to the grid, they would be treated just like power generators and not really be part of the grid because of the DC to AC conversion process.

Utilities in first world countries hold tight tolerances on AC grid power. By design, the voltage and frequency change very little, regardless of the amount of power being transferred.

In the United States a frequency 60Hz is held perfectly to the tolerance of the atomic clock in Colorado. Many low cost alarm clocks rely on this for time keeping. This very constant frequency allows AC motors to have a constant RPM, transformers to have predictable performance, and permits for much easier management of grid power over long distances.

To maintain this frequency, the utilities closely monitor and control the rpm of their turbines with with computer control algorithms. For example, if it cools off mid-day and lots of thermostatically controlled air conditioners turn off; the load on the system decreases. The computer algorithm will then quickly see that it needs to decrease steam input to the turbine to reduce power output in order to maintain 60Hz. It works just like "cruise control" in a car; it presses down on the accelerator as needed to maintain your set speed.

Voltage is also kept very constant; with consumer voltage ranging between 115VAC and 120VAC. In my experience the voltage will be different for different locations, but less than 0.1VAC variance at a location when not in a transient state. Regulation of the voltage is a little more complicated, but also computer controlled.

So from a power production stand point, no turbine ever needs to be turned "off", but turbines on the grid do need to be throttled up and down as the demand load changes. The logistics of this may result in some turbines being shut down because it is often more economic to operate a single turbine than it is to operate two turbines at lower output. For example one running at 60% capacity instead of two running at 30% capacity. Turbine operators and computer algorithms smoothly handle these transitions so an end power user never notices a difference. There is always excess capacity ready to handle changes in load.

In the photo below (from wiki) you can see many types of power production interconnected. Nuclear shields its fuel rods to regulate steam production, natural gas and coal reduce fuel input to regulate steam production, and hydro uses low loss valves to regulate water flow. Solar, with the proper electronics could regulate its output, but generally does not because it coincides with peak air conditioning loads and is always utilized 100%. Modern wind turbines with adjustable pitch blades also throttle their production. 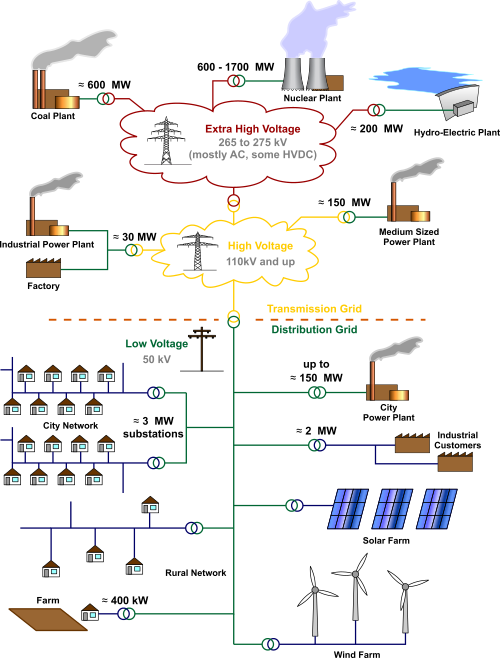 If a controller went bad on a turbine attached to the main electrical grid, it would begin to lead (produce too much power) or lag(pull power from the grid). Once the amount of power it pulled or pushed was too much, it would trip its breakers because of over current and be safely disconnected from the grid.

It is possible for an isolated single-turbine grid (like a back-country hydro turbine) with a control system failure to operate at too high of frequency or too high of voltage. This will destroy sensitive electrical equipment like DC power supplies and over speed AC motors. The main electrical grid however, has many systems in place to prevent that from happening.

13
How different are dc motor designs from dc generator designs?
23
Why doesn't a lightning strike destroy the lightning rod?
7
Does a 3-phase electricity grid need to be synchronised and are the phases split between houses?
7
How to apply power flow analysis?
1
Why is more steam required to turn a steam turbine when electric power consumption is higher
2
Why GPS receivers are more sensitive than GSM or WiFi receivers?
2
What (if any) are the engineering limitations for producing "simulation" exoskeletons
1
Why do identical-looking power plugs randomly not fit in some sockets in the same power strip?