I'm trying to design a metal surface with micro-perforation for a product and light it from other side with LED, such that the perforated pattern appears only when lit.

In my previous prototype, which used laser drilling (20 micron holes) for perforation, there was considerable warping of the metal film (around 0.3 mm thick) which rendered the prototype unusable (aesthetically)

Another problem I had with the prototype was that the light was not getting through perforation evenly i.e., I was not able to see the light from different angles.

I am trying to achieve the appearance like shown below 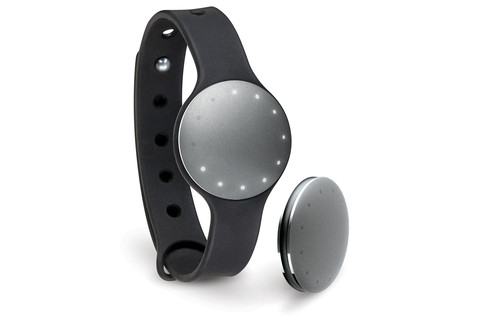 Misfit Shine fitness band; the micro-perforation on dial is invisible when unlit.

If you can use metalization to create your film, you could create a mask in the required pattern and just coat on top of it.

However I assume you only have a laser at your disposal. Your heat affected zone will depend on the speed at which you remove material. Higher power will tend to drill through faster and affect a smaller area but it may create more warping as you create a steeper heat gradient. There are two things I can think of trying that worked in other applications:

What about using a sintered metal? Powdered metals can be mixed and an acid might be able to remove one metal in specific spots allowing the light to shine through.

Not the answer you're looking for? Browse other questions tagged metals lasers drilling or ask your own question.

5
Metal spring thermal expansion
4
Frequency dependence of electromagnetic shield metal
4
What diameter hole will a twist drill bit of a given size actually make in a piece of metal?
2
How to handle reflections when cutting metal with a laser?
2
Is there a drill adaptor or attachment tool for cut a metal solid cylinder
1
Why are fine metal filters made of meshes?
0
What are these metal cylinders often found in the streets of London?
1
How does the magnet sheet sliding metal mechanism work?