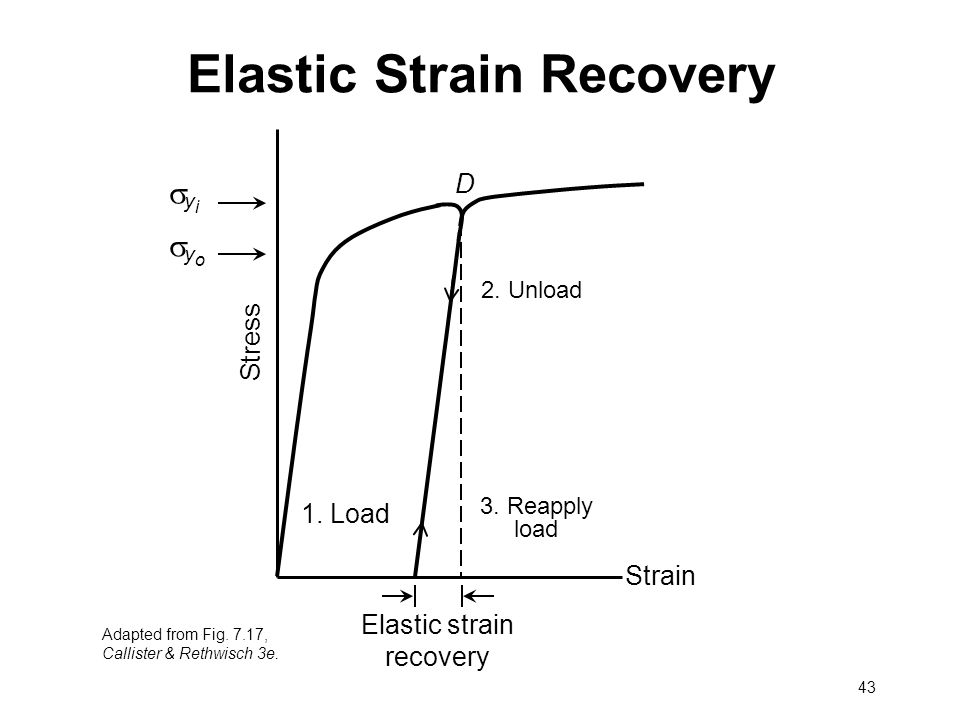 I know that with strain-hardening you increase the yield and tensile strength. So if you unload at point D, then you also have cold worked it a bit right? So the stress-strain curve will look different after point D and have a higher tensile point?

Summary: If you are loading and unloading the same sample, the stress-strain curve will not change and the tensile strength will be the same, because stress and strain are calculated from the initial geometry. If you are comparing two otherwise-identical samples with different levels of cold work or strain hardening, their stress-strain curves will be different and they will have different tensile strengths.

If you unload at D, then retest the sample (assuming necking has not yet occurred) it will effectively pick up where it left off. The stress-strain curve will follow the right-hand elastic curve (straight line) portion of the diagram back up to point D, and will then continue deforming plastically.

Put another way, by unloading and then starting the test over you shift the origin of the plot to the right, to where the end of the unload line is. Note that from the new origin, D becomes the yield point, which is higher than before, and the elongation at failure is reduced because it is closer to the origin.

If you retest the same sample, the tensile strength does not increase. If you instead compare two samples of the same initial geometry and material, except one is as-annealed and the other is cold worked, the latter will have higher tensile strength. The reason for the discrepancy between the two scenarios (retesting vs two differently worked samples) is that plastic deformation has changed the geometry in the former scenario.

To properly reflect the change in material properties when retesting would require measuring the narrower, longer sample and computing the new stress and strain curves from the new values after unloading. If that were done, the tensile strength recorded for the retested and remeasured sample would be higher than the initial test (stress increases as area decreases). Using the original geometric measurements would cause the sample to continue following the same stress strain curve. Another way of thinking about it is that retesting the same sample is like comparing two samples with different cold work and different geometries, but basing the calculations on only one samples geometry, in such a way that the curves are identical.

2
Springback after a plastic deformation

4
How to Compute Total Strength of Composite Tensile Bars
4
Why is strain also normalized to the parameters of engineering strain?
4
How does a graph with tensile stress-strain curve and compressive stress-strain curve superimposed look like involving true stress and true strain?
4
Determine the maximum possible yield strength for a single crystal of Fe pulled in tension
4
Why are the processes called "Precipitation Hardening" and "Solid Solution Strenghtening"?
6
Does the ultimate tensile strength of a material have a physical meaning?
2
The Bauschinger effect
1
Stress strain curve stress and resilience