What is the analytical approach for a fiber cutting machine?

so today in the Lab I came up with this problem (see picture). It shows a cross section of a cutting machine. There's a blade moving with a constant speed $\frac{dx}{dt}$ towards the center of the roll made up of wood. This roll is turning with a adjustable speed $w$. Let's assume we keep $w$ also constant. So the questions I ask myself are as follows: 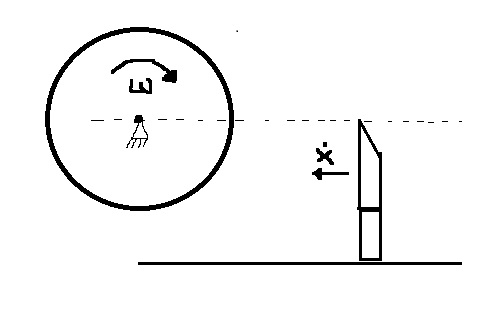 Through careful consideration of the problem, I found the answers to 1) and 3).

Yes the thickness is influenced by $w$. For 3) it can be said that after one rotation of the roll, the fibers have a constant thickness. By observing the contact point on the wooden roll it can be seen that the point makes a spiral towards the center. Basically what is missing now, is the analytical/mechanical approach and mathematical formulation for this spiral.

Your rotation speed $w$ is an angular frequency (usually denoted with a small greek omega $\omega$, by the way). And its just what its name says: the change of angle of your roll in a certain amount of time. What is probably confusing is that the cutting velocity changes as the blade moves toward the rotation center of your roll. This is because the circumference depends on the radius.

The rotation period is $T=\frac{2 \pi}\omega$. The thickness of your fibers are defined by the distance the blade travels during one rotation period. With the velocity of your blade $\dot x$ this amounts to $$ t= \dot x \cdot T = \frac{2 \pi \dot x}{\omega} \quad\mbox{.} $$ So as long as the ratio between angular velocity $\omega$ and blade velocity remains constant, the thickness is constant, too. This answers your questions 1 and 3.

7
Special Considerations for Steel Plate Marketed for Laser Cutting
6
What is the Boussinesq approach?
0
Methods for cutting glass
0
Building a cooling system for a kneading machine?
0
Why do they vacuum pump the carbon fiber fabric?
0
What is the white fiber in the copper wire of headphones?