Actuate a tilting platform from a single point

I would like to be able to tilt a platform (the green cuboid below, pivoting around the red point) from a single solenoid (one of the blue cylinders below). The solenoid cannot move (other than the shaft) and can only push (or pull).

Any ideas would be really well received! If I can clarify in any way, please let me know.

Sounds like the mechansim in a "clicky-top" ballpoint pen. You'll need a rotating cylindrical ratchet mechanism; the solenoid plunger moves inside this cylinder.

Here's a drawing from quora.com 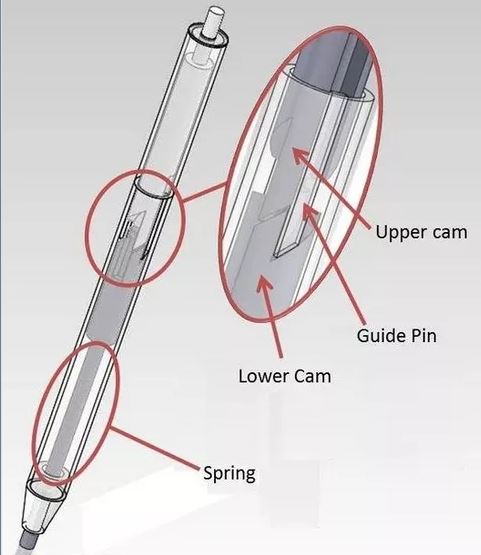 There is another mechanism I once found on a ballpoint pen which I made a simple sketch of:

In the ballpoint pen, the two hooks on upper and lower wall are not at the same location, but one is further left than the other. This causes the wedge to rest at two different positions, which is what you want in a ballpoint pen. But this is probably not important for your application.

Probably you can adapt this mechanism to your problem.

Not the answer you're looking for? Browse other questions tagged mechanical-engineering actuator or ask your own question.

2
Miniature electric or manual jacks?
2
Airflow selection mechanism
1
How can I deliver a measured amount of liquids through a tube?
2
How to make a cyclorotor?
0
precision positional control needed for shifting position of lenses
2
Rotating Control Panel for Arcade Cabinet
1
Rotate rack while keeping it engaged with gears
0
Why is there still no truly omnidirectional treadmill? (technical reasons)
0
Name of this type of platform lift