How do I find the closed loop pole at A? 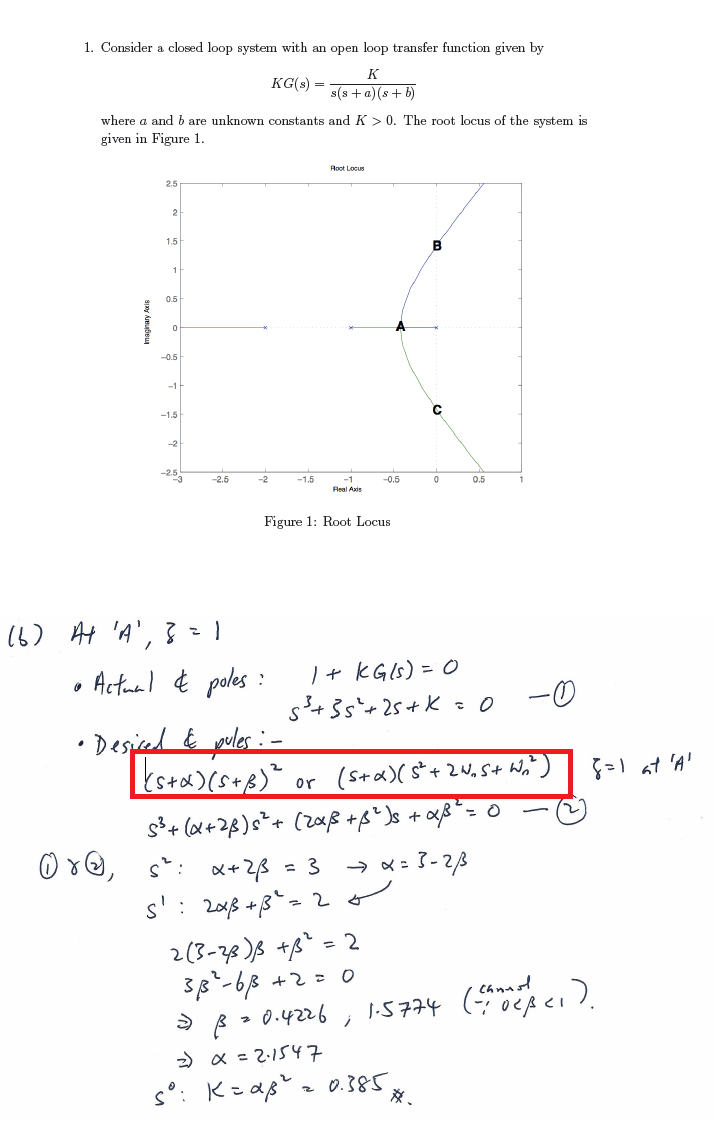 This is the question

What is the damping ratio associated with the pole at A'? Using the values of a and b from (a) above, determine the closed loop poles atA' and the corresponding value of K for this pole. Do not read the value of `A' from the gure.

The above is the answer provided by the lecturer. I understand most of it except that I dont understand how did he get the expression highlighted in red. Could anyone explain to me how he did that?

As the gain $K$ is varied and the root loci reach A, two of the branches (green and blue) meet at A and there are two roots there, which your lecturer calls $\beta$.

The third root is somewhere on the red locus, which is also real and the root is denoted by $\alpha$.

Thus the characteristic equation of the closed loop system is $(s+\alpha) (s+\beta)^2$.

The second term is then expressed as the standard second order system, which is not used in the rest of the answer.

I don't have access to matlab right now, so plots that can illustrate my thinking will (if needed) follow later.

So what do we know? We know that the closed loop transfer function has 3 poles, 1 real pole and depending on K 2 complex conjugate poles. You now want to find the pole A † for that $\zeta=1$. This means we need to find a pole with no imaginary parts and negative real parts (for a stable system).

In order to get possible complex conjugate poles we need to have the form of $(s+\beta)^2$ There is an explanation which derives (I) from the fact that mostly these functions can be described with ODEs of order $n$ but I'm lacking the understanding to explain this to you so I'll just say this will have to do. I mainly apply these functions rather than deriving them. So bear with me.

Summing up we just let $(s+\alpha)$ be because we don't care for the poles of the left most part of the LHP because those poles always only have a real part as you can see from the root locus. From the knowledge that $\zeta=1$ means no complex poles you can derive A.

And for the sake of completion: $\beta > 0$ or as the lecturer wrote $\beta$ cannot $\in 0 < \beta < 1$ comes from the knowledge that the system shall not be unstable.

† Why did you call A A'? Clearly A in the root locus is the point you are looking for.

3
How do you find “this” Vx in the given circuit?
1
How to find the stability margin of a transfer function?
1
Cascaded PID loop and parallel PID loop
3
Finding stability of open loop system connected to closed loop system
2
What (if any) are the engineering limitations for producing “simulation” exoskeletons
1
Using place command in MATLAB using different state representation
1
Find the system response given the initial condition
1
How to find the smallest change in voltage
0
Limitations on the control effort