I think that some of you know what is rolling resistance. It is force that works in opposite direction to roll and is caused due to deformation of tire. It also affects car wheels. There is one problem with it. I have found 2 equations around:

However, none of them seems to be right one. First one seems to be incomplete, inaccurate, but second one doesn't depend on speed making car shake when being in standstill.
I need to know what is accurate(but still game-compatible, not too heavy) equation for rolling resistance.

Before we dig into practical equations, I'll just say that tires are surprisingly complex in their behavior. There are a variety of equations that try to fit the experimental data reasonably well. Hard to say that any one is right or wrong.

That having been said, the first equation is pretty inconsistent with the everything that I've ever seen. Weight on the wheel should almost certainly be included and rolling resistance rarely approaches 0 at 0 velocity in the literature. Two forms cited by Gillespie [ 1] are:

for low speeds and

over a broader range of speeds. Were F_r, W, V and f_i are rolling resistance force, weight on the tire velocity and empirical constants. Units are lbf, lbf and mph (sorry!).

The second term looks like an expression for increased rolling resistance when steering/slipping. $\alpha$ would be the slip angle of the tire. Something like that would be added to either of the above equation. To give you a sense of the what this looks like, check out this graph. Also for Gillespie: 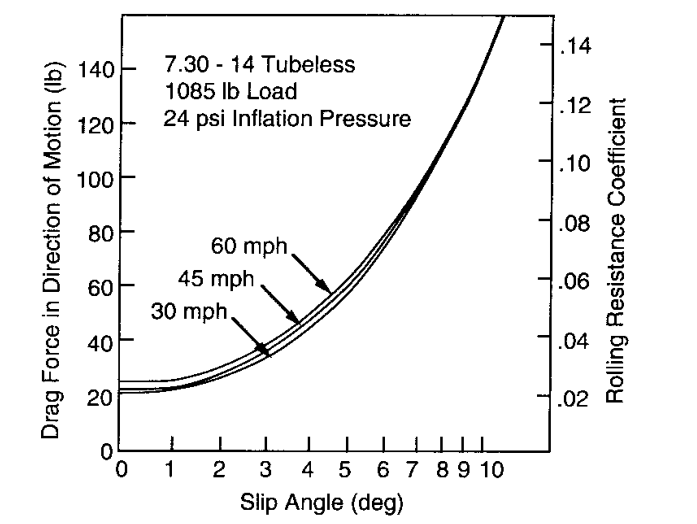 Lastly, with the above equations, you'll probably still have an issue with jittering around $V=0$ in a numerical simulation. Instead of using simply switching direction of force with the sign of velocity ($F_r*sign(V)$), try multiplying the force by $tahn(\beta V)$ instead, to smooth out the transition ($\beta$ is a parameter to control how sharp the transition is).

Not the answer you're looking for? Browse other questions tagged automotive-engineering deformation wheels or ask your own question.

20
Why do cars turn by turning the front wheel?
5
How do I calculate rolling resistance for tire on pavement?
1
How do I model the friction on a rolling pulley wheel, which holds weight, on a horizontal cable?
4
Reason of Using exactly 5 Wheel Studs per Wheel
4
What causes Rolling Resistance?
1
Calculate Rolling Resistance Experimentally
1
What wheel setup on a small, solar powered car, would have the least rolling friction?
2
Effects of rolling resistance on wheel angular and vehicle longitudinal speed