In my mechanics of materials class we are required to be able to solve problems with bolts in shear. Unfortunately our textbook doesn't cover this subject we only had a little bit of information given on slides and I am having trouble finding other resources that expand on this concept.

Here's an example question for context: 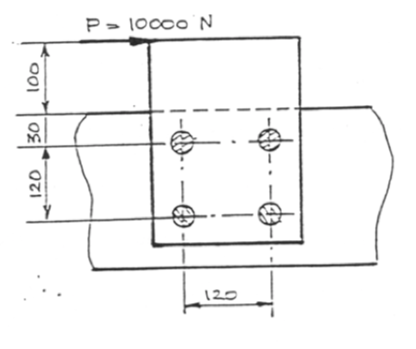 I have no trouble doing these types of problems but I'm curious what happens if the bolts are not all the same diameter.

What I'm guessing is that the torsional shear will change because the centroid and polar moment of inertia will change but the torque stays the same. Is that correct? Is the force in the direct shear component still evenly distributed on the bolts?

In the above example if one bolt has a larger diameter than the others would the direct shear on the bolts still be $\displaystyle\tau_D=\frac{P}{4A}$? (obviously $A$ is now different in the larger bolt) or would the force in the direct shear be proportional to the relative size of the bolts?

Can anyone explain this to me to verify if my line of thinking is correct?

If the bolt diameters vary (rare in civil engineering constructions, we don't want the workers to get bolt sizes mixed up on the tenth floor from ground), then the centroid of the bolt areas will change, hence the value of J (all relative to the centroid). Therefore the torque component of shear will change since the value of J and c (distance from centroid to bolt) will vary. The direct shear component will change as well, since the total direct shear (P) must be shared prorata according to the areas. Do not forget that the eccentricity e must be modified according to the new location of the centroid.

Just as a side note, this is the classical method based on superposition of the two components of an eccentric force into a force applied through the centroid, as well as a moment (torque). It is considered conservative,... too conservative. Kulak has done a good review of this method, as well as the ICR (instantaneous centre of rotation) method, which is considered realistic. However, the ICR method requires iteration to find the centre of rotation, and hence is not suited for a first course. The ICR method is realistic because it takes into account of a certain degree of slipping, and local failures in shear.

If and when you have time, here are some detailed readings: http://www.boltcouncil.org/files/2ndEditionGuide.pdf http://personal.stevens.edu/~shassiot/SteelDesign/AISC-DesignExamples/pdf/RP/CrawfordKulak1968.pdf

This can get quite complex in practice as you also need to consider the fit of the bolts in the holes and the effect of tolerances on exact load distribution and stress concentrations in the plate and the assumptions inherent in the calculations you quote become increasingly doubtful. For example variations in hole size an placement mean that in your example it is entirely possible that one or more bolts could be completely unloaded.

In fact in the sort of situation you are describing it is not really ideal to have the bolts loaded in shear at all. Instead the bolts should be preloaded in tension (eg by tightening to a known torque) and the shear loads are born by friction between the mating surfaces. This is essential in things like pipe flanges where any gapping of the joint would constitute a failure but also tends to give have advantages in other situations as you can a have a well understood and predictable load distribution without very tight tolerances on hole size and placement. This also tend to distribute the load much more evenly throughout the fixing rather than having stress concentrated on the point where the shank of the bolt touches the side of the hole.

There are situations where it is appropriate to load bolts in shear but this tends to be when you are using them as a simple axle or pin etc (this is often seen in castors and shackles). In this case you almost always have only one bolt taking the load and often the bolt hole will be reinforced relative to the plate it is in with some sort of bushing or similar.

Not the answer you're looking for? Browse other questions tagged mechanical-engineering stresses bolting or ask your own question.

10
What is the difference between the Polar Moment of Inertia, $ I_P $ and the torsional constant, $ J_T $ of a cross section?
2
Force required to move object on wheels
1
Shear Stress Formula
0
How to model a driven wheel with no slip
1
Determine Bolt dia from Shear stress and force
1
Dimensioning of beam pressed by screw in assembly
4
Torsion and Bending stress calculated from deflection
0
Distribution of Forces into 3D Bolt Group
0
How do I interpret this DC motor datasheet?