I live in a new (~10 years old) 2 story duplex home in the Eastern United States.

We have a completely interior bathroom on the first floor. It is between 2 other (exterior) rooms, the garage, and the firewall. It has a shower (plastic covering, not tile) but no tub.

We also have an unfinished basement. The foundation is concrete slab with CMU walls, which extend about 18 inches above ground level. There is a small (I think it's called a "port") window in one corner. At the opposite corner is a steel door that opens to a poured concrete stairwell topped with Bilco doors. It's an open space, I'd estimate a little under 1500ft2. We use about 2/3 of the space for general storage (decorations, unused furniture, food, the usual stuff) and 1/3 for my woodshop (hand tools, power tools, lumber, etc).

According to http://www.tornadohistoryproject.com, my County has seen 31 recorded tornadoes since 1950, with the following breakdown by scale:

(the Tornado History Project gets it's data directly from NOAA but uses the term "Fujita Scale" consistently - I don't know whether that means all their data after 2007 is actually scaled on EF or not - they don't seem to specify).

The general advice is always "get to a basement or an internal room on the lowest floor."

This makes sense. Roofs and exterior walls are for obvious reasons the first surfaces to be damaged and destroyed. Upper floors are more susceptible to structural damage. Direct wind and debris from tornadoes also is much less likely to extend below ground level, making basements in general a good place to be. In a lot of cases (as in mine) the basement is used as storage for food and/or provisions - helpful in the event of being trapped.

It's also clear why fully interior rooms are an acceptable alternative - they put more structure between you and the storm. Since wind-induced structural failures happen from the outside in, they're also the rooms most likely to be left standing.

The Wikipedia page on Tornado Intensity has example pictures of damage. 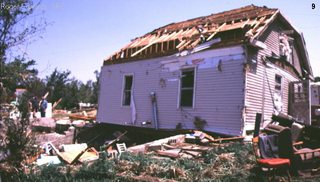 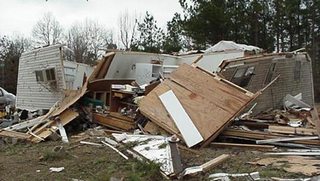 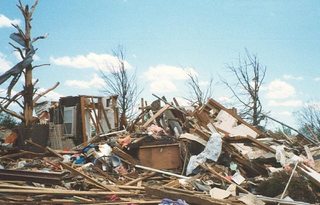 Just looking at those pictures, I wouldn't want to be above ground if the basement is an option. You don't want to make a decision based on how strong you think the tornado is. Just go to the basement if it is possible.

It isn't likely that the wind will be strong enough to throw your tools around in the basement. And if it is, I certainly wouldn't want to be above ground.

Not the answer you're looking for? Browse other questions tagged structural-engineering safety or ask your own question.