How can one make graphene cables?

You might see in this short, 2-minute video that billionaire Manoj Bhargava talks about creating cables from graphene to conduct heat from the underground sections of the earth to the surface.

But as per the properties of graphene, it is only a good conductor if the number of layers is one or very few. Once you start stacking it up, it is just normal graphite and it's conductivity gets reduced.

What's proposed in the video is a cable made from graphene. My question is how is it possible to make a graphene rope without stacking up graphene layers (and thus ending up with graphite) or without converting it into nanotubes?

I would also like to know why stacking up graphene reduces it's conductivity? Why don't the layers behave independent of each other?

I'm sure the methods they are using and advertising in their video are extensively protected by patents that can be searched here: "Graphene Production" patent search

This phys.org article explains that the crystals must be aligned. "When two crystals are neatly lined up, heat transfer occurs just as predicted by theory. But if the two crystals have mis-aligned edges, the heat transfer is 10 times less."

In the past I have cut ice with low grade pyrolytic carbon that I originally procured for a diamagnetic demonstration. The very high conductivity is quickly evident and it works just like it does in this youtube video. 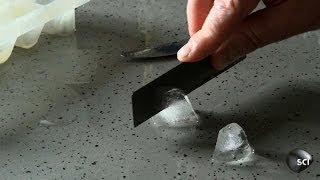 As far as economic feasibility; there would have to be some major reductions in price and increases in conductivity to make it more economically advantageous than current geothermal fluid heat transfer systems; let alone other forms of power production.

Not the answer you're looking for? Browse other questions tagged thermal-conduction or ask your own question.

0
How to calculate temperature rise on AC induction motor in an evaporative cooler centrifugal blower?
2
How can I determine the thermal conductivity of an open container?
2
How thick do I need to make the insulation in my homemade furnace?
4
Use two passive CPU coolers on one single CPU?
1
How cold for lack of heat?
1
How to calculate the volume of air required to keep electrical box cool?
0
How to heat up a swimming pool with the sun
2
How can I trust a K-type thermocouple purchased from a no-name company?
1
How do I calculate final equilibrium temperature of a pot of water on a stovetop vs. after I add food to it?