What is the process called for up-sizing a proof-of-concept prototype to full-scale?

What is the process called when you upscale your proof of concept to a full size prototype?

That is if the term exists or if it is still prototyping as mentioned in the comments.

In my experience (your mileage may vary) these are the sorts of processes and terms used in product development:

The road from breadboard to prototype to finished product in the context of product is called NPI or New Product Introduction - this encompasses the entire development path from idea to release.

So, to try and answer your question, in my experience the process that gets you from breadboard to prototype is a mix of debugging and preliminary EVT - you take your 'something', test it against whatever requirements you have (and whatever requirements your breadboard is capable of withstanding), adjust your hardware/design/requirements accordingly, generate and release your product documentation (BOM, schematic, mechanical drawings, firmware, etc.) and built prototypes.

Regardless of what you call it, you should at all times remain aware of where that prototype lies in your process. My favorite question for students during a design process involving prototyping is "why are you building this prototype?". Obviously, you're building a prototype because you're asking it a question. If you knew the answer to the question you're trying to address with the prototype, then there wouldn't be a need to build it.

If I may wax a bit philosophical, going from small size to large size sometimes shows an idea may not scale well. My absolute favorite example comes from the story of Diognetus in Vitruvius' Ten Books on Architecture. Diognetus was fired from his retainer for the city of Rhodes, because an upstart proposed a scale model for the purpose of defense against siege engines, nabbing them by crane. When attacked by the Helepolis, the siege engine to end all siege engines, the "breaker of cities", he couldn't build it, because it didn't scale well.

They managed to rehire Diognetus, at his own price! (http://lexundria.com/vitr/10.16/gw)

He at first refused to listen to their entreaties; but when afterwards the comely virgins and youths, accompanied by the priests, came to solicit his aid, he consented, on condition that if he succeeded in taking the machine, it should be his own property. This being agreed to, he ordered a hole to be made in that part of the wall opposite to the machine, and gave general as well as particular notices to the inhabitants, to throw on the other side of the hole, through channels made for the purpose, all the water, filth, and mud, that could be procured. These being, during the night, discharged through the hole in great abundance, on the following day, when the helepolis was advanced towards the wall, it sunk in the quagmire thus created: and Demetrius, finding himself overreached by the sagacity of Diognetus, drew off his army. 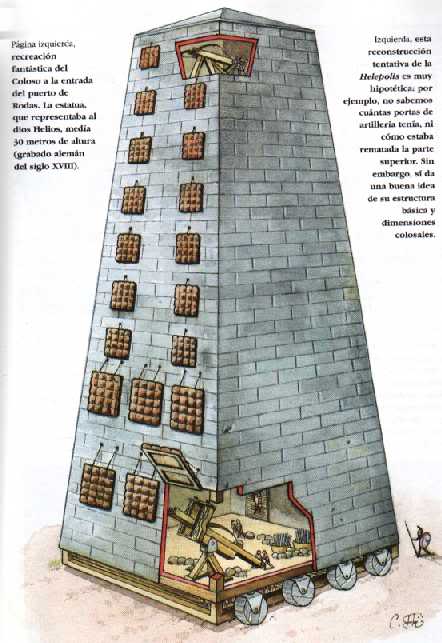 The moral of the story is hold out for your price!