How can I determine how many cycles to average for when taking a measurement using Lock-in Amp if I know sensor spectral noise density?

I am taking a phase sensitive measurement of an AC magnetic field using an SR830 Lock-In Amplifier and a magnetic sensor. I know I have to average over a number of measurement cycles to get an accurate reading. The amount of time I should average is determined by the measurement frequency, the time constant on the lock-in amplifier, the filter slope, the noise measured by the sensor and the required accuracy. See the following diagram I have pulled out of the SR830 manual (T = time constant, ENBW (Equiv. noise bandwidth). Wait time = min. time that should be allowed before averaging starts): 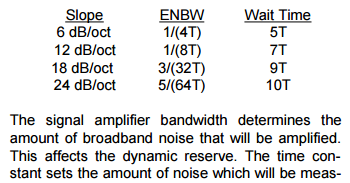 I have measured the spectral noise density of my sensor using the lock-in too: 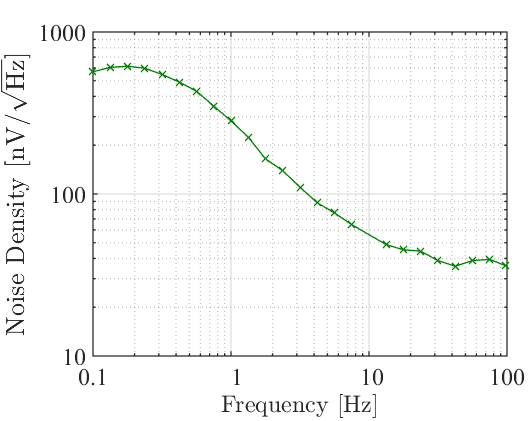 Now say I want to take a measurement that would have an expected output of 1μV at 10~Hz with an accuracy of 1%. How many cycles/how long would I have to average? Could you help to explain how you figured this out?

I will expand if the question is unclear.

I'll start by telling you the complete way to calculate the noise in the measurement, and then I'll tell you how to make a quicker estimate.

Lock-in Amplifiers: First of all, it is helpful to explain how a lock-in amplifier works. It works by taking the input signal and demodulating it against the internal (or externally supplied) sine wave reference. If your input signal is $V_i = A_i\cos(\omega_i t+\phi)$ and the internal reference is $V_r=\cos(\omega_r t)$, then the demodulated signal is given by $$ \begin{align} V_d &= \cos(\omega_r t)\ A_i\cos(\omega_i t + \phi) \\ &= \frac{A_i}{2}\left[\cos((\omega_i-\omega_r)t - \phi) + \cos((\omega_i + \omega_r)t + \phi) \right] \end{align} $$ Usually $\omega_i\approx\omega_r$ because the lock-in's frequency reference is also used to drive the system being measured. In this case the first term is near DC while the second term has twice the frequency of the driving signal. After the demodulation, the lock-in amplifier low-pass filters the signal to get rid of the second term leaving only $$ V_d=\frac{A_i}{2}\cos((\omega_i-\omega_r)t - \phi). $$ The bandwidth of this low pass filter is what sets the frequencies you are able to see as well as the noise in the measurement.

Full Noise Calculation: The RMS noise is usually calculated from the PSD (PSD = ASD$^2$) with an extension of Parsaval's theorem which says that the RMS variance of a time domain signal is given by $$ \sigma^2=\int_0^\infty PSD(f)df $$ In the case of a lock-in amplifier you have to take the low-pass filter into account by multiplying by the shifted, double sided filter. Once you have the variance, the standard deviation is just the square root of the variance, and the noise in your measurement after averaging over many cycles is given by the standard error of the mean $$ SE = \frac{\sigma}{\sqrt{N}} $$ where $N$ is the number of cycles that you average.

In the absence of an analytic answer (which I'm sure exists somewhere), you can try running some post-test analyisis. Take a very long sample, then calculate means and standard deviations when chopping the sample into a collection of subsamples. By changing the subsample length, you can see at what sample length the variance of the calculated mean and the variance of the calculated standard deviation are small enough for your desired results.

Not the answer you're looking for? Browse other questions tagged mechanical-engineering electrical-engineering sensors measurements experimental-physics or ask your own question.

12
Low cost, moderately accurate water depth measurement
2
Low-tech ways of assessing relative strength of a material (yield point)
1
Which type of sensors to analyze polluting gas from vehicle emissions
0
How can I confirm nL Volume Measurement for Pump and Sensor Calibration
2
What sensors/methods can be used from the roadside to determine if a truck is loaded or empty - without weighing it?
4
Is there an industry consensus standard for storing sensor data?
2
Non-observable effect of low-pass filter on the Transfer function (of Vibration measured with Laser scanner)