How can large bridges be made resistant to earthquakes?

How can large bridges, with spans on the order of 1 km, be made resistant to earthquakes?

I'm no expert on quakes, but there are at least two kinds of shaking: lateral and vertical. The vertical shaking in particular really worries me. I don't know how any kind of shock absorbtion can be built into a massive, tall structure like a building or bridge tower.

(I was originally going to ask about suspension bridges, but then I read that suspension bridges are not great for heavy trains. The background of this question lies in my exploring the idea of a Bering Bridge (from Alaska to Siberia, crossing the Bering Strait), which would be primarily a train bridge. And it would need to handle freight trains, the heaviest of all sometimes exceeding 100 tons per car.)

So I will just ask the question about large bridges in general.

I think the largest quake in Alaska was a 9.4 Richter Scale in 1964, hitting Fairbanks. (I don't know how to convert to Moment-Magnitude scale). Is it possible to build large bridges that won't collapse from that? Ideally, we want the bridge to not collapse during a quake even if it's under full load.

P.S. I know it's not cost effective to build such a bridge. For one thing, far east Siberia has no rail network (or much civilization in general). There was a tunnel project proposed which I think they said was cheaper than a bridge, which I couldn't understand because digging through tough rock seems a lot harder than driving a pile in 50-m deep water. The tunnel project was suspended IIRC, no surprise.

Anyway, I'm just exploring if such a bridge is technically possible and can be quake-resistant. If you need something closer to reality, I suppose we can look at the Golden Gate Bridge in San Francisco. I saw here they were working to make it safe in quakes up to 8.3, but it didn't go into the details. And keep in mind the Golden Gate Bridge does not handle freight trains.

Anyway, is it possible to quake-proof or seriously resist quakes in large bridges loaded with a freight train? The bridge would not necessarily have to remain completely undamaged. I just don't want it to snap and drop the train in the ocean.

You can never make something earthquake proof, but there are many things that can be done to resist earthquakes.

There are long-span bridges built in earthquake zones. For example, the Akashi Kaikyo bridge in Japan is currently the longest span bridge in the world and is in a severe seismic zone. It is designed to withstand a magnitude 8.5 earthquake. In fact it was subjected to a magnitude 7.2 earthquake during construction. galtor mentioned in another answer the San Francisco Bay bridge which has been retrofitted to improve it's seismic resistance. So designing bridges to resist strong earthquakes is certainly possible and has been done.

What can be done to improve the earthquake resistance of a bridge?

Tuned mass dampers are used in tall buildings as well as in bridges to counteract the movement due to earthquakes as well as wind and other lateral loads. The Akashi Kaikyo bridge uses TMDs in the suspension towers for example. 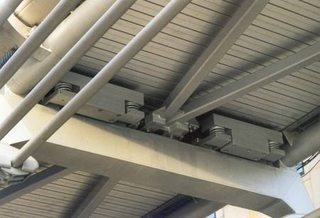 Base isolation is one of the most common techniques used to resist earthquake movement. These are devices which essentially separate the horizontal movement of the foundation from the rest of the structure by using some form of sliding bearings. If designed properly this can drastically reduce earthquake damage. 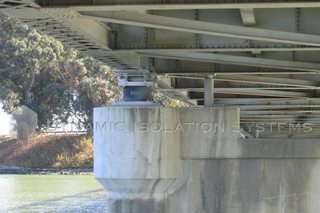 Seismic Dampers are also common. These are a range of devices which act to remove seismic energy from the structure similar to how shock absorbers on a car remove the vibration energy of the car going over a rough road. 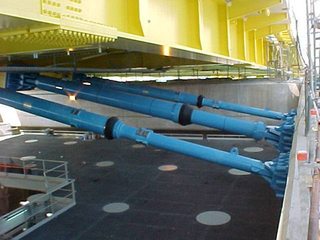 These technologies are well understood and are frequently used in bridges and buildings. There are more experimental techniques which are also possible such as: rocking isolation, or active damping systems (computer controlled dampers).

If desired these devices can also be used in combination in order to further enhance the earthquake response.

In standard seismic design practice a structure is designed to accommodate some damage. This damage is, wherever possible, concentrated in elements which are more easily replaced (beams and braces), and which will not result in a disproportionate collapse if damaged.

It is certainly technically feasible to design large bridges to resist earthquake loading. Especially if there were no financial constraints.

You may find this useful reading: How Earthquake-resistant Buildings Work. The techniques used on buildings can also be applied to bridges.

Actually very long bridges (and super-tall buildings) often have less issues with earthquakes than their smaller brethren. This is due to them generally being much more flexible and therefore having lower fundamental periods which makes them less susceptible to resonance in their fundamental modes. The fundamental modes are the swaying patterns that include the majority of the structural mass. An extreme simplification would be that the main structure sways so slowly that it barely notices the quick movements of an earthquake. A bit like a large ship in small waves.

In general "mid-size"-structures, with fundamental frequencies between say 1Hz and 10Hz, are usually much more harshly affected as there is a much larger risk of fundamental resonance leading to very large load effects. For very large and slender structures the wind engineering is generally a bigger challenge than the earthquake engineering.

However the piers and abutments and their connections to the main bridge deck are critical as they usually are much stiffer than the bridge as a whole. And given the amount invested and the potentially horrific consequences of a failure of a large structure a lot of effort will of course be put into performing and checking (and triple checking) the earthquake engineering of every part of the structure. I'm just pointing out that the problems aren't simply proportional to scale, larger structures aren't necessarily harder to "earthquake-proof" than smaller ones.

I am going to center in one of the most famous bridges of these conditions last years: San Francisco Bay Bridge.

This bridge is not planned for trains, and so they tested with huge hydraulic jacks (see here). This bridge is designed not to collapse during an earthquake, but just to suffer minor breakdowns that could be easily repaired.

When earthquakes, one of the crucial points that was found is that the tower of the bridge must resist and not fall. And this is a key point in the current bridge, as it has individual and expensive basement and the main tower is divided in four pieces not to collapse completely (see here). The bridge could be robust and indestructible, but aesthetically it would be much uglier and probably more expensive for the increase of concrete and other materials.

Unlike more conventional suspension bridges, in which parallel cables are slung over towers and anchored at both ends in rock or concrete, San Francisco Oakland Bay bridge has only a single tower and a single cable that is anchored to the road deck itself, looping from the eastern end to the western end and back again.

It makes no sense in defending Roman bridges among other. Romans just tested designs empirically till they realized that a particular model resisted, but the bridge engineering was not too big those times.

Not the answer you're looking for? Browse other questions tagged structural-engineering bridges seismic or ask your own question.

5
How many units of HB are used for steel bridges?
11
How accurately are moveable span bridges balanced?
10
Can the structural integrity of bridges be measured in real-time for safety?
4
How do protective coatings affect the lifetime of bridges?
1
How to determine how large each terrace should be on a multi-level retaining wall?
2
Can a horizontal foundation safeguard against earthquakes?
2
Can a crisscrossed metallic skeleton resist earthquakes for buildings?
0
Why are/were sewers made large enough for somebody to walk down in there?
0
how can i find Spectral Acceleration (Sa(T1; 5%))?