First of all, I'm interested in train track only, not the rolling stock.

How are tracks built to cope with really cold weather? An example might be some place in Canada or Siberia. Ice would accumulate all the time, changing the shape of the rail.

How does the ballast or foundation cope with the thawing tundra in summer? What about the really nasty stuff like blizzards dumping snow over the track, or sleet, or freezing rain?

Snow can be a problem for running trains, but it really doesn't affect the rail/ballast. Just like on highways, the snow needs to be moved away, but it doesn't have many other effects.

Trains are used to plow through small amounts (Wikipedia): 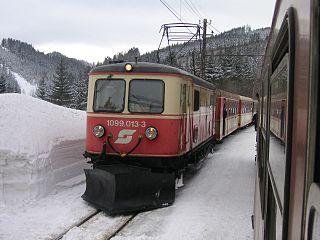 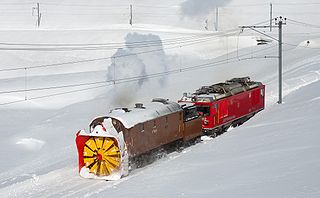 Ice could cause more of an issue due to adding thickness to the rails. This is mostly handled by making the trains travel slower. The weight of the wheels on the rail is enough to crush through any ice that has accumulated, i.e. trains are really heavy. As long as the train doesn't move too fast, it isn't in danger of derailing.

Switches need to move in order to operate. Ice and snow accumulations can cause issues if they keep the components from moving. It is for this reason that most switches have switch heaters installed. These are gas powered heaters that blow hot air in the appropriate locations to melt any snow or ice.

Like mentioned above, the rails aren't really affected by ice or snow. They are just chunks of metal. The biggest issue that rails face is the cold.

Rails are restrained by rail anchors from expanding and contracting due to temperature changes. If the weather gets cold enough, the rail won't be able to contract enough and the stress will be so great that the rail will break. This isn't as much of an issue as you might think though. Many sections of railroad use the individual rails to transmit signal controls. They are set up to failsafe, so that a broken rail is the same as a broken connection. This will show a stop signal.

Ties are hunks of wood. They aren't really affected.

As you mentioned, freeze and thaw will cause issues due to volume changes. These effects can be foreseen and dealt with.

The ballast section should be designed to drain water. If there is no water, there is less chance of volume changes. The same can be said for the subgrade. Drainage is key.

Apart from a good design, freezing and thawing happens every year. It is very predictable. During the time periods where these effects are likely to cause issues, the track can be inspected regularly to keep it in geometric tolerance.

Not the answer you're looking for? Browse other questions tagged materials temperature rail transportation or ask your own question.

4
How do gapless rails deal with thermal expansion?

7
How are train crossing signals and highway traffic signals coordinated?
17
How many train passes can railway tracks endure?
3
How to notate the position of a train?
3
Why do all high-speed trains run on electric track (as opposed to normal track with diesel-electric trains)?
3
How can traffic signal controllers handle multiple conflicting preemption requests of equal priority without dropping one?
1
How can I describe cold work and atomic structure?
0
Resources for strength calculation for an outside aluminium loft ladder and what about it becoming brittle in cold weather?