Are there any materials known to be sound-insulating but thermally-conductive?

Are there any materials known to be sound-insulating as well as thermally-conductive?

Cost is not an overriding concern, but preferably costing "reasonable amounts" and much less than national defense spending levels.

This is a thought experiment that I'm pondering regarding the idea of a computer case which conducts heat while isolating or dampening all of the sound inside.

There's multiple holes in the idea when fully formed regarding financially reasonable, allowing air-flow, etc, but to keep this question narrow I want to just dismiss all of those concerns for the thought experiment.

I recognize conducting one type of energy while insulating against another is not a straight-forward thing. The closest material that comes to mind is water, but that's not completely accurate because it does conduct kinetic energy (i.e. hydraulics). It is better described as acting as a sort of low-pass filter.

So if no materials come to mind, I'd be interested in hearing of something that could filter sound very effectively while conducting heat as well.

I'd like to put the qualifier that the material is a solid, but I'd be interested really in any material with these properties just because I believe (perhaps wrongly?) that there are likely a very small number of them. Again, don't think in terms of the goal concept I mentioned regarding a computer case, this is just one step towards that thought experiment (which is likely not reasonable, or else products would be on the market right now that provide such).

I can think of a few possible ways to approach this.

Probably the first thing to look at is the design of the case itself. They generally tend to be made up of thin, flat panels riveted to a frame. In this sort of situation you can get a lot of benefit from the use of a relatively small amount of sound deadening material. This approach is widely used on automotive body panels and has the advantage that a fairly small strip can reduce the ability of the panel to transmit sound significantly and can be as simple as bitumen impregnated felt.

Also relatively thin films or coatings can have a significant effect on acoustic response without providing much thermal insulation.

Similarly there is probably a lot of potential in increasing the damping of the whole structure of the case, for example by using rubber gaskets or spacers at metal to metal joints.

In more general terms it is often useful to think not so much in terms of sound insulation as a general material property but to look at the way that the structure as a whole responds to the vibration frequencies that it is subject to and 'tune' it to respond in the way that you want by adjusting its mass, stiffness and damping so that its resonant frequency is as far away as possible from the excitation frequency.

So overall I would advise looking at the dynamic behaviour of the case as a whole rather than just a specific material.

Having said that there are a few materials which are worth considering. Aluminium and copper (especially in high purity) have excellent thermal conductivity and are fairly 'soggy' in their mechanical properties, also cast iron has particularly good vibration damping characteristics as well as reasonable thermal conductivity (and I would love to see a cast iron PC case).

It may also be worth considering composites. Carbon fibre has the potential for good thermal conductivity and it may be worth investigating aluminium filled resins and these may give a bit more flexibility in tuning the structure of teh case to get the best acoustic response.

Another possible approach might be to sandwich a gel or powder between two sheets of aluminium or copper. There have also been experiments in completely submerging a computer system in oil which would provide both acoustic damping and convective cooling.

An afterthought: You could also use a vinyl/carbon-fiber type composite (maybe filled with alumina for enhanced thermal conductivity) to make a somewhat flexible (albeit a bit pricey) panel for constructing your computer box. The panel flexibility should work well for damping many of the vibrations & absorbing the energy (esp. by not 'buzzing' as much where panels meet, or where noisy fans/HDDs are mounted to panels).

Since nearly all the sound (aside from speakers themselves) originates in cooling fans, it's going to be really tough to block sound while allowing exhaust airflow. You'll need a different, expensive, cooling system.

Probably the next noisiest is the hard drive, which if well heat-sunk could be covered locally with sound-absorbing material (or switch to all-SSD at some expense).

In sum: you are far better off eliminating sources of sound than trying after the fact to ameliorate the problem.

If the hard disk drive was replaced by with a solid state drive and the heat sink for the CPU chip was made bigger and externalized it would be possible to have a silent computer which cooled directly to the atmosphere or could be cooled by other means.

If one on the larger panels of the computer case acted as a heat sink it could be connected to the CPU chip via thermal conductors and the heat produced by the CPU chip drawn away and radiated to the atmosphere or cooled by other means, such as a water jacket. This would eliminate the need for noisy cooling fans.

While not a singular material, and a very crude approximation of the concept, would an approach like this not allow more heat then sound to pass through? 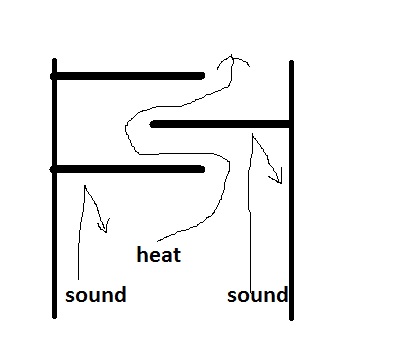 Not the answer you're looking for? Browse other questions tagged materials thermal-conduction sound-isolation or ask your own question.

6
Are there materials that are good at transmitting sound but thermally insulating?