Why does the orientation of a floor joist affect its strength?

It seems intuitive to me based on experience, but I can't actually explain why we orient floor joists the way we do even though it seems obvious that will lead to a stronger floor. I imagine whatever the reason is, it also explains why I-beams have such a thin webbing between the two sides.

Get a gallon of milk, and shake it up and down by moving your wrist only.

Then, hold your forearm out and shake it by moving your elbow only.

Then, hold your entire arm out and shake it by moving your shoulder only.

The mass didn't change, but the force it took to move it goes up (a lot!) because it is farther from you. This phenomenon, when referring to rotating a mass (as in rotating about your wrist, elbow, or shoulder) is called the "moment of inertia" or, specifically, the "mass moment of inertia."

Similarly, it becomes "harder" to apply the same force to anything the farther from the force origin you get. In instances other than mass specifically, as in I-beams or wood beams, the property of interest is called the "area moment of inertia" or, to add to the confusion, also the "second moment of area."

Essentially, the more material (cross-sectional area) you can put away from the force, the less of an impact that force has on the material. It's very similar to how your shoulder has to work so hard to shake the milk.

I made a picture (not animated, sorry) that shows a traversed arc, and how it remains constant if the traversed angle decreases linearly with increasing distance.

The point of this graphic is to demonstrate strain. If your shoulder did the same work as your wrist, then the gallon of milk would go up and down the same linear distance, but it would not traverse the same angle.

Similarly, if you attempt to bend something, as in a floor joist, the change in length (strain) in the material may be the same, but if you can put the material farther from the bend axis then that strain corresponds to a smaller deflection.

Let's try a numeric example. Consider a very short, very wide rectangular beam whose cross-sectional width is 10m and cross-sectional height is 0.1m. This beam is representative of a slice, but I'm using it for this example to hopefully drive the point across.

The area moment of inertia of the beam about its x-axis ($I_x$) is given by:

So, when the distance is doubled, the area moment of inertia approximately quadruples. Now, consider the bending stress:

When the beam is moved out to 2m, the moment of inertia became approximately 4, but now the distance $y$ to get to that beam is $2$, so the bending stress becomes approximately $\sigma = \frac{M(2)}{4}$, or $\frac{1}{2}M$. Putting the beam out at twice the distance caused the bending stress to halve. Strain is linearly related to stress by Young's modulus (assuming elastic deformation), so this means that the strain, or elongation, is also halved by moving the beam twice as far.

Again, this was an illustrative example where I picked the beam size to drive the area moment of inertia of the beam itself to a negligible value such that the parallel axis theorem was the dominating factor. This was done to reinforce the concept that material placed farther from the bending axis results in less stress (and thus less deformation/bending) at the edge of the material.

The web or wide part of the 2x10 is the part that resists bending. A wider 2x? or web will resist bending under heavier loads. The force being transferred through the web means that more material needs to stretch or compress for it to fail.

Imagine bending a 2x10 in plane with the 10 inch part. The bottom part will be stretching along the length of the joist and the top will be compressing. Having more material to resist those forces makes a stronger joist (or I-beam). Using a 2x10 with the web face-up would have very little material resisting the stretching or compressing which would lead to failure much more easily.

In the context of engineering calculations this is down to a property called 'second moment of area', the way that this is defined is a bit obtuse but is describing something which is reasonably intuitive.

If you consider a joist, supported at both ends with a weight at a point in the middle it will (obviously) bend. This bending force is trying to stretch the bottom edge and compress the top edge so logically there is a line along the middle where it is neither bending nor compressing and similarly the greatest stress is at the top and bottom edge, decreasing towards the middle.

If you do the full analysis it turns out that the stiffness of the beam is directly proportional to its width but also to the cube of it's depth.

So, in terms of bending the distance between centreline and edge of a beam (in the direction of load) is much more important than just its cross-sectional area.

The first thing to take into account is how stress builds in a material. This is rather intuitive and something we all know, but takes a bit of thinking to back it up mathematically. It's quite easy to get sucked into the world of 'Second moment of area' which is incredibly important for calculations, but not strictly necessary for understanding how it works (I hear screams of "heresy"..). 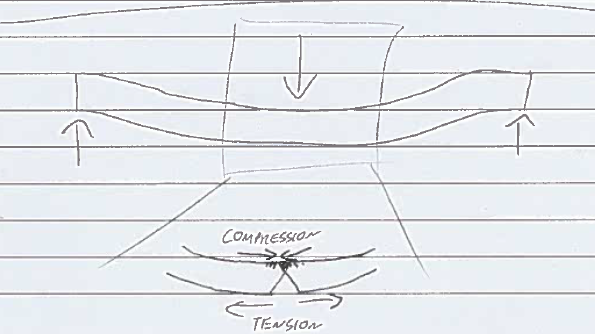 So the implications of this is that at some point between the bottom and top fibres, there is a point where there is no stress (where it transitions from tension to compression). The maximum bending moment (engineer talk, not strictly important for understanding!) that a beam can take is limited by the compressive or tensile strength of a beam, and so working backwards we can work out the difference between a beam that is standing upright and one lying flat.

I've done a quick hand calculation with a few assumptions (for simplicity I've assumed the beam will fail in compression and has a compressive strength of 10N/mm^2 and changed the beam from 2"x10" to 20mm x 100mm). Starting with this, you can work out the 'area' of the stress triangle. You then multiply this by the area of the beam that this stress triangle occurs over. 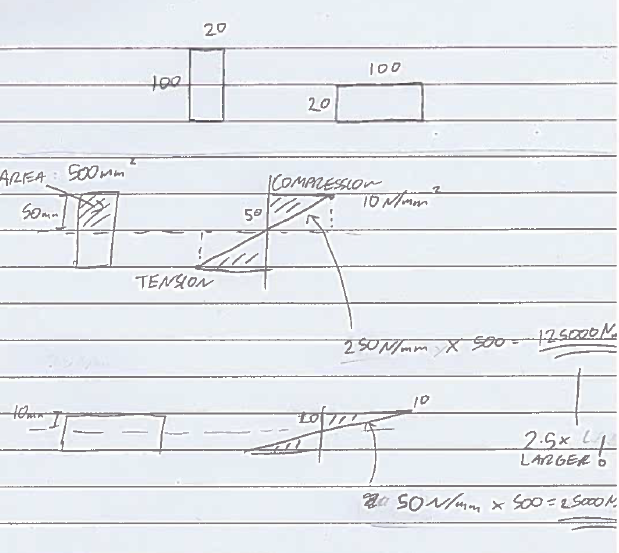 As you can see, the 'taller' of the two beams has a larger stress triangle and thus can resist more bending! This is because more of the beam is located further away from the neutral axis (the point where the beam is neither in compression or tension)! Basically if you were to slowly increase the load, the top fibre of the taller beam would take longer to reach the killer 10N/mm^2 limit that I've given it.

I hope this is clear and simple, it's a little irritating to explain what is a relatively simple concept because there's so much ground to cover.

EDIT: I plan on re doing those sketches/calcs soon, hopefully with some colour. I quickly drew them up at work so didn't put much effort into them!

All structural materials collapse when they suffer excessive deformations and stresses. If you stretch an elastic too far, it'll snap.

Joists are considered beam elements. This means that the primary internal force they need to withstand is bending moment. This bending moment is resisted by a force couple within the joist. The moment causes a rotation of the joist: the top of the joist will be compressed and the bottom will be stretched. This means that the force couple will be composed of the total compressive force on the top half of the joist and the total tensile force on the bottom half (which must be equal under simple bending).

Now, the moment due to a force couple is equal to the product of one of the forces and the distance between them. So, for a joist placed in the strong ("tall") as opposed to the weak ("wide") configuration, the distance will be greater, meaning that the requisite forces to withstand the bending moment will be reduced. Since, at the end of the day, what causes the element to collapse is excessive stresses, you want to minimize the total internal compressive/tensile forces (and therefore stresses) and therefore always put elements in their "strong" configuration.

A beam reacts to bending moment by actually bending a bit in the direction of moment. This bending creates strain in cross section of the beam, tension at lower face, compression at top face. Strain is directly proportional to stress.

Let's for simplicity assume we have bend a beam that has 1 cm2 of material on top and bottom and a web that is 10 cm wide and the max stress this material is capable of resisting is 1 kg/cm2.

If we widen the beam so that the web is 20 cm wide but same amount of material the new beam again has 1 cm2 material on top and 1 cm2 material on the bottom. But this beam can handle 1 kg x 20 cm = 20 kgcm momentum. Turning the joist upside-up will effectively increase its web width!

Why do we orient floor joists in with the longest side vertically? as in the shape of the letter "I" ?

AS mentioned in other posts, the name of the theory is "mass moment of inertia" of which there are whole textbooks written to explain.

Try to bend a plastic ruler different ways. There is one way which will be very difficult. This is explained by moment of inertia!

The reason why I beams are so slim in the middle is that they are able to retain their strength in this orientation, but to save on weight, they are minimal in design (because the weight of the beam also adds to the forces that need to be calculated) So why would you make the beam any heavier than it needs to be if it is just as strong without the extra weight?

20
How does width and thickness affect the stiffness of steel plate?

13
How does pressure treatment affect the mechanical properties of lumber?
3
Is it acceptable, with reinforcement, to notch a floor joist more than 1/6 of the depth?
6
How does the location of a mass affect its dampening performance?
4
What is the correct term for long cuts in a floor joist?
1
Does a joist have to lay "thin side" down?
14
Why does column buckling occur when the load is parallel to the column?
0
Does pressurization speed affect the tensile stress in the vessel wall
0
Does a change in specimen dimension affect the measured yield strength and tensile strength?
1
Why does the IRC think ceiling joists are weaker than floor joists?