How does the S-N curve (or Wöhler curve) of a material change with frequency?

How a Material fatigues can be characterized by a Wöhler curve where each datapoint corresponds to a failure with the stress on the y-Axis and the number of cycles on the x-axis. An example is the following Wöhler curve: 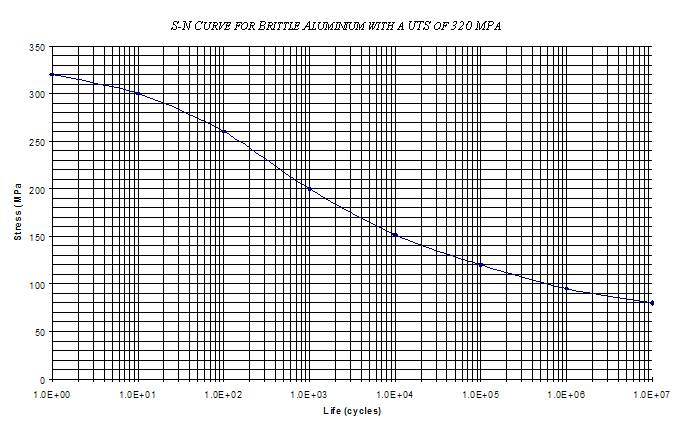 How does this curve change with the frequency with which a cycle count is reached?

If, for any reason, the fatigue process becomes time-dependent, then it also becomes frequency-dependent. Under normal conditions, fatigue failure is independent of frequency. But when corrosion or high temperatures, or both, are encountered, the cyclic rate becomes important. The slower the frequency and the higher the temperature, the higher the crack propagation rate and the shorter the life at a given stress level (1)

This quote is taken from Mechanical Engineering Design, 7th Ed. in reference to metallic parts. Please note - metallic fatigue stresses are taken at high cycle times. The standard R.R. Moore rotational testing machine has capacities up to 10,000 rpm, and thus the heat generated from fast cycling is usually already present in the sample data. Instead the quote states time dependency for fatigue, and a failure of the Wöhler curve to recognize low frequency crack propagation.

A different model is used for low-frequency, high stress loading. (So severe that plastic deformation / crack propogation begins almost immediately) This method, the Manson-Coffin Relationship, attempts to find the remaining cycles left after a crack has begun. If $\Delta \epsilon$ is the strain from loading, $\sigma^{'}_F$ is the true stress for first fracture, $\epsilon^{'}_F$ is the true strain for first fracture, then the estimated reversals (half-cycles) $(N)$ after first fracture can be predicted for all frequencies as:

In summary, while internal heat generation may very well be a key at high cycles speeds for plastics, metallic testing is taken at high frequencies already and the Wöhler curve actually presents problems at low frequencies, which is better covered by the Manson-Coffin model. 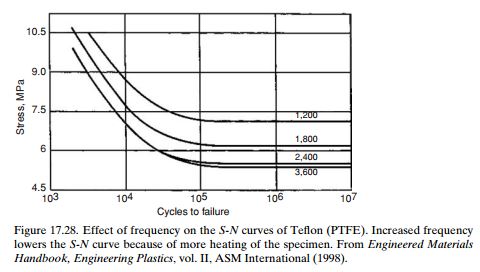 Not the answer you're looking for? Browse other questions tagged mechanical-engineering structural-engineering materials metallurgy fatigue or ask your own question.

12
Is steel relaxation plastic?
3
Why is the Poisson's ratio for isotropic 1/4 and the maximum value 1/2 (when there is no net volume change)?
5
Do all ductile materials experience necking before fracture?
5
How does infill material affects the capacity of a tubular section with H-section inside?
0
Calculating Creep
3
Do I use alternating, mean or max/min stresses for Miner's rule?
1
Stress Tensor decomposition into Compression & Tensile forces
0
What are equations related to the compaction of composite metal powders?
2
Does the volume change under the tensile or compressive stress?