How monolitic is concrete when falsework is being crafted for parts of future structure only?

So the pylon in not really a single piece of concrete, it a combination of pieces seamlessly united together because the concrete surface of the earlier part is kept clean until falsework is moved up and so new portion of concrete just sticks to it pretty well.

How "monolitic" is such monolitic concrete? How much does it differ from concrete put into falsework size of the entire structure?

In a continuous structure such as a beam or a column (under the expected loads for such elements), the structure is effectively indistinguishable from a truly monolithic one.

This has to do with how the elements are poured, with joints perpendicular (or at least not parallel) to the load direction. Columns are poured so that the joints are horizontal, while the load is primarily vertical. Whatever horizontal loads there may be (due to wind, for example) are usually relevant for bending. But in bending the column suffers tension, which the protruding rebar with sufficient anchorage length in both the new and old concrete absorbs, and compression, which is perfectly transferred from one concrete surface to another since the joint is perpendicular to the force.

Very long beams requiring multiple pours are set with joints which are inclined at shallow angles in order to avoid creating a preferential plane for shear forces. One shouldn't make the joints horizontal, though, since that risks the different segments (more like layers) working independently instead of as a monolithic whole. Therefore, the same reasoning given above for the column applies to the beam as well: it suffers mostly bending, where the resultant tension is absorbed by the appropriately-anchored rebar and the compression is resisted by simple transfer between the concrete surfaces.

Now, pre-cast beams are often placed over consoles as in the figure below. Consoles, unlike cantilevers, suffer almost exclusively shear forces and must therefore have "shear friction" reinforcements. The book Design of Concrete Structures (as well as many others) has a description of the method in section 4.9 (pg 160). In new structures these consoles (and the column core between them, of course) should be poured all at once to avoid any joints. That being said, this isn't always possible. If you are reinforcing an existing structure, you might need to create such a console on a column which doesn't have one. You therefore have to deal with a joint between the new concrete of your console and the old concrete of the existing structure. This is an obvious problem since it creates a preferential shearing plane. The shear friction method considers such cases with a friction coefficient $\mu$ which is a function of the type of shearing plane (fully monolithic; new concrete on old, roughened concrete; new concrete on old, non-roughened concrete; steel on concrete). The book linked above has the appropriate coefficients listed on pg 161. 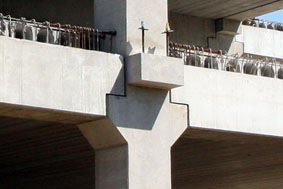 This shows that, yes, pour-joints may have an influence on the behavior of the structure if they are parallel (or close enough) to the direction of the load. If a beam were poured with vertical joints, it would create a preferential shear plane which would be quite tricky to reinforce. If a partially-loaded column (where the axial load is concentrated in a sub-region of the column's head) were absurdly poured with vertical joints, Saint-Venant's Principle may not really apply and the load may not be adequately distributed to segments of the column not directly under the loaded region.

In the specific case of the pylon mentioned in your question, I'm unsure since I've never designed one myself. As a first guess I'd consider it worrisome to create a horizontal joint near one of the cable anchors since that region must suffer significant shear forces which would be near-parallel enough to make me nervous about the joint behaving as a shearing plane. My completely ignorant, zero-experience approach would be to plan the joints so as to maximize the smallest distance between a joint and a cable. Also, maybe make the joints inclined so as to increase the angle between the cables and the joint (I don't even know if that's plausible in this case). Maybe both.

Not the answer you're looking for? Browse other questions tagged materials concrete reinforced-concrete or ask your own question.

8
What is the practical limit on the number of storeys in residential buildings built with monolithic reinforced concrete?
10
How is the design life of a reinforced concrete structure calculated?
5
Why design a cable stayed bridge with pylons inclined towards the obstacle being spanned?
7
Relative strength of wire mesh vs rebar for reinforcing a concrete slab
1
Why is desert sand not processed to make it suitable for concrete?
3
Percentage area of steel for a retaining wall - standard formula doesn't make sense to me?
1
How will using desert sand instead of concrete sand affect my concrete recipe?
1
Dependency between load capacity for reinforced concrete slab and thickness
0
Turndown for a Post-Tension Concrete Court