For a 3D printing application, I need to have a spinning disc(that I will rotate via geared stepper motors) that will wobble as little as possible. By wobble, I mean that it will only rotate around it's axis and not shift side to side.

The goal is to build a 3d printer that uses polar coordinates rather than traditional Cartesian coordinates. Instead of using leadscrews, I want to instead rotate two discs. Disc 1 is mounted to disc 2 which is mounted to an immobile surface. If I can precisely rotate both, I should be able to 3d print. So the question is how can I mount them such that they don't require much torque to spin and also spin accurately around their axis?

I have ordered some lazy Susan type bearings from McMasterCar, but they wobble too much under use. I've heard that there are axial and thrust bearings and that the ones I ordered are thrust. Should I use a combination of the two (and how would you suggest mounting it?) or should I use the diagonal type that has both combined in one assembly?

The disc is 8 inches in diameter and I would like to keep the assembly thin. The disc is spinning parallel to the ground; if I were to mount the bearing underneath, it would be in compression.

Here is a sketch showing one of the axis: 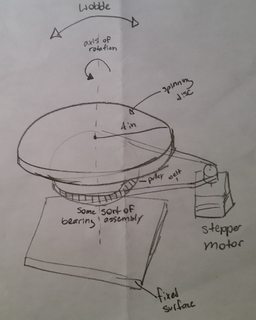 This sketch shows an overview of the whole system: 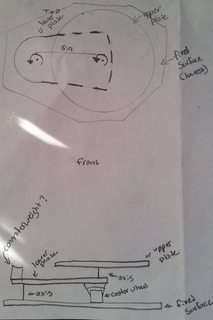 The bearings required will depend on the loads and rotational speeds involved.

In the situation you describe you will probably have a combination of axial and thrust loads ie the thrust load is the weight of the disk and axial loads come from torque on the drive shaft from the drive torque and unevenly distributed loads on the disk.

You also need to consider how accurately your assembly will be aligned, different types of bearings have different tolerances for misalignment. For a driven shaft you generally need a pair of bearings per shaft so that it is supported at two points to minimise bending loads on the bearings.

For this sort of project often the most convenient solution is to use 'pillow block' type bearings which are an assembly which includes the bearing and a housing with mounting holes as a complete assembly and you can just mount the whole thing to a suitable point in your structure without having to design and build a housing for the bearings from scratch. Again you need to make some sort of estimate of the radial and axial loads involved and choose a bearing to suit from the manufacturers specifications.

Additional thought : the situation you describe is broadly similar to the hub on a rear wheel drive car so it might help to look at the way that hubs are designed. It may even be that an off-the-shelf hub unit from a lightweight vehicle/robot (or perhaps an industrial conveyor) would be the easiest solution rather than designing and making something from scratch

5
How to mount timing pulleys/belts for small DIY project

2
How to describe the rotation of opposite ends of a body due to an applied moment
4
Selectively rotating (engaging/disengaging) one of 80 couplings on a small shaft?
0
Quiet Turntable Bearing for 3D Zoetrope
4
Radial vs thrust bearings for assembling a lift mechanism
0
How to build a steel flat bar rotating mechanism using an axle hollow shaft?
-1
Appropriate bearing to spin a dove prism?