Note: The transfer medium is chemically treated water, the maximum temperature is around 100 °C at 4 bar.

As stated the problem is probably not well enough constrained.

Given the specification, the way you get minimum temperature out is to pump as much volume as you can through the primary and then regulate the input temperature to achieve desired output.

I.e. the more primary flow there is the lower delta temperature drop you need in the primary side. Pumping "flat out" may not have been what you had in mind.

k is an efficiency factor for your heat exchanger.

Even with a perfectly insulated lossless system there will be a temperature delta above ideal due to the thermal transfer resistance of the exchanger.

I assume that heating due to flow / pumping losses in the heat exchanger are ignored (or otherwise they add to the energy available to transfer).

Russell covered this fairly well, but I want to expand on a couple topics he only briefly mentioned, and look at the analysis slightly differently.

First, you should have control over the direction of your flows as well. That is, you should be able to switch the inlet and outlet of the primary flow so that they're on the same side of the heat exchanger as the inlet and outlet of the secondary flow or vice versa. What will give you the lowest possible $T_{p,out}$ is a cross-flow arrangement (i.e., the primary inlet and secondary outlet on one side, and the primary outlet and secondary inlet on the other side.) There must be a temperature difference in the two streams at every contact point in the heat exchanger to have continuous heat transfer, but a cross flow arrangement allows the cold side output to be higher than the hot side output, which is not the case in a parallel flow arrangement, as shown in the image below. 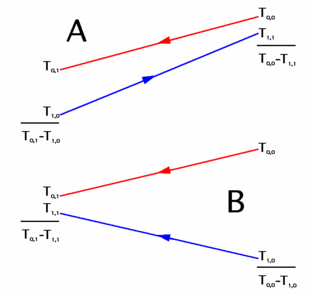 After this, finding the actual lowest possible $T_{p,out}$ is not as simple as doing a few calculations. You have to set up a system of equations that govern the behavior of the different sides of the heat exchanger as well as the boundary between the two flows and then use those to find the lowest primary outlet temperature using an optimization method. Optimization of thermal systems is a semester-long 400-level (undergrad senior, early grad student) college course. This is on the simpler side of those problems, but it's still not something trivial, because you either need a computer program to calculate a bunch of scenarios or use a more nuanced approach that takes less computing power but more thought and consideration, and is more in-depth than we can do here.

where $Q$ is the heat transfer, $\dot{m_p}$ is the mass flow rate, and $h$ is the enthalpy. Enthalpy can be tricky to define if you don't have much experience in thermodynamics, but it's a general way to define the energy in a flow based on temperature, phase, pressure, and volume. For example, it can quantify the energy change when water changes to steam at 100°C. The point is, if we can't change $Q_p$, what we want to do is generally lower $h_{p,out}$. To do this, we can either lower the input temperature (thus lowering the enthalpy at the input, but with the same mass flow rate, the enthalpy difference must be the same) or we can decrease the mass flow rate. This will increase the enthalpy difference, and if the input enthalpy remains the same, the output will get lower.

Note here that there's a limit to how low the output of the primary flow can be. It can't go lower than the input temperature of the secondary flow, otherwise the heat transfer would be reversed; this violates the 2nd Law of Thermodynamics, and in this house, we obey the laws of thermodynamics!.

Not the answer you're looking for? Browse other questions tagged mechanical-engineering heat-exchanger heat-transfer or ask your own question.