Determine the sign of torques for a planetary gear system

I am trying to calculate the power distribution of a planetary gear system, specifically a Wolfrom system like this one: 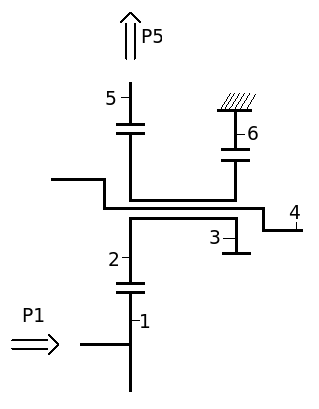 In order to find the output power, I need to find the torque for the rings 5 and 6. Torque and angular velocity of the sun 1 is known. Also I have all the other angular velocities. I am trying to figure out a methodology to design the free body diagram of this system. 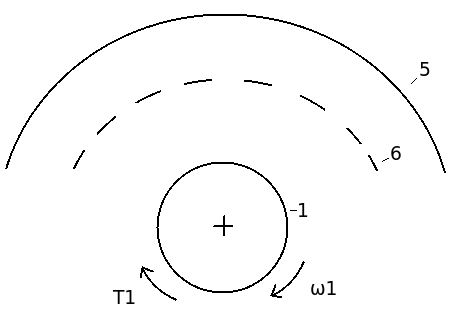 If the positive sign is clockwise, how can I add the torque T5 and T6 to this free body diagram?

In this answer, I'm going to use the sign convention that torques and angular velocities are positive if their direction points to the right (left would be an equally valid alternative for this answer too) using the Right Hand Rule, i.e. seen as clockwise if looking from the left hand side. Any gears spinning in the opposite direction will have a negative angular velocity.

One approach to determining the torques on each gear would be to draw the free body diagram of an individual gear with all the forces (meshing gears, shaft reaction) and external torques (shaft torque) exerted onto that gear. Then, by neglecting inertial forces, use equilibrium to write an expression relating the unknown teeth forces and external torques. An example of this is done for the gear marked with a 1: 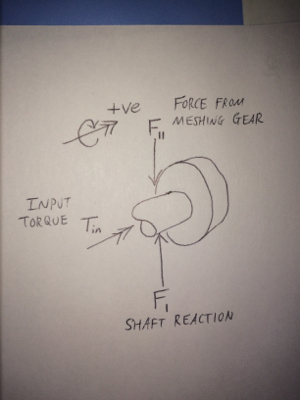 Note the directions of the forces are completely arbitrary, while the input torque respects the sign convention.

Applying equilibrium, and eliminating the shaft force (only interested in gear forces and external torques), we get:

where $r_1$ is the gear pitch radius (approximately) or the distance from the gear centre to the pressure line (accurate, but not needed if ultimately interested in external torques). Repeating this for all gears, it should then be possible to relate the external torques to each other, and determine the ratios of each relative to the input torque, the sign of which ratio indicating the direction of the torque.

For some gear bodies, there will only be forces acting on it. The following example of a gear train should highlight this: 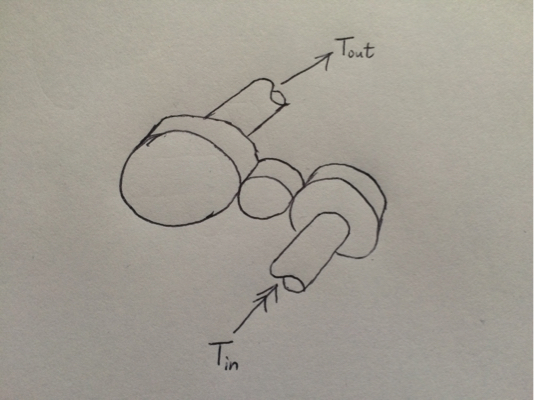 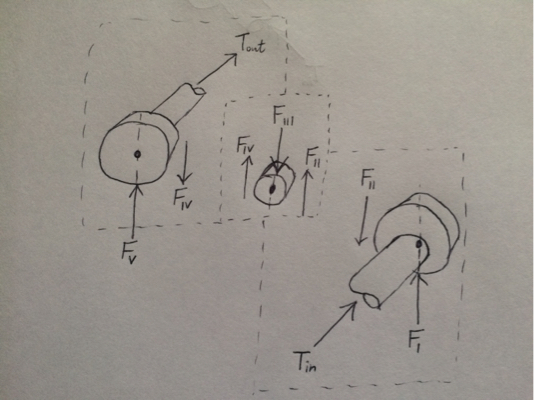 Note how the middle gear has no external torque acting on it. 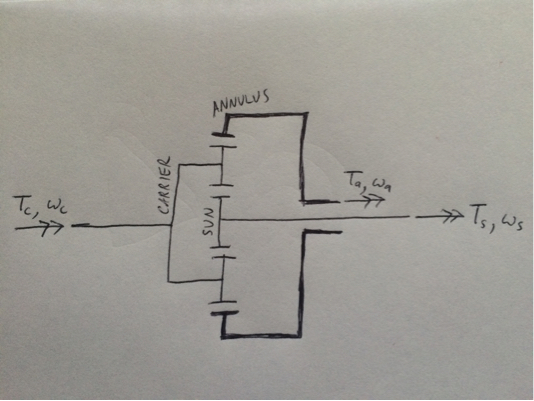 where subscripts 's','c' and 'a' refer to the sun, carrier and annulus gears. $R$ is the ratio of teeth of the annulus gear to that of the sun gear.

Now, we need a power balanced equation: power in = power out. This is where the sign convention comes in handy: since the conventional directions of torque and angular velocity are the same, multiplying the external torque acting on a gear with its angular velocity will give you the value of power in. Therefore, the power balance equation will be the sum of all the power-in products, equal to zero. i.e. In general:

For my example, this is:

Repeat for setting another velocity to zero.

0
Equation for comparing force delivered to road at wheel based on varying gear ratios?
3
How to simulate the Natural Frequencies of a Planetary Gearbox?
3
Would friction forces impact a torque measurement transmitted through a gear box
0
Dynamics of Mass in Epitrochoidal Motion via Ringless Planetary Gear System
2
Reduction System for Gate-opener motor
1
Selecting the right DC motor for horizontal motion
0
Calculating the output torque of a two-input epicyclic gear system
2
Free body diagram of a differential-drive mobile robot