In pre-cast bridges, one often lays beams over the columns and then places thin pre-cast "pre-slabs" over the transversal spans between the beams. These slabs already contain all the requisite positive transversal (between-beams) steel reinforcement. All other reinforcements (positive longitudinal, negative transversal and longitudinal) are then placed and In-situ concrete is poured over the "pre-slabs" up until the requisite thickness. Steel framing contained within the "pre-slabs" certifies that the pre-cast and in situ concrete work together under ultimate loads. Here's an example:

So, how does one calculate the slab's positive transversal reinforcement? The steel must be stressed so as to create a force couple with the resultant of the concrete's compression.

Now, the "pre-slab" needs to be able to withstand a load equal to its own self-weight and that of the wet in situ concrete. If this were calculated by traditional methods, a certain steel area $A_{s,1}$ would be obtained.

The additional loads (paving, moving loads, etc) are then applied as well once the in situ concrete has hardened. These loads are therefore resisted by the force couple composed of compression of the in situ concrete and tension of the reinforcing steel. If this were also calculated by traditional means, a steel area $A_{s,2}$ would be found.

Now, is the resultant necessary steel equal to $A_{s,total} = A_{s,1}+A_{s,2}$? I was initially concerned that there might be an interference in the compression regions, but given that the pre-slabs are usually less than half the total slab thickness (in the example above, a 7-cm pre-slab supports 13 cm of in situ concrete, for a total slab thickness of 20 cm), I don't believe that'd be a problem.

That being said, I'm not entirely certain of this conclusion and would like confirmation or correction on this matter. This summation of areas means that all of the steel would be stressed below their ultimate capacity in the first stage (such that $A_{s,total}\sigma = A_{s,1}f_{yd}$) and then would reach the ultimate stress under final loads (such that $A_{s,total}\left(f_{yd} - \sigma\right) = A_{s,2}f_{yd}$). Is this fine or is there some behavior I'm not taking into consideration?

Obviously, then there's the case where the compression zones of the different stages interfere one with the other, but I'll leave that for a future question.

EDIT: Here's an example of a pre-slab blueprint, including the steel reinforcement. This case is for the pre-slab including a cantilever, which explains the gap: that's where the beam's transversal steel joins with the in situ concrete. The units are centimeters. The "criss-cross" in the cross-section is a steel truss.

This site describes pre-slabs thusly (according to my rough French translation): "The pre-slab is layer 6 to 8 cm thick, creating a sort of base, whereupon once installed on the site, one must add a compression layer." It also has the following picture of a real pre-slab, where the trusses responsible for certifying that the pre-cast and in situ concrete layers work in unison are clearly visible: 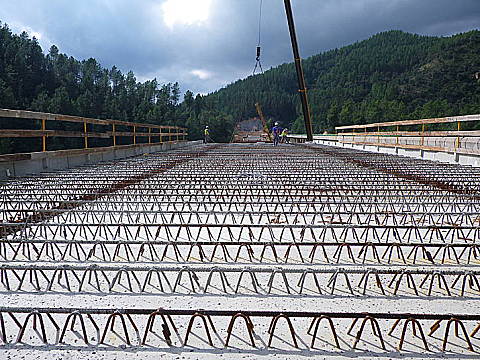 I'm inferring that you're in the UK and this is a real design rather than some theoretic statics exercise. I've not come across pre-slabs before. They're not permanent form work are they?

Unfortunately your solution is somewhat trivial :-( Top slab design can quite involved, and the load analysis certainly is. There's Eurocode 2, BS5400 and it's offshoot, BD44. These will give you the detailed processes to go through. If these pre-slabs are meant to be structural I suggest referring to the codes for how they are to be incorporated into the load bearing design. Those bureaucrats love to include this kind of stuff.

Don't forget that the top surface of the slab passing over the beams might be in compression, so you'll need bottom steel to resist the moments. In this situation a pre-slab would have no effect and have to be ignored. This all depends on the type of analysis you perform, and agreement with the client for your said methods.

Speaking from ignorance vis a vis pre-slabs, I'm still surprised that you only need to consider the wet weight of concrete for it's steel design. This is negligible. You also need to consider construction loads, and I would have expected that there would be a standard loading applied to allow for this. Some paddy is going to want to drive a cherry picker onto the un poured deck. Remember that bridges that fall down, usually fall down during construction when loads are in flux and difficult to quantify.

Bending is only one design criterion affecting the amount of steel. There will also be flexural shear, punching shear, cracking, fire resistance and minimum bar spacings. It might take you a week to design the slab, excluding the load analysis.

Not the answer you're looking for? Browse other questions tagged civil-engineering structural-engineering reinforced-concrete or ask your own question.

1
Sizing plate washers for through-bolting to concrete
7
How significant is a 8,500 lb concentrated load in a large (25+ floors) residential high-rise?
4
Reinforced Concrete Columns - Interaction Diagram Question
11
Should I reject a concrete mix design for having too high of a compressive strength?
2
Do beams in a structure transmit to piers?
7
Relative strength of wire mesh vs rebar for reinforcing a concrete slab
2
How can the shear capacity of a concrete slab be determined for effective depths under 200mm? [Eurocodes]
6
What's the name and purpose of this specific shape of hollows in a reinforced concrete slab?
0
Impact of having flexible electrical hose buried into the reinforced concrete slab