There is a topic discussing the pros and cons of roundabouts. A less common intersection is the Single Point Urban Interchange (SPUI).

This is an intersection that seems to be mostly used on overpasses. What makes this intersection unique is that all of the different exits, on ramps, and crossing road lanes go through the same location, i.e. the "single point". 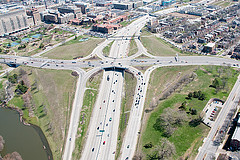 Often it's a lack of real estate for any other interchange. As the interchange is very narrow compared to a partial cloverleaf.

The single point interchange also has a large conflict area in the middle which is less safe than putting 2 intersections next to each other.

Not the answer you're looking for? Browse other questions tagged civil-engineering highway-engineering traffic-intersections or ask your own question.

30
What are the pros and cons of a traffic circle versus a traffic light intersection?

5
How many units of HB are used for steel bridges?
20
Does a roadway bridge experience more load when vehicles are parked or when they are moving?
3
Are crushed cement stones and additional digging necessary when repaving a road?
8
Why are creeks sometimes piped underground in urban areas?
1
When should anti-bursting reinforcement be used?
0
Which polymers are used to make polymer concrete?
4
Why are roads straightened when widened?
1
How do enginners build highway interchanges ? Are highway interchanges build based on a mathematical theory such as braids and knots theory?
1
What kind of splines should be used when planning roads?