This is slightly similar to a question I previously asked but now I decided to simplify the question and model it similar to a design I have in mind.

I sketched out a slightly simplified model. It is a cantilever rod with two supporting rods of slightly larger diameter, connected by a plate. (Ignore the weight of the individual parts. For illustration purposes, I draw this to resemble a cantilever beam from the side view but in actual design, this drawing is actually the top view.) 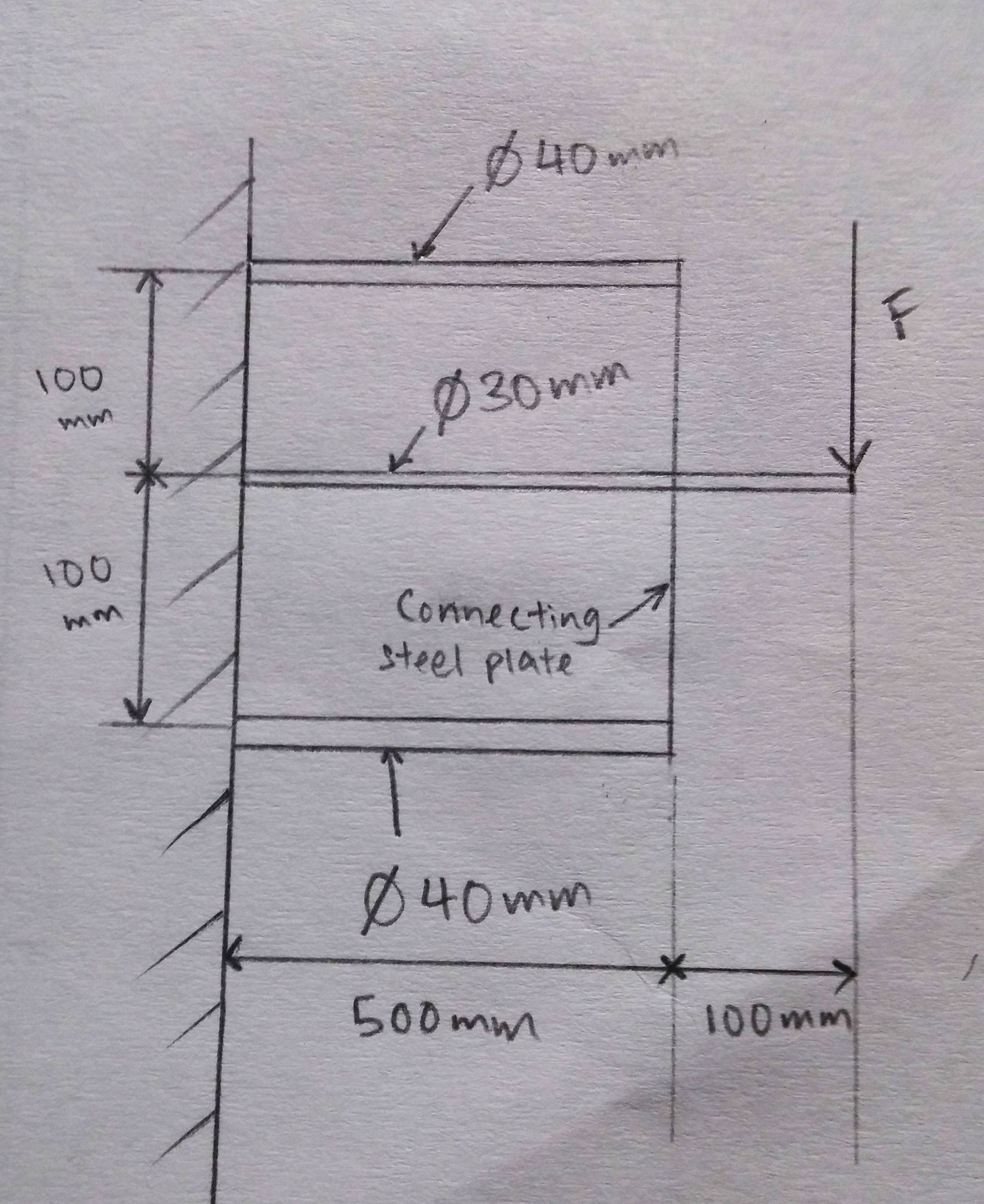 My aim is to calculate the deflection/bending in the rods (more importantly, the two side/supporting rods) due to the force applied. The plate can be considered rigid.

I'll break down the question into two parts, so that I can understand the concept better:

The load at the support in the middle could then be used to get the approximate deflection in the other two beams.

The other answers suggest the use of FEA software. However this answer will instead focus on an analytical approach.

One of the main difficulties of the problem you are try to solve is that it is a statically indeterminate problem. In other words, the structure is more constrained than simpler structures (such as a simple cantilever) such that equilibrium of forces and moments is not enough to solve the structure. This is because, when using equilibrium only, there are more unknown variables than equations. More information is required.

So, to solve a statically indeterminate problem, compatibility must also be enforced, i.e. the structure needs to make sense geometrically. This will make sense later. To enforce compatibility, a method called the Force Method will be employed. 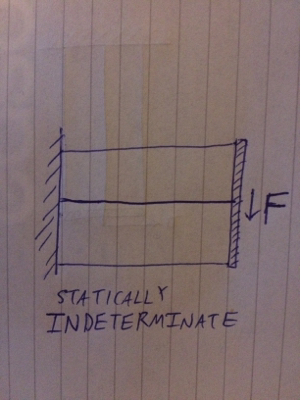 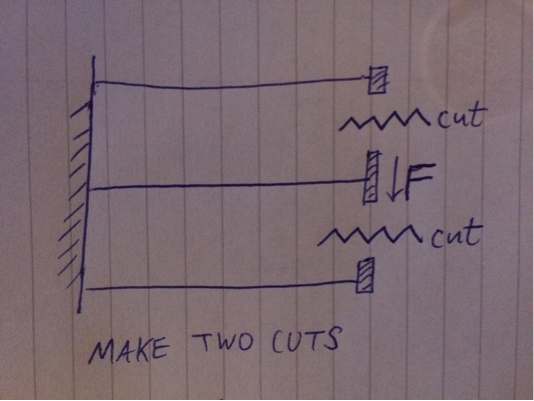 However, by making these cuts, it makes it seem as if the structure does not interact with each other at the sites of the cuts, like the way cutting a rope means one cut end no longer interacts with the other cut end, allowing the rope to be pulled apart. However, this is not the case, and so we need to add forces and bending moments at the sites of the cuts we have made to account for the interaction of the structure at these regions. In the example of a rope, this is akin to adding tension forces at the cut ends. These 'cut' forces are internal forces, and so, at every cut, the forces and bending moments must be equal and opposite. So the forces and moments to add back are: 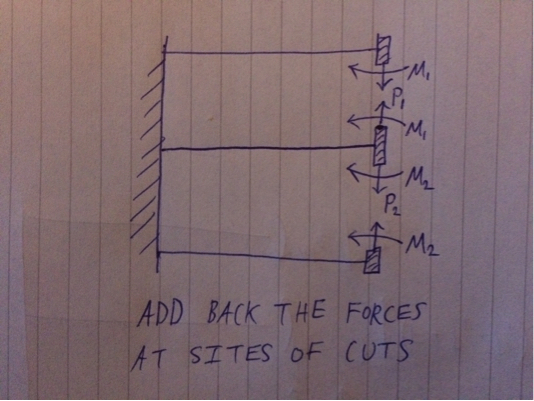 At this moment in time, the values of these forces to add back are unknown variables. So, let us add up all the forces up (the externally applied force in our newly formed statically determinate structure + the cut forces) to obtain three cantilevers: 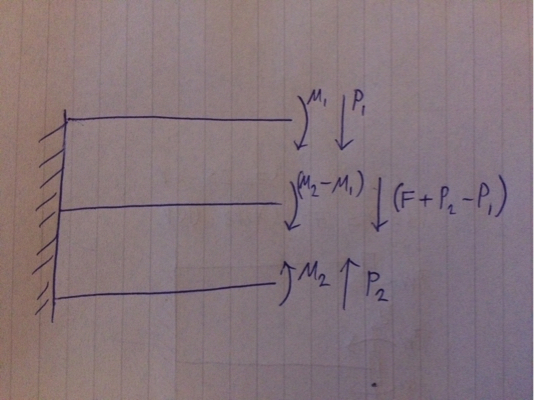 So, you can now easily determine the deflections of these three cantilevers individually, like you would for any other simple cantilever, in terms of $F$, plus the unknowns, $P_1, P_2, M_1, M_2$. The problem now is, how do you solve for the four unknowns? We need four equations after we have exhausted our use of equilibrium! This is the part where you actually enforce compatibility, by using 'compatibility conditions'. In this case, these are the equation forms of saying "we need each of the cantilevers to bend such that the ends are still the right distance apart from each other". Because you have a rigid plate connecting the three ends, you know the distance between the ends will not change. So we obtain two 'compatibility conditions': 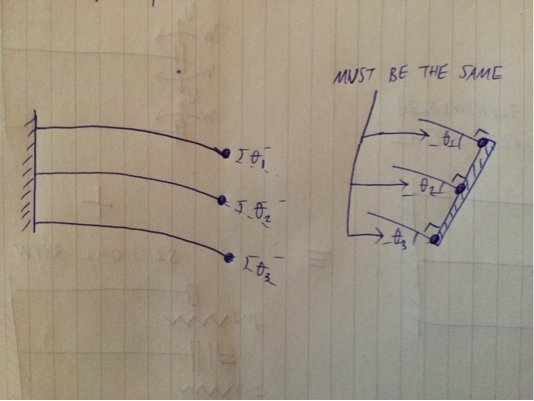 Where $\theta$ is the rotation of each cantilever at the point connecting it to the plate.

Now you easily determine an expression for the deflections of the system as desired!

Have you considered modelling this in some software? You can get a pretty good idea of what is occurring without the hassle of wondering if your hand calculations are correct. I set this up in about 10 minutes (but I'm experienced in the software). I did a vertical load of 10 kN where you had your force and I did a plate thickness of 15 mm and a width of 100 mm (probably a little too excessive). You might also want to consider self-weight. 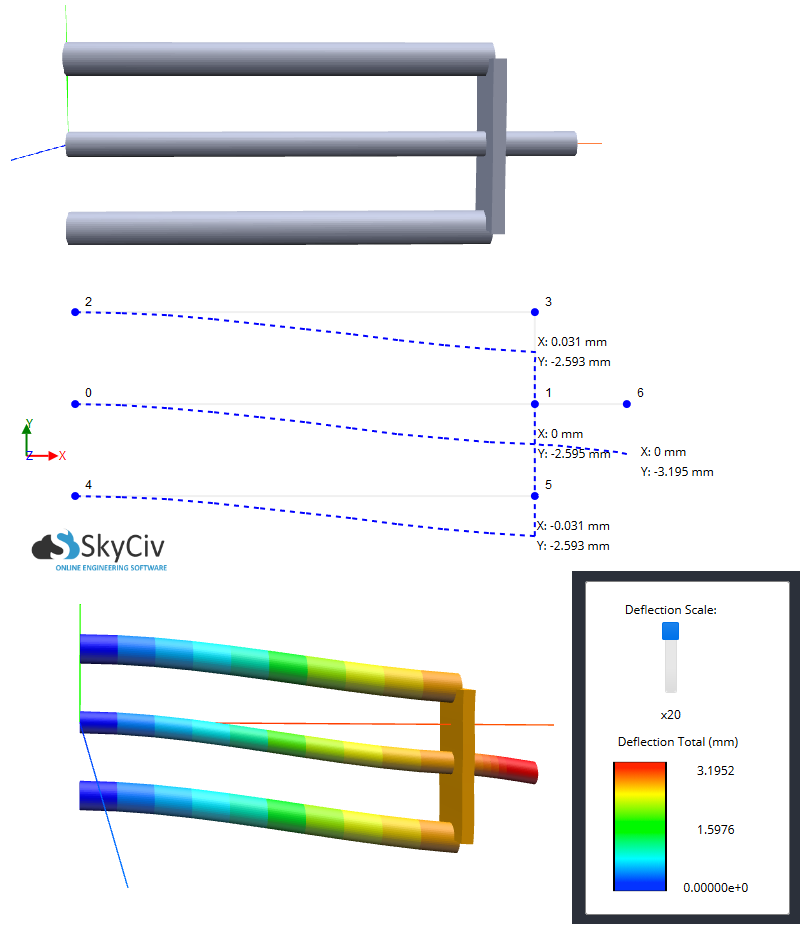 I used SkyCiv Structural 3D for this analysis. It is affordable but powerful online analysis software. You can sign up for a free 30 day trial. You can get started right away because it's all online. If you sign up let me know your username and I'll send you the file that I used to do the analysis and you can make the appropriate adjustments to suit your problem.

Not the answer you're looking for? Browse other questions tagged applied-mechanics structural-analysis or ask your own question.

0
Deflection of parallel rods with force at an angle
6
Fragmentation of a curved cantilever beam under compression
1
Cantilever beam with disc at end (structural mechanics)
2
How to allow only one mode of resonance in a cantilever beam
1
Parallel Axis Theorem for x and y Shift
0
Calculate forces/ torques on a parallel spring array
1
Buckling of Parallel rods
0
Reaction forces on a three support continuous beam with two of them requiring compatibility equations. Superposition method done wrong!