What are sectional views and cutting plane lines?

I am a student in a Drafting 1 class and we are going over all of the section views (full, half, revolved, offset, etc.) and also all about the cutting planes and different ways for that and how to do them in Autocad. Anyways I'm reading from the book and I still don't understand it very well. Could someone here explain it well?

There are a number of different ways to do it, but the most straightforward is with a section view. In a section view, you take an imaginary saw and cut the object along a section plane. Now you have a cut-open car! Now, if you were to look at the side of the car, the passenger's door, passenger seat, ... the entire passenger's half of the car is gone!

Now all that is left is the driver's side of the car, and in looking at it in profile with the passenger's half removed you can now clearly see where the steering wheel lies with respect to the driver's seat.

I put together a crude drawing for you to follow along with below. Note the arrows on the section view - the dashed line shows the person viewing the drawing where the object was cut, and then the arrows show which half you're going to look at. If the arrows pointed down instead of up then you would be looking at the passenger's half of the (American) car. 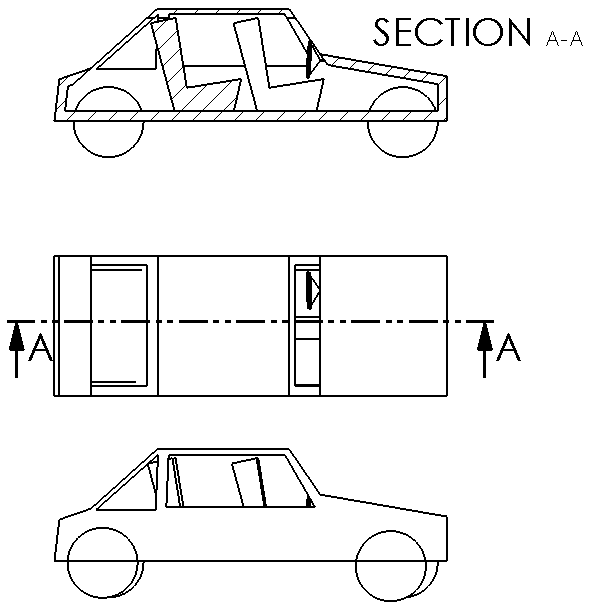 Lastly, notice that hatching /////// or \\\ or XXXXXX that exists in the section view. This shows you which surfaces were cut. Surfaces that are not hatched were not cut. So, in the example above, you could infer that the back seat is maybe a bench seat that spans the width of the car, where the driver's seat is a bucket seat that is not attached.

They're kind of awkward to look at in the beginning, but once you get the concept (cut the object open, then look at the cut surface), then it becomes a lot easier. Section views can show lots of things, but internal features that are otherwise hard to display would be the most common reason I would use a section view.

2
What is the Radius of 1 and 1/4 inch drill on a 1 and 1/4 Circle
1
What is this drawing style that faces the x-y plane but stylisticly pulls the z axis down and to the left?
3
Understanding AutoCAD plugin files by Example
2
Half sectional views of Plummer block
0
How to draw orthogonal lines between two points in AutoCad which will be redrawn automatically if the points are shifted?
0
Are these cut lines?
1
Are un-dimensioned orthographic views permitted on a standard drawing?
2
What are these hidden lines tangent to the circle?
2
How to place a chamfer on the end of an angle cut pipe