My father-in-law would like to install a hinged stair system in his garage that allows him comfortable access to his attic space.

He wants the stairs to swing up flush with the ceiling when not in use, and then to easily swing down when he needs it, and plans on using a set of pulley and weights as a counterbalance to make raising and lowering the stairs easy.

I am thinking of the stairs as a "lever", where the lever itself is the "load" (i.e. the load is distributed). If he places the ropes in the middle of the stair system, then obviously the "effort" is in the middle, while the fulcrum will always be at an extreme end.

My confusion is, since the load is distributed evenly, is this a second class lever or a third class lever? Really I don't care what class it is, but it would be nice to understand how to roughly calculate the weight required to lift the stair system. :)

Obviously we can just install it and keep adding weight to see what works in order to solve the problem, but I'd like to rough out some calculations first to see if there are any gotchas.

I found this link to a related Question, but this situation is just different enough that I can't tell if it solves my problem?

Any hints on what the equation(s) would look like to calculate the required weight (in pounds) to lift the stair system that weighs, say, $L$ pounds, and the ropes are $d$ distance from the hinge?

The answer for this will depend on the location of where you attach your counterweight rope, but the generic solution is as follows:

Suppose you have a staircase of weight $W$. It can be assumed that this weight is centered at the midpoint of the staircase, or $\frac{L}{2}$.

Additionally, suppose you have a countering force of $F$ supplied by your counterweight, at a location of $d$ from the hinge. 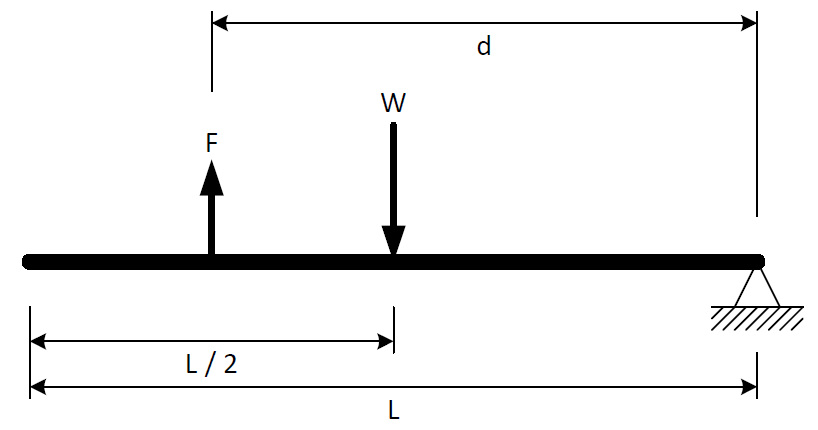 This is a simple balance of moments about the hinge of the staircase, where

You should know everything in the equation except for $F$. Solving for $F$, you find that

You will see that the closer you attach the counterweight rope to the hinge, the larger the countering force you will need. Just think of a teeter-totter on a playground - the heavier kid always wins.

It should be evident, but make sure that you use consistent units when solving this equality (i.e., don't mix feet and inches, etc.). Also, you will want your counterweight slightly heavier than what's required so that it keeps the staircase closed without any outside effort.

If you're looking for a cheap and effective counterweight, drywall screws with sand filling in between works quite well. A concrete block works fine too but requires more preparation and mess.