What is micro-electromechanical systems (MEMS)?

I know definition but how would you explain to complete layik ( as me ) what is MEMS and how it is used.

Examples: Silicon nanopore membranes (SNM) have been prototyped from silicon substrates by an innovative process based on MEMS technology.

One way to think of MEMS is regular mechanical systems, but at a very small scale. Often these tiny systems are fabricated using technology developed for making silicon electronic chips, like nanometer-scale photolithography and etching.

Various physical properties scale differently with linear dimension. For example, simply scaling a ant to the size of a elephant wouldn't work. The mass the legs have to support is proportional to the volume (cube of the linear scale), but the strength of the legs only proportional to their crossectional area (square of linear scale). Such a system can't be scaled up linearly and still function as the original.

As a result of different scaling of different physical properties to the tiny dimensions of MEMS, some things we do routinely at the human scale are impossible, but new things are possible that would be impractical at human scale. For example, rotary electric motors with conventional windings would be extremely difficult in MEMS. However, at such short distances, the electrostatic force can be harnesses much more easily, and MEMS motors using it are quite possible and efficient. At nanometer distances, just a few volts can cause quite significant forces relative to the much much lower mass (remember, mass scales with the cube of linear dimension) of the parts.

The above is just one example, but illustrates how you enter a different world at micrometer or nanometer dimensions.

MEMS is a semiconductor based process that can create miniature structures in silicon. When these structures (sensors) are subjected to mechanical stresses (pressure, acceleration, yaw etc) they are able generate electrical signals. These signals are conditioned using an Application Specific Integrated Circuit (ASIC) to create a sensor system.

Below are some of images representing manufacture of a MEMS differential pressure sensor. 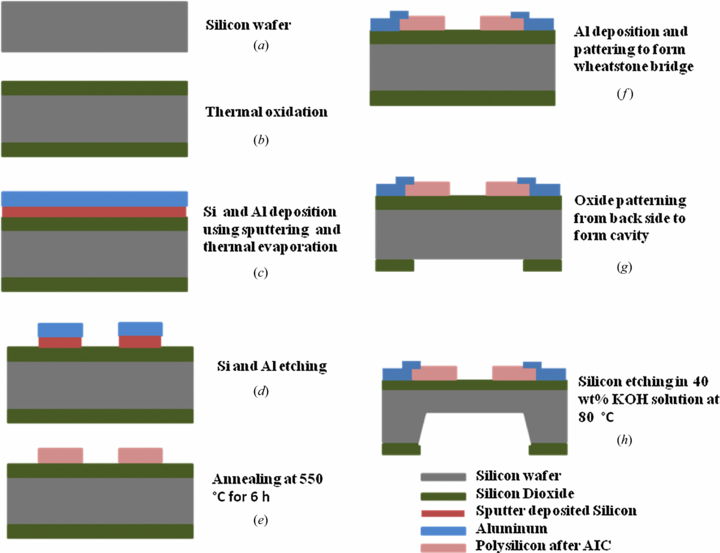 The above silicon structure electrically is represented as below.

28
How to quantify martial arts strikes?
5
How do I conduct an experimental modal analysis with a three-axis accelerometer?

8
Motor for a hydraulic pump in a hydraulic system
1
Confusing symbol in led labeling: How to Obtaining precision with hobby electronics?
2
Why don't most consumer vehicles use kinetic energy recovery systems?
0
How are the location of Gausian points determined in Finite element theory?
0
How does feedback implementation look like in a real word closed- loop process?