How is the shift map of an automatic transmission constructed?

Figure 2 in this tutorial represents the shift map/schedule of an automatic transmission. How is this map constructed? I want to know how to design a shift map myself for another transmission.

The shift map is below: 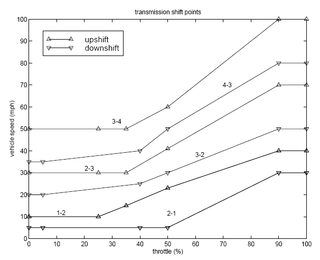 The crucial piece of information is the torque curve of the engine ie. the function which relates torque to engine speed.

Any gearbox, manual or automatic, has two primary concerns the first is to allow access to the desired level of torque at any given road speed, for example changing down to give extra torque for acceleration eg overtaking on a hill. The second consideration is to have the engine at the most fuel efficient RPM for a particular cruising speed. Many automatic gearboxes will automatically change down if the throttle is fully depressed as full throttle is interpreted as a demand for maximum torque.

There are also some circumstances where slightly different considerations apply. For example when traction is limited eg in the middle of a high speed corner or in wet or icy condition it may be desirable to select a higher gear than normal to limit torque and make the torque output less sensitive to throttle input to better control traction. Similarly downshifting in advance of a hazard allows engine braking to contribute to overall braking effect but conversely too aggressive a downshift can lock the driving wheels.

The most basic system simply change up or down at set points to keep the RPM in a defined range. More sophisticated systems may also work in concert with other systems such as ABS, stability control or traction control. But in general the goal is to control the relationship between engine RPM and road speed.

It is also important to consider the gear ratios used as these many not necessarily be equal steps between all gears and gear ratios will be selected according to the characteristics of the engine and the expected use of the vehicle.

The most sophisticated systems will aim to emulate the sort of decisions that a driver makes when selecting a particular gear with a manual box. These can also be linked to engine mapping to create different modes related specific road conditions or to achieve a balance between performance and economy.

In high performance cars these modes may also be related to differential and suspension settings and include modes for standing starts and overtaking.

The specific characteristics of an engine's torque curve are often referred to 'drivability', it is generally desirable that an engine has a predictable response to throttle and a reasonably flat and linear torque curve or at least a broad RPM range where this is the case.

It is written approximately at the end of the article:

" The engine torque map, and torque converter characteristics used in the simulations are shown in Figure 10 and Figure 11."

So I guess, the map/schedule is built from the graphs.

Not the answer you're looking for? Browse other questions tagged mechanical-engineering automotive-engineering power-engineering or ask your own question.

5
What is the difference between an automatic transmission and an automated manual transmission?
4
How to Calculate Mean Radius of Irregular Contact Face (Torque Transmission)
1
motion equation of rotor and stator
5
Make something that turns yet locked in place
2
Non-Clutch Vehicle Drivetrain - How Does it Work?
0
How to rotate the blade?
4
How does my automatic car shift without complete temporary loss of acceleration