Can a magnetic lock be negated or overcome by a stronger electromagnet?

Magnetic locks seem to be fairly common on the doors of modern buildings, but I question their reliability when compared to a traditional, mechanical lock. I realize that the strength that it would take to actually pry a door away from a good electromagnetic lock would certainly be enough to damage the door or frame, just as it would be with a mechanical lock.

If you had an electromagnet strong enough, however, wouldn't it be possible to negate a magnetic lock by fastening your oppositely-polarized electromagnet on the outside of the door opposite the magnet on the inside so that, when activated, the outer magnet would overpower the attraction between the inner magnet and the magnetic material on the door, effectively opening the locked door?

If so, I feel this would be a pretty big disadvantage when compared to a traditional mechanical lock. Not that a powerful and portable electromagnet is necessarily a readily available and affordable thing, but...

Ignoring the practicality of actually owning and operating such a powerful electromagnet, is this even a plausible thing to do?

I think it may be possible but more difficult than it first appears. 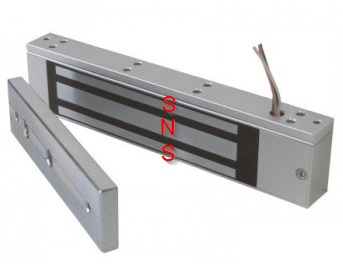 I don't know this, but I suspect that the three poles are arranged as south-north-south (or vice-versa) and that the coil is wound, pushed into the black slots and potted in position. Once the (electro) magnet hits the keeper the magnetic circuit is closed. As anyone who has played with a horseshoe magnet will know, opening the closed loop is very difficult. Interfering with this closed circuit from outside would be very difficult due to the relatively low permeability of the air relative to the iron. Iron is about 5,000 times more permeable than air.

Here we can see that with the lock open the exposed faces are poles of the electro-magnet. Note also that the magnetic path is twice as wide in the centre pole as on the upper and lower poles so that flux density is fairly constant. Once the lock closes the flux forms a loop through the iron core.

I would think magnetic cancellation is unlikely to be practical.

A lot of the responses here are very interesting but the inverse relation of magnetic fields and magnetic strength must be considered. if two attracting magnets are a certain distance apart (say 1 inch) their attraction is for example 2lb. if the two magnets are 1/2 inch apart their attractive force is 4lbs and a quarter inch 16 pounds. all simplified numbers. In a magnetic lock, the two units are touching and therefore very strong. any external magnetic force applied to the outside of a door would be the thickness of the door (plus a little) away from the electromagnet. to overcome a mid-range magnet of 800lbf you would need a much much larger electromagnet (exponential). this seems to be as much of a physics question as an engineering question. If you have an hour, this guy is very engaging and demystifies magnets and electromagnets in one shot. it is filmed 10 years ago at UC Berkley but is meant to be understood by the likes of me so that is saying a lot...

1
Can you use an electromagnet to break the connection of a permanent magnet?

17
Can we change steel properties by application of magnetic field while quenching?
4
How can I determine how many cycles to average for when taking a measurement using Lock-in Amp if I know sensor spectral noise density?
4
Selectively rotating (engaging/disengaging) one of 80 couplings on a small shaft?
4
Where can I find a lock that can do this?
1
why is the outside of an electromagnet not magnetic?
4
How Can You Calculate Force to Overcome Friction From an O-Ring Seal?
1
Can magnetic stripes be read wirelessly with lasers or other technologies?
1
Can you use an electromagnet to break the connection of a permanent magnet?
1
What kind of magnetic water conditioner can industrial sinter plant use?
10
How do vending machines prevent people from stealing goods?