Let's say I have a bar attached to the rim of a rotating wheel, 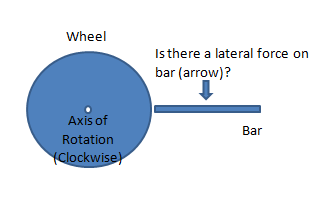 , and it's in a vacuum so we can ignore drag.

In the real world it's not in a vacuum and hence there is an additional force acting on the bar, caused by drag. This drag is lateral to the bar.

5
How to transfer rotational energy into lateral energy only when rotating one way?
4
Selectively rotating (engaging/disengaging) one of 80 couplings on a small shaft?
2
Understanding net torque from an actuator
1
How does a single pivot side-pull caliper bicycle brake work?
3
Does the Rim of a wheel handle all the compressive force?
3
Mechanism to translate rotation into reciprocating horizontal movement
0
what design features allow a milling machine to withstand lateral pressures against the bit