Why choose approximation over interpolation to implement digital lofting?

Before widespread use of digital computers lofting was done using a thin flexible strip, called spline, held in place by a series of weights. This technique is a type of interpolation (curve exactly passes over sample points) using a physical analog model (minimal potential energy of a thin flexible beam). 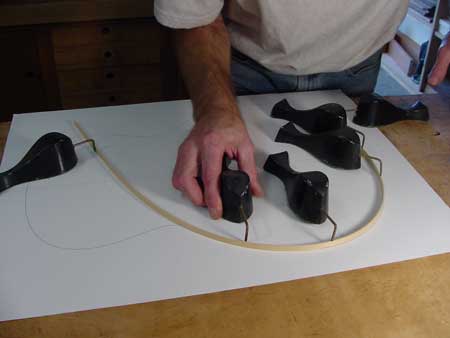 With the advent of digital computers and CAD tools, engineers developed a digital version of lofting splines, but instead of using a similar interpolation technique they chose an approximation technique by means of distant control points called NURBS.

With an approximation approach you need to perform an iterative process to manually fit a curve to the desired path. In the field of graphic design this may not be a drawback, but in the field of engineering, where accuracy is a maximum, an interpolating approach is much more useful because you can easily interpolate smooth surfaces from a few sample points (analogous to use a lofting spline or a set of French curves). Why was this decision made?

I clarify that this is not a question about a particular software, but on the history of the development of CAD tools.

I think your history isn't quite right here. The first widely-used CAD systems used Bezier curves, where the end points of each section do lie on the curve. For cubic Bezier curves, the intermediate points also lie on the tangent lines at the end of each segment. This corresponds quite closely to the constraints that are implied by using a physical drafting spline as in your image.

Bezier curves are still used - for example to define the character shapes (glyphs) in digital fonts.

The next step was the realization that there are other mathematical ways to express the same curve shapes as Bezier curves, which are more convenient for some purposes. A commonly used alternative is B-splines, which can represent everything that Bezier curves can do, plus the capability of having discontinuities of slope (i.e. "kinks") along the length of the curve.

This is valuable in CAD software because there is no difference in the math required to handle a polygon made of straight line segments, or a smooth curve.

But B-splines were not the complete solution to the problem of computer geometry, because they can only represent approximations to circles, and engineers just love circles!

Nurbs (Non-uniform Rational B-splines) were the next level of generalization. The key feature of Nurbs is that they can represent curves such as circles and ellipses exactly. The math required to work with Nurbs is more complicated than for B-splines, but you can write "real-world" CAD software that uses Nurbs to define every geometrical object. Since there are now well-established software libraries to do the math that underlines Nurbs geometry, you don't need to understand the math in detail to be able to use it in developing new CAD application software.

International standards for defining and transferring CAD geometry between different computer systems, like IGES and STEP, use Nurbs geometry as their basic mathematical foundation.

Other types of splines have been proposed, including "minimum-energy splines" which model the behaviour of an idealized physical spline as illustrated by the OP), "minimum-curvature-variation splines", B-splines with an extra "tension" parameter to allow the user to control the amount of curvature at different parts of the curve, etc.

In reality, there is no universally accepted objective criterion for judging the "best" spline. This http://levien.com/phd/LevienSequinCAD09_014.pdf discusses some of the issues, and includes the results of a survey in which the minimum-energy spline fit was not subjectively judged to be the "best" fitted curve.

Since Nurbs or B-splines can approximate any spline shape to any required degree of accuracy, the debate about what is the "best" shape is perhaps not of critical importance - you can learn how to use whichever type of spline your CAD system provides to produce the result that you (personally and subjectively) like best. An important practical issue is the "stability" of the spline fit, i.e. whether a small changes in the control points can produce undesirable large and non-local changes in the spline shape.

You are conflating two different ideas here, probably by accident. The spline curve achieved with a spline and ducks is a minimum energy curve. The defining points have support over the entire length of the spline, meaning moving one affects the entire length of the curve. That doesn't seem to be the thrust of you question, but it plays a major roll in the history of surface representation. By contrast, with nurbs and subdivision surfaces, control points exercise local control, beyond which the surface is unaffected. When designing a surface, it is often very useful to be able to say with certainty that some variation is localized. Imagine wanting to run a series of different ship bow designs through a performance model, all affixed the same aft hull.

In many applications the fact that a single control point only influences those intervals where it is active is a highly desirable property, known as local support. In modeling, it allows the changing of one part of a surface while keeping other parts unchanged.

Now for what you did ask about - interpolation vs approximation schemes. These can apply to either case - local or non-local, but the effort required increases as the span of the variation increases (ie. using higher order nurbs).

There is no reason why you can't define B-splines using only points on the curve. If your CAD system won't let you do that, it's a limitation of your CAD software, not of the spline formulations. It doesn't require any math beyond high-school algebra.

That is a bit disingenuous with respect to the algorithms needed to pull off interpolating schemes. It requires an optimization step not found in approximation schemes. These have to be implemented with some care.

Not the answer you're looking for? Browse other questions tagged mathematics software drafting or ask your own question.

1
How do you implement a pattern over a bent plate in Autodesk Inventor?