What is the purpose and cause of disposable syringes being single use only?

What's the mechanism behind disposable syringes jamming? How do you prevent this from happening or reverse the effect? They are a lot cheaper.

The problem is that once the syringe is pressed all the way in, the plunger sticks and can not be pulled back out.

There's a story on them at PBS. From the article:

A nurse injects a patient with a syringe of antibiotics, reloads and moves on to the next patient in line. The syringe isn’t sterilized, the needle is not replaced, and the patient is at risk of contracting a disease from the very shot that is supposed to cure him.

About 40 percent of all injections are given with unsterilized, reused syringes and needles, reports the World Health Organization. An estimated 1.3 million deaths — and 21.7 million new Hepatitis B infections — occur each year as a result of the unsafe practice.

The devices, called auto-disable syringes, jam up after one injection and can’t be reused. The casing is engineered to break if someone tries to forcefully refill it.

Regular disposable syringes can also make their way back into the marketplace after being used. People will take syringes from a health clinic’s trash, wash them and repackage them for resale.

“You can find in a market a perfectly well packed syringe, then you look closely and you can still see some blood in the syringe from the last person,” he said.

The article continues with all the reasons you can think of for not wanting to re-use a syringe.

The syringe appears to be invented by a company called "Star Syringe", who has licensed their intellectual property to 13 manufacturers. From their website:

A small ring etched on the inside of the barrel allows the specifically adapted plunger to move in one direction and not the other. After one complete injection is given the plunger will automatically lock in place and break if forced, thus rendering the syringe useless.

The following graphic is from ZDNet 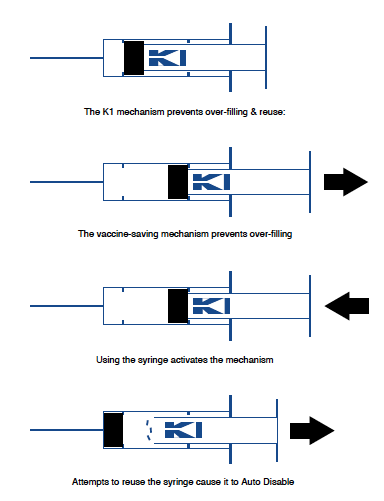 Finally, there's a video on YouTube that shows the operation of the syringe

5
How to transfer rotational energy into lateral energy only when rotating one way?
4
What is this contraption?
0
What paint to use for laser engraved (aircraft and not only) panels with backlighting
3
Friction clutch and the force required
0
What are rules of thumb for designing a gravity feed system for cylinders?
3
What mechanism do I use for this pen-like design?
1
Push button design for small gadget
9
How to work on big CAD project in team?