How in Rankine cycle the turbine generates more power than the pump takes?

In Rankine cycle there's the boiler where water gets boiled into overheated steam. On input there's a pump that delivers more water, and on output there's a turbine that picks up the energy of the compressed steam. 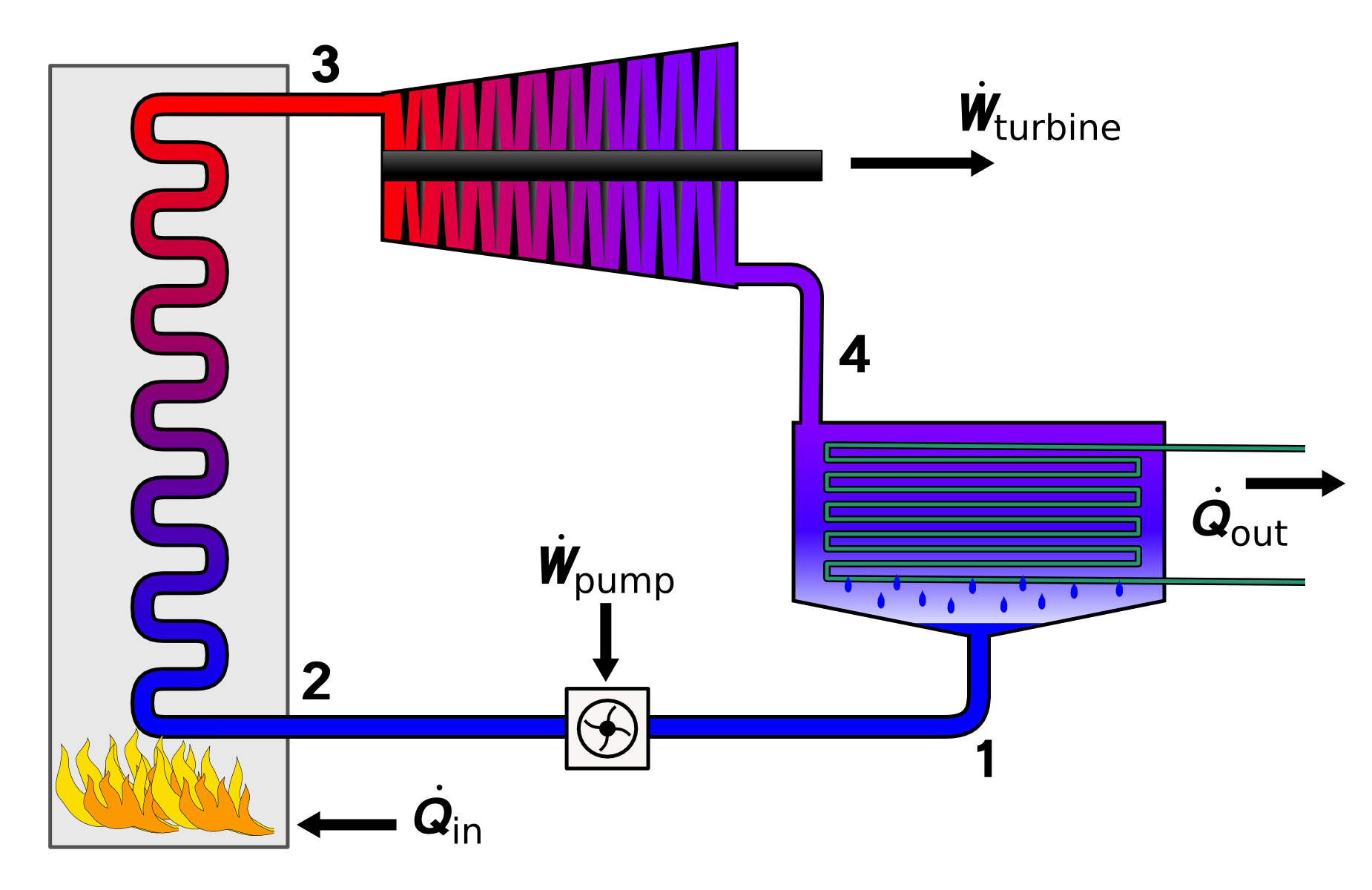 The steam pressure is roughly identical against the turbine and the pump; the pressure of the boiler section.

What makes the steam power the turbine instead of backing up and forcing the pump to turn backwards? - well, this one is simple, power delivered to the pump. But then how comes the turbine produces more power than the pump takes? The pump, after all, must overcome the same pressure that propels the turbine and deliver the same amount of water that is being ejected as steam. I'm missing some significant element of the device. What is it?

Pressure is force/area, if the area offered by the pump impeller is smaller than the area against wich the steam must force its way out of the boiler, and both the turbine and the pump are linked, then, the same pressure will result in a smaller force on the pump than on the turbine.

But, as what gets pumped inside the boiler is liquid water, and water as a liquid has a much higher density than steam (meaning the same volume holds more mass as liquid than as gas - besides the fact that liquids have a fixed volume while the gas can expand), when that small volume is pumped into the boiler as water, the thermal energy added to the system will expand this mass into a steam that has a lot of pressure and much less density, so to get the same mass of water (as steam) out of the boiler via the engine, you will need a much bigger swept volume than the one you used to put that water inside, resulting in a difference in forces exerted by this gas over the piston of the pump (via the incoming water column) versus the engine piston, deciding the direction towards wich the system will move.

In other words, the ability of the water to change phase and occupy a bigger volume than the fixed volume liquid results in a net power gain into this system. From where comes the energy to cause the phase change, which then causes thisincrease in pressure? It's from the heat source. Where goes the energy rejected? It goes out of the condenser, where steam becomes liquid, losing volume, to be injected again into the boiler as a smaller and fixed volume liquid, and so on...

The main reason is that it takes much less energy to compress a liquid than a gas by the same pressure difference. The pump takes a little bit of energy to compress the water, but a huge amount of energy is released when the steam expands in the turbine. This is why a phase change is used in the Rankine and related cycles.

You can see the difference in energy between gas and liquid compression when looking at an enthalpy-vs-pressure table.

There is a pressure differential across the turbine which prevents the pressure from backing up.

On the above chart between point 2 and point three the fluid passes through the turbine which expands while it pushes the turbine and reduces pressure. If you ignored the shaft and rotation of the turbine that point could almost be replaced by a nozzle with the same effect on the cycle.

From your description it sounds like you're describing a pumped storage system or you are ignoring the heating/combustion stage (point 4 to point 1 on my chart). This stage is what increases the pressure of the system beyond the pressure that the pump creates.

Not the answer you're looking for? Browse other questions tagged thermodynamics steam or ask your own question.

5
Can a boiler feedwater injector be used to compress air?
6
Why use steam in the rankine cycle?
4
Why do we need to condense steam in the rankine cycle?
1
Can it be more efficient to pump heat into warmer water than cooler air?
1
Why is more steam required to turn a steam turbine when electric power consumption is higher
0
Other working fluids in Rankine cycle power plants
2
Why not drive an air source heat pump domestic heating system with an auto engine?
0
How to derive phase equillibrium criteria for more than 2 phases mathematically?
0
Steam cycle for a boiler / radiator system vs Rankine cycle