Why does the standard $k-\epsilon$ model use zero equation models?

According to Hoffman, the standard $k-\epsilon$ turbulence model incorporates a two-layer approach (inner region and outer region formulations to reperesent mixing length) when it comes to regions adjacent to wall surface $(y^+ \approx 30 - 50)$.

My understanding of the $k-\epsilon$ model is that a two additional equations are added to the system of flow governing equations, one equation for kinetic turbulence energy $k$ and the other is for the turbulence energy dissipation rate $\epsilon$, and the closure problem is solved by using dimensionless groups as boundary conditions such as turbulence intensity, turbulence length scale and hydraulic diameter.

There are two ways of "wall treatment" both feature two layers but at different $y^+$. The general idea is that the velocity gradients in the boundary layer are so high that one would need a very high number of grid cells in order to resolve those gradients. In order to overcome that the flow close to the wall is modeled by one of the following algebraic models (see cfd-online:

Both treatments are based on the Law of the Wall. Numerous experiments have shown that the boundary layer of a flat plate consists of two distinct regions. From the wall until $y^+ \approx 4$ it is called viscous sublayer with a linear velocity gradient and a logarithmic region from $y^+ \approx 30$. Both layers are joint by a region called buffer-layer.

If one chooses a LRN approach the numerical grid needs to fully resolve the boundary layer in the log-region with (rule of thumb) the first grid-cell at $y^+ =1$. The viscous sub-layer is then modeled algebraically.

In case the HRN approach is chosen the first grid-cell should be in the log-region. Both layers viscous sublayer and log-layer are than modeled algebraically. 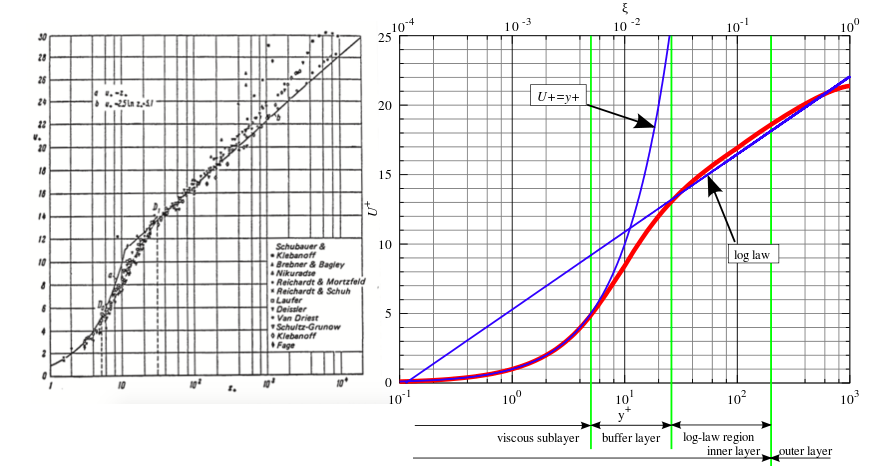 from Turbulence and Transport Phenomena by Hanjalic and Wikipedia

The answer to your question has three parts:

I know that from a CFD point of view (or any time you need a numerical solution to a system of ODEs/PDEs), zero-equation models have two major benefits: 1. they don't need to be integrated by the numerical algorithm, which reduces the computational complexity of the simulation and may improve solution convergence and numerical accuracy, and 2. they don't require any kind of state or history to be maintained (which reduces memory consumption). The cost of this simplicity is, of course, accuracy, especially in regions of high turbulence, flow separation, etc.

Depending on the problem, I usually start with k-e because it's simple and numerically stable, and only after I get a good initial solution and work out all the other bugs in the simulation do I experiment with more complex turbulence models.

Not the answer you're looking for? Browse other questions tagged mechanical-engineering fluid-mechanics cfd turbulence or ask your own question.

12
Which turbulence models are suitable for CFD analysis on a streamlined vehicle body?
13
How do the bubble oscillations in two-phase flows affect the dissipation rate of turbulent kinetic energy?
8
How do I select an appropriate turbulence model?
5
Wall functions and separation in turbine blade simulation
0
Why is there reverse flow in Fluent?
4
How safe is this assumption for turbulence modelling in porous media?
2
Why use different specific heat capacities in the energy equations for incompressible and compressible fluid flow?