I recently had the need to quickly build a fume extractor for soldering, and since at the place there was a ton of 80mm CPU fans lying around, I used those to build something like this (not to scale): 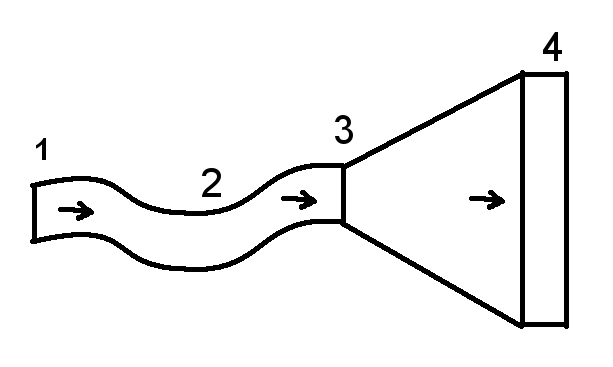 Where the components were (all airtight "sealed" with duct tape)

This thing did its job, but not in any terrific way. So I was wondering if anyone with experience in fluid dynamics could tell me how to improve it, or more specifically which of my ideas to improve it might make sense.

For the sake of this question, lets say the resources are limited to about the items described, reasonable additions that most people have in their workshop included (so e.g. hot glue is fine, but I am not looking for "add a bigger fan" kind of enhancements).

Which of these ideas (or combinations of one additional fan and the other fan configurations) would noticeably improve the performance of the device (that is, move more air)?

If the fans have high air flow but low static pressure capabilities you would be better off with the 2x2 in series to overcome the flow restriction of the dryer hose.

There are other ways to improve flow too...

If the pyramid looks like the picture and assuming your fans are mounted on point 4, and that point 4 is the intake, the cone of the pyramid needs to be much longer. If the fan is mounted right next to a 45deg bend, you are losing airflow just from that. The longer the cone, the less the angle the air needs to change, the better your flow will be.

Also your using expanding clothes dryer hose that is likely ribbed on the inside, if possible run 2 hoses in parallel since I think that hose is restricting your flow.

For the best flow, if you have a large amount of cardboard and tape available, just build a duct out of cardboard that keeps at least the same cross sectional area.

Not the answer you're looking for? Browse other questions tagged mechanical-engineering airflow or ask your own question.

4
Where to place fans for maximum effectiveness in sharing air conditioning between rooms?
5
How to minimize heat loss in an air extractor?
5
Can air suction be increased by consecutive pc fans in small air tunnel?
0
Do 36 inch diameter fans exist that push 25,000 CFM?
2
Cooling with fans in narrow space
1
Cumulative effect of two axial fans
1
Which way to put two fans for a wood shop air cleaner - paralel or series?
0
Extraction Fan Setup