Exact procedure to mount a blanking spade near a butterfly valve

This is a follow on to my previous question about blanking spades. There's a gas pipeline with a butterfly valve mounted between to flanges. I want to work on one side (call it the inert side) and need to close his side with a blanking spade to the other side (gas side). To enter the spade I have to close the valve and open a few bolts so I can push the spade in. But the moment I remove bolts, the force (What's Kraftschluss in english) between the valve and the flange on the gas side is weaker and I get a leak. At least that's what I think happens.

Depending on pressure on the gas side, I either have a gas leak and a potential hazardous atmosphere in the working area, or air infiltration into the pipe and a potential explosion hazard there.

So far all no butterfly valve I've seen could be mounted as a headpiece.

So either there's a trick to it or a short time hazardous atmosphere is accepted (and can be worked around with appropriate safety measures).

So what is the actual procedure to enter a spade into a pipeline in light of this?

P.S. I don't do or supervise these works. I'm just curios how the folks doing it (should) go about it.

You are correct, you can't disassemble a valve that's currently isolating system pressure. This means that you have to isolate the system (at least) one valve upstream of the valve you intend to blank. Note that, if your upstream piping branches between the intended valve and the next upstream valve, you need to shut the valve in every upstream line. This could be a lot of valves and/or could significantly impact operations in other locations.

Typically, the considerate system designer will include a gasketed flange, with no valve installed, just downstream of an isolation valve for every major piece of equipment specifically for this reason - you shut the isolation valve, bleed the system, then install the blank. The valve should, theoretically, be enough to hold back system pressure, but valves leak, so a gasketed blank flange is generally the accepted method of working on a system that normally runs a hazardous fluid (acid, steam, flammable/toxic gas, etc.)

If you are intending to take the equipment down for maintenance on a frequent/regular interval, sometimes spectacle flanges, seen below, are used. It's basically just a quick way to switch from an open pipe to an isolated pipe, but remember - always use new gaskets! A pipe without a seal doesn't! 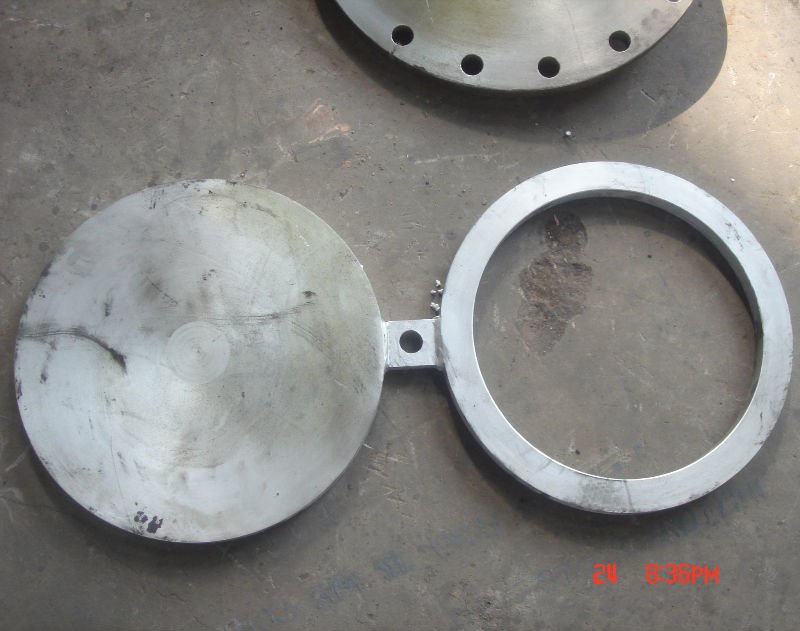 Not the answer you're looking for? Browse other questions tagged pipelines safety or ask your own question.

7
How are blanking spades entered into gas pipelines?

7
How are blanking spades entered into gas pipelines?
4
Can a dry-pipe or preaction valve be used to create a branch off a wet pipe sprinkler system?
0
How to maintain a static negative pressure in a valve?
3
How to remove protective valve cap from CO2 cylinder?