How an airfoil works

What I can't understand is: Why does the air above the wing have to move faster? Because on many sites it is stated that there is a misunderstanding that air moving upwards has to flow faster to reach the end at the same time with the air moving downwards. But that is wrong: https://m.youtube.com/watch?v=6UlsArvbTeo

So why else would the air upwards want to move faster? Why don't they both move at the same speed?

The key to understand the velocity distribution around an air foil is not to look at it independent from the pressure distribution and curvature of the airfoil.

Let's start by describing the flow from the stagnation point this is the point at the very left in the figure where the free air flow hits the airfoil first (leading edge) and move along the suction side to the end of the air foil (trailing edge).
At the stagnation point we have a very high static pressure (imagine holding your hand out of the car window when driving really fast). Around the stagnation point the static air pressure is a lot higher than the air around it. From there on the flow is first accelerated (to the point of maximum profile thickness) and then decelerated (until it reaches the trailing edge).

The flow around and air foil is governed by a set of equations (i.e. momentum and energy conservations). These are the Navier Stokes Equations. Without going into detail the equations are not linear. This means we end up with a chicken-and-egg problem. It means one cannot really answer your question in a step-by-step way. The answer to your question is actually (which is not really satisfactory): The flow field which develops around the airfoil is the only possible state this equation system allows for (conserving momentum and energy).

Where as this sounds really discouraging there are some patterns which occur.

Let's look at an example: 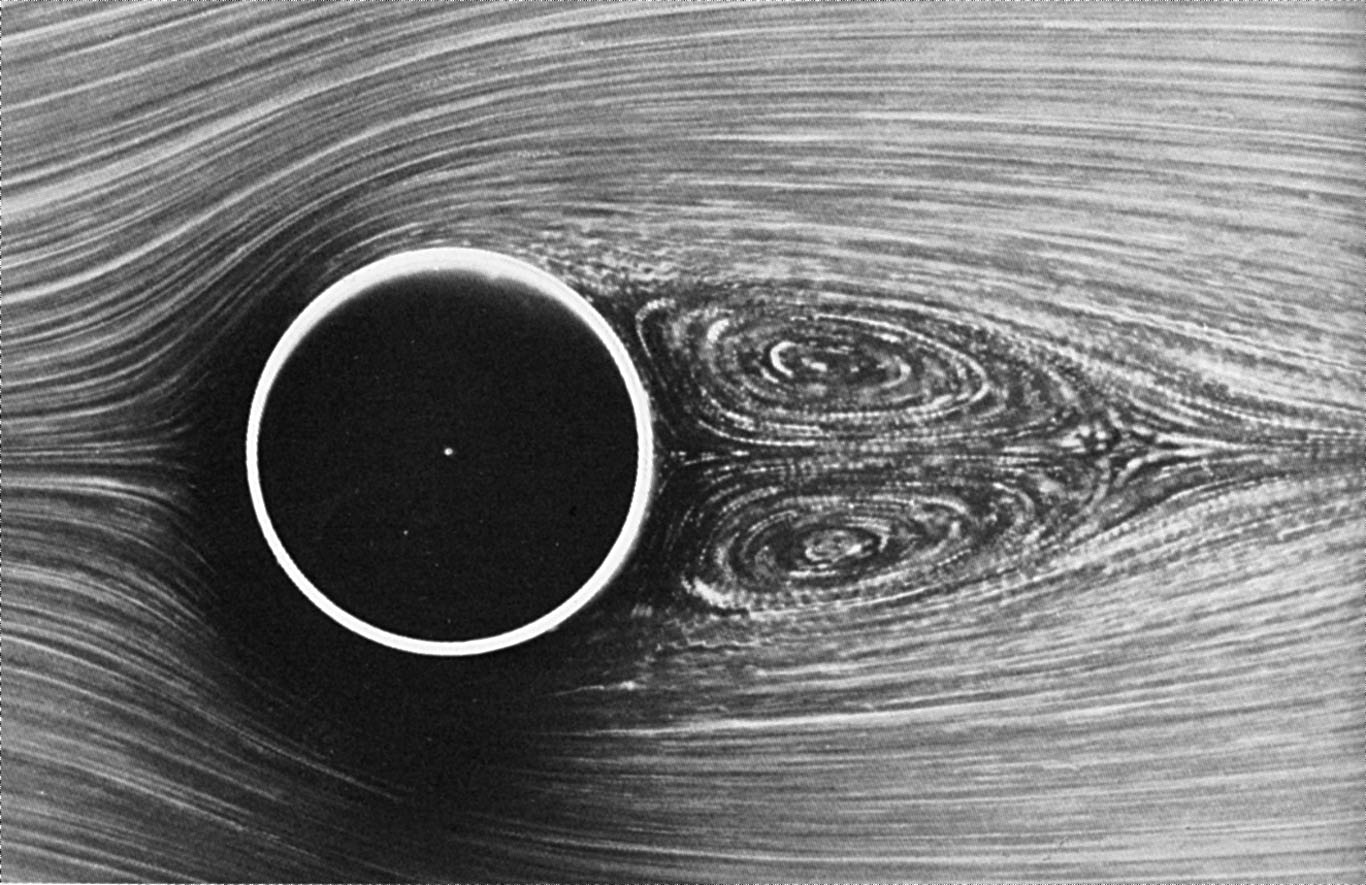 The flow which is approaching the cylinder (left to right) is converging in front of the stagnation point. The distance between the streamlines is getting smaller and the flow is moving around the cylinder. This happens because the high static pressure at the stagnation point pushes the air away from the cylinder and thereby compressing the flow.
When the flow has reached the top (or bottom) of the cylinder, the streamlines diverge. The distance between the stream lines increases because they flow towards the centre line. In order for the flow to flow inwards the pressure has to be lower than the surrounding air. This lower pressure sucks the air inwards, you might also say the higher pressure of the surrounding air pushes the air. 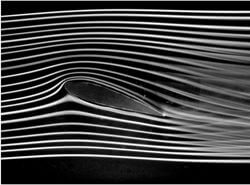 The stream lines (across the suction side) converge first and diverge than until they reach the trailing edge. This means the pressure at the upper side of the airfoil has to be lower. The opposite is true for the pressure (lower) side of the air foil. Here, the streamlines converge which means a higher pressure is present.
When summing up all the pressure forces around the airfoil there is a net-upward force.

I know that this all sounds kind of mambo jambo. The reason for it is, that the model which is used in most of aerodynamics is continuum mechanics. So in a way you are asking why is the model behaving like this, where we actually told the model to behave in that way.
Our model of the flow is based on the observation of fluids. It is a macroscopic view of something a lot more complex. In principle we can explain everything based on the kinetic theory of gases but this becomes impractical when one wants to calculate the lift of an airfoil.
However, think of gas as a bunch of air molecules which bounce around. They hit each other or surfaces. The rate with which they hit each other and surfaces is what is responsible for the pressure we use in aerodynamics. This bouncing is extremely high. Now think of the curvature of the suction side of the airfoil. It is curved downwards. When the air is flowing across the airfoils suction side the room the air can fill out gets bigger. This means that the same amount of air-molecules have more space therefore the rate at which they hit will become lower (hence lower pressure), and since they have more room to move the bulk-velocity of all air-molecules will increase in this direction (which results in higher velocities).

You are partially right. The air does move faster on the top of the wing than at the bottom. This is true, however as you pointed out the reason for that is not that 2 air molecules enter the wing at the same time and due to the curvature the molecule on top has to travel faster before they meet again.

So what happens then? 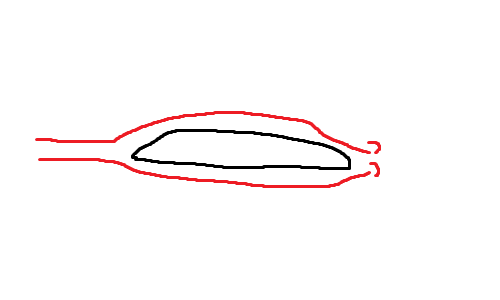 When the airplane starts moving a curl occurs at the end of the wing. 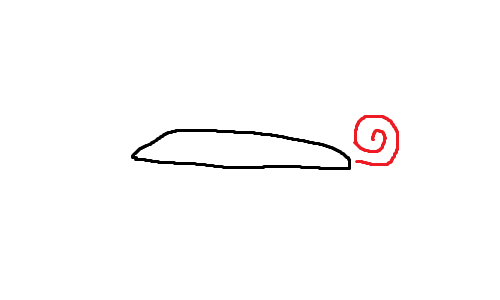 Due to conservation of angular momentum curls always occur in pairs. 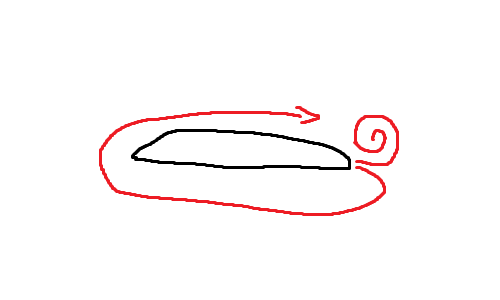 Now you have air that is moved under the bottom of the wing and eventually with the air coming in the direction of the wing it moves over the wing again. And this is the reason why the air moves faster on top of the wing.

References: Mostly memory and this.

The most common error in explanations of aerofoil lift is that it's due to the Bernoulli effect - but who told the air particles that separated at the leading edge that they had to meet up at the trailing edge? The air flowing over the wing does move faster, but that's only part of the story. The air that flows off the trailing edge (and there are no vortices at the trailing edge!) has a downwards component to its velocity. For equilibrium, there must then be an upwards force on the wing.

The Wikipedia article 'airfoil' is instructive, as is: https://www.grc.nasa.gov/www/K-12/airplane/shape.html .

5
What is "Bernoulli-Lift", and why does it only account for 20% of an airplane's lift?
1
If an aircraft's wing blows air downwards, how is the momentum conserved in level flight?

1
What's the maximum water jet psi we can create?
2
What is the difference in CFM, at a given static pressure, between a CPU fan and a Squirrel Cage Blower fan when moving air through ductwork?
0
Unusual idea for fish tank design. Unsure if plausible or not
1
Linear pneumatic actuator opening time - pressurise connection pipe
1
Why does the ball detach from the surface of cup?
1
Can I dismiss wind loads for this solar panel configuration?
0
How can a fan keep spinning normally but suddenly move very little air?