Short form: How would one calculate the perfect shape of a range hood?

See drawing below. Will the curve of the profile of the range hood be exponential? Quadratic? What if the range is enclosed from three sides that create a box open only from the front - what curve should one choose? Sigmoid? Cubic? Some sort of chain curve? How does one calculate the parameters of the curve?

How does one select the minimal air flow necessary to suck the steam in?

I'll start with a drawing. 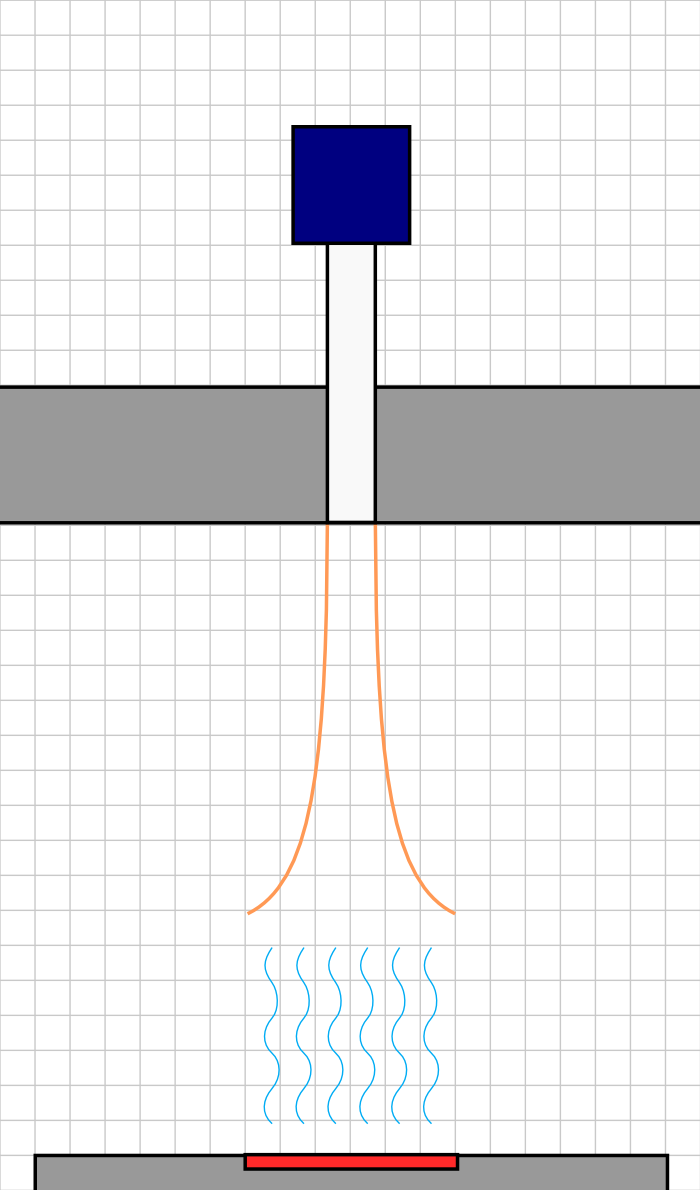 I have added the sections "Fan throughput" and "Transition from laminar flow to turbulent flow".

Assume the range is a 60x60 cm square that produces steam (or 60 cm diameter disc if that's easier). The range hood begins 70 cm above that and is 110 cm high, terminating in a 7cm diameter pipe (which I might have to replace for something wider, but that's what I'm working with right now). This pipe is 80 cm high and terminates in a fan. I assume having the fan in a pulling configuration is better than having it push into the pipe. In addition it'll be quieter (which I would prefer). The fan has a constant throughput and blows into open air.

There is a wall behind the range. There may be walls on the sides but not the front which is where you access the pots. I assume that's better than just having the wall behind the range. As a bonus it will minimize splatters around the kitchen. The walls may also only go part way from the range hood towards the stove if that's optimal. The hood may be wider than the range, but with side walls that might not be necessary. It may not protrude towards the cook.

I have tried to calculate the necessary fan throughput by calculating the expansion rate of heated steam during normal use (one large and one medium heater turned on, a total of roughly $4000\mathrm{W}$).

I am not sure which of my simplifying assumptions are too strong.

Assume the volume above the range (60 cm * 60 cm * 70 cm) is filled with steam at 100 degrees Celsius, normal atmospheric pressure, and is heated uniformly by a 4000W heating element with no heating loss.

Normally, the excess volume would spill in all directions - to the top and to the sides. We want to suck enough air into the top that the whole excess is taken in, so that the sides have negative pressure, i.e. air is coming into the volume from the sides, not out of it, and only escaping through the top. 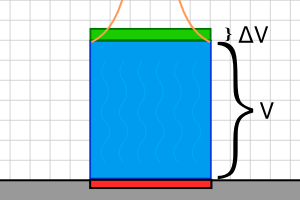 Let us calculate the volume gained over one second:

Plugging everything into Google gives me the answer:

This is the minimum according to the above model. However, the volume in question isn't made out of jelly, and so a lot more suction will be necessary to make sure steam doesn't escape out the sides. My gut feeling tells me around three times more, or 24 liters per second, will be adequate according to this model (but below we reduce this to 5 liters per second in a realistic scenario).

We can compute at what air throughput turbulent flow will begin for our range hood of 60x60cm.

The dynamic viscosity of steam at 100 degrees celsius = 212 deg K can be read off for this table by using this table to get the absolute atmospheric pressure of $14.7 \, \mathrm{psia}$.

The kinematic viscosity of a fluid can be calculated using $\nu = \mu / \rho$ where $\rho$ is the density of steam.

We want to calculate the Reynolds number and keep it under $2300$ for it to indicate laminar flow. Above $4000$ it indicates turbulent flow.

Therefore we are perfectly within laminar flow.

For a circular pipe at $24 \, \mathrm{liters/s}$, we can calculate the minimum radius $r$ to be below turbulent flow thus:

Therefore, we would need roughly a half-meter pipe otherwise we are dealing with slightly turbulent flow.

However, in the real world, we are dealing with air that only contains a portion of steam. The steam buildup will be an order of magnitude less than 8 liters per second (imagine how much water you'd have to put in a pot!). This makes me think that realistically we only need a fan rated about 5 liters per second. On the other hand dry air is only two-thirds as viscous as steam, which will mean turbulence is easier. All in all, with those adjustments compared to our model we can multiply the $Re$ calculated above by 0.3, or in other words, we only need a pipe of 18 centimeters diameter for perfectly laminar flow. A pipe of 7 centimeters diameter which I have will cause turbulent flow.

I understand because we are transitioning from laminar to turbulent flow, the correct profile curve will minimize pockets of air blocked by turbulence, which end up "choking" the flow, further reducing the laminar core and causing even more turbulence.

My experience from acoustics, and horns specifically, gives me the hunch that if the range hood terminated in mid air, the perfect profile would be an exponential curve. However I appreciate that with a horn speaker the pressure changes on the order of 15 Hz or higher, while here we're purely dealing with constant pressure. Also in this case the range would not terminate in open space but in a confined box (cylinder) that's open on one side (say an arc of 90 degrees). Would the best curve then be a sigmoid? Some sort of chain curve? A cubic?

How does one calculate the right kind of curve for the profile connecting the semi-closed box and the pipe inlet?

I assume that the case where everything has a round cross-section is easier than when it's square, but can then be generalized using a little common sense.

I assume there is some minimal air flow that is necessary to suck in the steam. How does one calculate that? I guess this has to do with pressure building up where air flows from the kitchen to the range top; my guess is that you could calculate the pressure of the air flowing past the range, and if that pressure is high enough, the flow will expand to cover the whole available space (i.e. all the way down to the range top). I understand that's a fluid dynamics question, but I know almost nothing on the subject.

Is there a good approach to this problem (the curve profile as well as the that uses the concept of impedance? I understand impedance based approaches only really deliver answers for AC signals, not DC, but perhaps one could calculate the perfect transformer as a limit as frequency tends to 0, or use an approximation (e.g. assume frequency is 0.1 Hz)?

My range hood doesn't really work at all. That is, it's so inefficient that putting my hand just under the hood I don't feel any draft at all. Having looked at it, there are many, many things wrong with it that I won't bother to list - it's just bad, leaks air everywhere, etc. The market doesn't seem to provide any sensible solutions either. Not even the professional offerings seem to make sense from an aerodynamics perspective. That made me wonder what the perfect range hood would be, and I don't know how to approach the problem.

Note: I have posted this on the Physics StackExchange previously, but it was pointed out to me that the question was off topic for that SE, and I was asked to move it to Engineering. It has been put on hold there.

Making a duct that flares along an exponential curve to 2 feet (60cm) in diameter would create a larger duct that won't solve your problem.

It would be an expensive duct to make (think tuba bell), and if you focus on the flare instead of the overall dimensions, then the duct might come down too low and you won't have enough space.

Keep in mind that a flared duct doesn't do anything to move air - that's all done with a fan. The duct also isn't going to generate noise - that's also all done by the fan. If you want a quiet, high-flow hood, get a quiet, high-flow fan. I searched online for "low noise high flow kitchen hood fan" and I found this fan that advertises <0.3 sones during normal operation, with a boost mode of 630 CFM. 630CFM means that all of the air in a 18x18 foot room gets removed every 4 minutes.

It appears to me that you should ignore the hood shape and focus on the fan. At your desired air speeds, for your desired application, the shape of the hood is going to make virtually no difference at all. That is why there is such variety in kitchen hoods.

The same conclusion, this time with numbers!

Consider evaluating the Reynold's number, which "is defined as the ratio of momentum forces to viscous forces and ... also used to characterize different flow regimes within a similar fluid, such as laminar or turbulent flow."

For flow in a pipe, the Reynolds number can be calculated with:

where $Q$ is the volumetric flow rate in $m^3/s$, $D_H$ is the hydraulic diameter (which is just the diameter for a circular tube), $\nu$ is the kinematic viscosity in $m^2/s$, $A$ is the cross-sectional area of the pipe in $m^2$, and $\mbox{Re}$ is the Reynolds number, a unitless number that indicates laminar flow for values under approximately 2300, turbulent flow for values over 4000, and transitional flow between the two.

SO, for air, here are the values I used in the equation:

That's it! So, plugging everything in:

So, where a Reynolds number over 4,000 indicates turbulent flow, at your duct size and your flow rate, you are at 43,000, so an order of magnitude past the threshold for turbulent flow.

This demonstrates and hopefully reinforces my earlier statement, "the shape of the hood is going to make virtually no difference at all," because again, at your flow rate, you're already in turbulent flow.

Since you can't do anything about the flow noise due to turbulence, the best thing you can do for noise reduction is to look at a fan that's designed for low noise emission. This is typically done by increasing the blade surface area while reducing the speed, because one of the largest factors for fan noise is the tip velocity on the blades. See this guide for more information.

Not the answer you're looking for? Browse other questions tagged fluid-mechanics hvac airflow or ask your own question.

3
CFM in relation to Static Pressure
8
Estimating Darcy Friction Factors for Critical Flow
7
Ways to reduce turbulence in internal flows
2
How to calculate the velocity of gas in a pipe?
1
Calculating velocity in pipe flow
0
Turbulent Boundary Layer Thickness as Velocity Increases
1
Mass flow rate (air and steam) through a cylindrical pipe
1
Area ratio using Bernoulli's equation
1
Why does higher concentration of electonic components decrease the airflow requirement for cooling a PC system?