How to prevent static buildup in an electric burr mill coffee grinder?

Every morning when I get up, I use this coffee grinder to grind beans for my morning coffee. 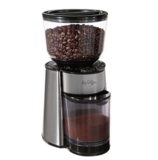 When I remove and subsequently open the top of the bin, I often find that enough static electricity has built up in the grounds/bin that particles of coffee will literally fly out of the bin and onto my hand and the counter, making a mess. Coffee will also be stuck to the sides of the bin to varying degrees, making it necessary to rap the bin on the counter in order to dislodge the particles from the sides. Of course, more then fly out and increase the mess on my counter.

I have made some observations of a few factors that seem to affect this:

My questions are these:

What is the cause of this static charge in the grinding process?

My thought is that the coffee grinder is essentially acting like a Van de Graaff generator. Since the coffee maker likely has a plastic frame, rests (most likely) on rubber feet, and the electrical wiring (most likely) is insulated from the grinding mechanism, you have the potential for charge to be stored in the grinder. If I had to guess, there's probably some insulative gap in the grinder drive train between it and the motor that does not allow grounding of the charge. This may be by design to avoid the potential for electric shock.

Also, assuming you're using it on a countertop that is not metallic (i.e., nonconductive), even of there was a discharge path from the grinder through the body, it can't ground out anyway since the counter won't conduct the charge.

What modifications can the end-user make to either the grinder or the process to prevent static buildup?

I might try soldering a grounding wire to the outside of the burr cone. This would have to be connected to a ground somehow. For example, you could open up an electrical outlet (turn the power off to the outlet first!) and attach the grounding wire to the metal outlet box. The outlet box should be connected to your house's main ground. This will allow the charge to dissipate.

If this had a grounded plug (three-prong), I might just connect the grounding wire to the ground in the plug wire. However, this is not the case for this particular coffee grinder.

Also, dryness tends to be conducive to static buildup. For example, it's much easier to shock yourself on a doorknob in the middle of winter (very dry air) than in the summer (usually humid air, unless you live in a desert or something). Wetting the beans a bit may help too.

How could this be eliminated in the design itself?

If the grinder had more metallic parts, especially in the main frame and the hoppers, and these parts were all connected in such a way as to allow discharge to the ground, it would likely eliminate the static problem altogether.

Without getting into the why of static and grinding, I think the problem always lies with these plastic bins that the grinds end up in. Glass would be much better.

The simple solution which nobody has mentioned here, is to quickly dip a spoon in water and briefly stir the beans adding a few drops right before grinding. Problem solved.

The more interesting question is why does this easy hack work so well?

Not the answer you're looking for? Browse other questions tagged process-engineering product-engineering grinding or ask your own question.