Do curves and bends in an airduct (or airpipe) influence the energy that can be captured from that airflow?

To better explain my question, I've included a schematic below. Let's assume that the water level rises. As the water rises in the wide chamber, it displaces the volume of air and essentially pushes the air through the duct and out through the exit to turn a wind turbine. According to the modified Bernoulli's Principle accounting for frictional losses, the more bends and curves present in the duct, the greater loss in pressure the air would exhibit. However, would that have an impact on the amount of energy that the turbine would be able to generate. Based on the wind power equation:

the power output is only a function of velocity and area, and velocity according to the continuity equation only changes based on changes in cross-sectional area.

There aren't any pressure terms associated with power. So does that mean that the frictional losses from bends and the pressure loss determined by the Bernoulli's Principle don't have any bearing on the final power output? If that's the case, in theory, I can have hundreds of bends, duct reductions and expansions, but what would only matter would be my starting cross-sectional area (A1), starting velocity (v1), and final exit cross-sectional area. However, this doesn't seem true because the turbine can only convert energy that the air flow provides, and there is bound to be frictional losses to heat for every bend and curve that the air faces. 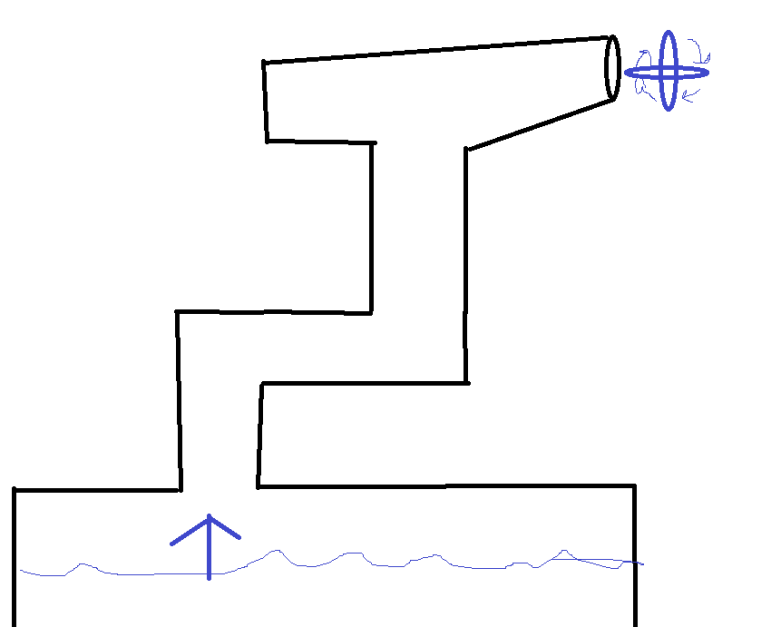 Bends and other changes of direction in airways cause shock losses. The more numerous the number of bends and the tighter the change of direction, the greater the shock loss, with each change.

The rule of thumb is that a 90 degree bend in an air duct will cause a pressure drop equivalent to that of a straight pipe whose length is about 10 to 15 times the duct diameter at the bend. So you do not want any unnecessary bends (or length!) in that air duct.

4
Why does my model of a wind turbine show high RPM with low power output?
0
Design of a small scale air curtain
1
Is it possible to "expand" air flow area in a duct over a short distance?
0
Frictionless Flow
0
Regarding design of a compressed air delivery system based on a screw air compressor
3
I cannot properly understand the "pressure" referred to in Bernoulli's Principle despite my efforts
1
Angular Velocity And Flow Rate Relationship Of Turbine