Is it possible to have an outside bird bath that is self cleaning and doesn't have mosquitos? Could I use a fish tank?

Background
I’d like to put a bird bath outside but before I do that I see problems. I may not be around to clean it daily maybe weekly. So if I can’t clean it it would grow mold and nest mosquitoes. So those are the two problems I would like to solve. I say self cleaning (any method powered or not). At the garden store I didn’t see any fountains that specifically addressed this scenario.

Regarding fish talks, I’ve seen birds use bowls and they sit on the edge of the bowl so the idea of using a deep fish tank (that has some water cleaning) sounded feasible but I’ve never had a fish tank but I’m confident they aren’t outdoor water proof.

It seems easy enough to just connect an electrically powered water valve on a timer and feed it into the to the bottom of the bird bath in order to have it run for 20 seconds once per day to flood out everything to change the water.

You might want to think of measures though in case of component failures if you're not around. You don't want it gushing water for hours on end.

For example, you could put two valves hydraulically in series but electrically in parallel being driven off the same timer. That way if one valve fails the other will still prevent uncontrolled water flow if a valve fails. It would not protect against failures in the timer.

To protect against timer failures when connected directly to the water line, first feed the waterline into a small reservoir tank through a valve, then from there feed the water from the tank through a valve into the bird bath. Run each valve off a different timer. The reservoir is there because two separate timers will never synch up. With the reservoir you can stagger there activation times so that they do not need to synch up yet can still provide water.

I suppose you could forego the small reservoir tank above and set one timer to allow flow in a time interval that encapsulates the flow interval of other timer by enough margin that drift between the timers doesn't matter prevent flow. But we could be talking about a minute or two worth of margin so instead of 20 seconds worth of wasted water per day if a valve fails, it could be a few minutes of wasted water per day.

Alternatively instead of connecting to the waterline you could use a reservoir barrel and you can pump water from it using gravity or a motorized pump. If gravity fed, the valve power might be low enough that it could be battery powered possibly with a solar cell. This way, failure of either the timer or the valve would result in only limited wasted water.

Alternatively you could run a skimmer but that would only clean out stuff on the surface but would do anything about evaporative loss.

A skimmer is basically a water pump with an inlet tube connected to a skimmer head. The skimmer head sits just below the surface of the water opening upwards and sucks in surface water along with anything floating near the surface (such as oil) and runs it through a filter before returning the water.

They often use pumps designed to be fully submerged in the water for cooling purposes. Some skimmer heads are on floaters so it can be used in deep tanks of unknown depth but in a super shallow birdbath of known depth a floater is less necessary but still may be desired to account for sligthly varying water depths. Or the depth might vary so little you can forego a floater and skim a fixed distance from the bottom. You can look to fish tanks equipment and oil skimmers for the coolant reservoir on CNC machines to see photos. 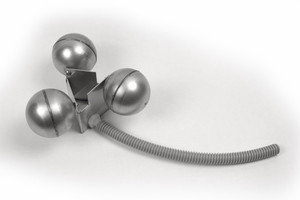 This is one way a floating skimmer head can be. Note this unit isn't just an open tube positioned to sit just below the surface of the water. The inlet tube specifically sits at the bottom of a shallow cup with. The buoyancy is such that the top of the cup breaks the water surface. The cutouts in the sides of the cup near the top are there to allow water near the surface to flow in into the cup. I think they did this to increase suction and corner the floating sludge so that it would get sucked downwards. Otherwise I could see a case where an inlet open all sides sitting below the surface would draw sludge to be over top of it, but then suck in water from the surrounding sides underneath the sludge thereby preventing the sludge itself from getting sucked downwards.

My opinion is that there seems to be little point to a skimmer when you could just flood out a small amount of water. Simpler, more reliable, fresher, and restores evaporated water.

6
Is it possible to fire a ball of water that holds its shape?
4
Is it possible to design a bus that doesn't rock?
4
Are typical worms and worm gears self-locking?
45
Is it possible for a bicycle chainwheel to have a fractional number of teeth?
1
Do fine and coarse screws have different diameters?
2
Drawing best practice and datum self-referencing
1
Would if be possible to have an efficient, diagonal heat sink to save vertical space?
11
Why are most jigsaw blades designed to cut on the up stroke and have teeth that point towards the shank?
2
vertical rack and pinion self-stopping
5
Why does this thing that is not a screw have a screwdriver slot?