Heat added per unit mass in a cylindrical pipe

I have a question, which seems simple, but for the life of me I cannot figure out. So, let's say I have a very thin cylinder (consider an interface), between two fluid with different temperatures. The fluid inside the pipe is flowing with a mass rate of $ \dot{m}=\rho U S $, where $ \rho $ is the density of the fluid, $ U $ is the velocity and $ S $ the section of the cylinder.

where $L$ is the cylinder length and $r$ its radius.
From this equation one could conclude that, if we increase the cylinder radius, the heat per unit mass will decrease, even if $Q$ is proportional to $r$.
If $r$ increases, the volume of the cylinder increases, so even if we add more heat, it will be "distributed" on a larger volume.
But this reasoning breaks down if we increase $L$. In this case, we have both $q$ and $Q$ are directly proportional to the length. Even if, we should also see the effect of the volume increment if we increment $L$.

Have I been too naive in the use of the equations? Or is there something that I haven't caught ?

Heat transfer coefficient is used for heat transfer between fluid and the wall surface, not conduction through the wall. For a steady state, you would need 2 heat transfer coefficients $h_i$, $h_e$ and also wall conductivity $\lambda$. $$\dot{Q} = \left(T_{fi}-T_{wi}\right)\cdot A_i\cdot h_i = \left(T_{wi}-T_{we}\right)\cdot \frac{2\pi \lambda L}{\ln\left(\frac{r_e}{r_i}\right)} = \left(T_{we}-T_{fe}\right)\cdot A_e\cdot h_e$$ Increasing length is a little bit different than increasing radius, because fluid temperature will probably change along the length (in some situations this can be negligible). For inlet and outlet fluid temperatures $T_{fi0}$ and $T_{fi1}$ and thermal capacity $cp$: $$\dot{Q} = \left(T_{fi0}-T_{fi1}\right)\cdot \dot{m}\cdot cp$$

If you are interested in dependence on pipe length, it is better to use a more precise model, where a very short section of pipe with length $dx$ transfers small amount of heat $d\dot{Q}$ into the environment with constant temperature $T_e$ ($U$ is overall heat transfer coefficient per unit length of the pipe), which also changes temperature of the fluid in a pipe by $dT$:

This is a simple differential equation, which you can directly integrate:

This leads to a internal fluid temperature profile along the pipe $T(x)$:

Here is an example: 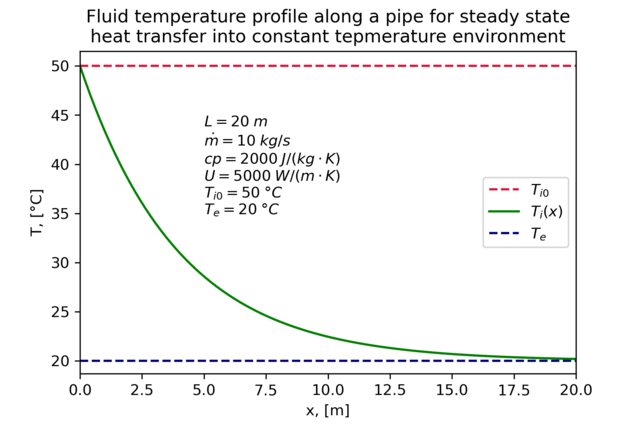 2
Can pressure rise due to heat flux in a pipe?
1
How does pressure energy convert to thermal in incompressible flow?
6
Derive a heat equation for a shrinking nanoparticle
4
If I need a very small heat engine, should I consider external combustion?
6
Multiphase Flow - Energy Coupling Parameter
2
Force applied by fan under inviscid & incompressible flow
0
Average Nusselt number or heat transfer coefficient to compare better heat transfer?
0
Critical Radius of Insulation